Over the years that I’ve been writing for Eve’s Wine 101, I’ve probably used the expression “if you only attend one event per year” often enough that it’s become almost a cliché.

Now I can say “if you only attend one event every two years, this is the one you should attend.” 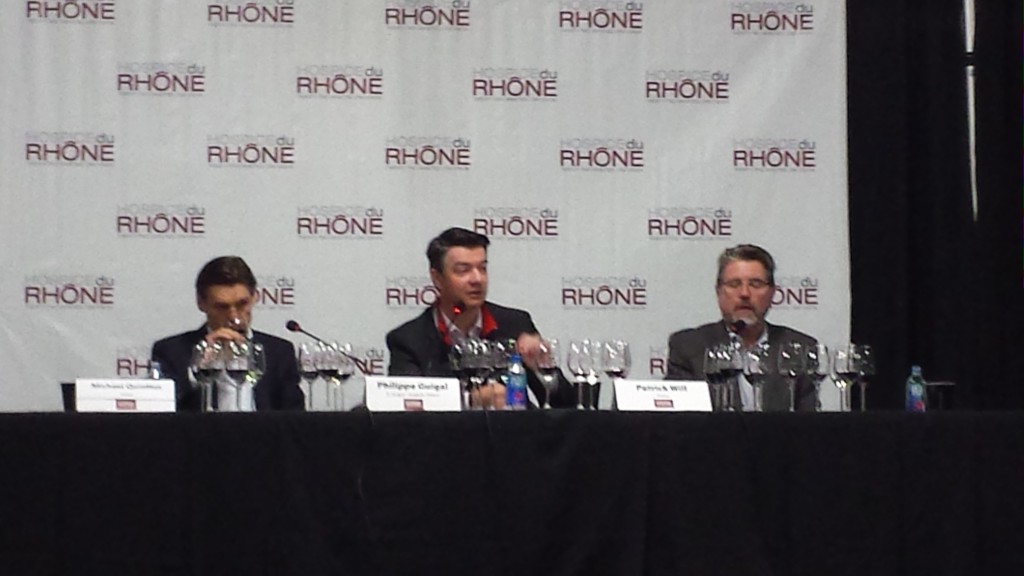 Hospice du Rhône is, per their website, “…a non-profit business league with the specific purpose of improving the business conditions of the grape growers and wine producers of Rhône variety wines and grapes throughout the world. We serve as an international vintners association, providing promotional and educational opportunities.”

Based on California’s Central Coast, HdR holds regular events at Blackberry Farm in Tennessee and last year participated in Découvertes en Vallée du Rhône in France’s Rhone Valley. Every two years, HdR brings it all back home to Paso Robles for a multi-day extravaganza to showcase wines made from Rhône grapes, not just from local wineries but from international ones as well.

I write a lot about Rhône varieties. Other than Zinfandel, the Rhônes are where my palate usually takes me. For a refresher, there are 22 Rhône varieties, called as such due to their origins in France’s Rhône Valley. Most well-known of these for the reds would be Syrah, Grenache and Mourvedre and for the whites Viognier, Roussanne, Marsanne and Grenache Blanc. If you’re interested, you can see the entire list here.

The most recent HdR event in Paso Robles took place April 26th through April 28th at the Paso Robles Event Center. Attendees had options of attending seminars, onsite lunches, grand tastings, offsite dinners, or the onsite farewell dinner, in any combination. Most popular seemed to be the purchase of the weekend pass which gave the pass holder all seminars, both lunches, both grand tastings as well as the farewell dinner. Individual event tickets could also be purchased a la carte.

The schedule of events covered by the weekend pass spanned Friday April 27th and Saturday April 28th. But the fun actually started on Thursday April 26th with a group of seminars held at the nearby Paso Robles Inn. Not included with the weekend pass, these seminars could be purchased individually by those who were looking for a true immersion experience. Called the Focus 22 [after the 22 Rhone grape varieties] Master Classes, each of the three seminars focused on a different region producing Rhone-style wines.

Unfortunately, Karen and I were unable to attend the first two of these Master Classes, but they definitely looked interesting, featuring wineries and regions that I did not have much familiarity with.

The first was called Elevating Arizona: Height Matters, presented by Todd Bostock of Dos Cabezas WineWorks and Maynard Keenan of Caduceus Cellars and the second was The Rhône Rocketeers from Walla Walla, presented by Ali Mayfield of The Walls Vineyard, Billo Naravane of Rasa Vineyards, Steve Robertson of Delmas, Todd Alexander of Force Majeure and Dr. Kevin R. Pogue of VinTerra Consulting. Both classes were moderated by esteemed wine critic Jeb Dunnuck of JebDunnuck.com.

We did make it into town for the third Master Class, and I was definitely glad that we did. I suppose it would be technically incorrect to say that this class was also about a region that produces Rhône-style wines as we got to learn about the Rhone Valley itself: Romancing the Rhônes of Rhône Valley. Presented by Eileen Fabunan of Rhône Valley Wines along with Jeb Dunnuck, we got the opportunity to learn about the Rhône Valley and taste eight wines in total from both the North and South Rhône Valley. This was great for someone like me as I have had limited exposure to Rhônes other than those from California.

Tasting through nine wines in various styles made from a grape that is usually [but not always] a blending grape in California was pretty interesting and gave additional exposure to a wine region that is still little known to many.

The second seminar on Friday was Seminar Two | A 6th Generation Crusade in the Barossa Valley. This seminar was moderated by Chuck Hayward of Vinroads and the presenters were Adrian Hoffmann of Hoffmann Vineyards, Paul Heinecke of Soul Growers, Russell Johnstone of RBJ Vintners, Chris Ringland of North Barossa Vintners Collaboration and Michael Twelftree of Two Hands Winery & Twelftree.

Karen and I used to drink a lot more Australian wine than we do now, so this was especially fun, made more so by the nine wines we tasted all being from one vineyard owned and managed by Adrian Hoffmann, a man as dedicated to growing great wine grapes as the winemakers making the wine.

Not to take anything away from any of the other sessions, Saturday morning’s first seminar was probably the one I was most excited about. Titled Seminar Three | Lost and Found: Old Vine Rhônes Across California, it was presented by Morgan Twain-Peterson, MW of Bedrock Wine Company and Tegan Passalacqua of Turley Wine Cellars and Sandlands. Tegan and Morgan are also two of the founding members of the Historic Vineyard Society, an organization near and dear to my heart and one that I have written about in the past. We got to learn about and taste through 10 wines from nine of these old vineyards. Some of the wines were made by Tegan, some by Morgan, but there were also wines made by Pax Mahle, Angela Osborne, Bruce Neyers and Ian Brand as well as two of my person favorites, Mike Officer of Carlisle and Joel Peterson of Once & Future Wines.

It was time for the final seminar of this year’s Hospice du Rhône event, Seminar Four | The Majesty of Guigal, kind of taking us full circle back to the Rhône valley and learn about this great winery and taste 11 of the wines made there.

Read more about the Paso Robles HdR event in my next article.