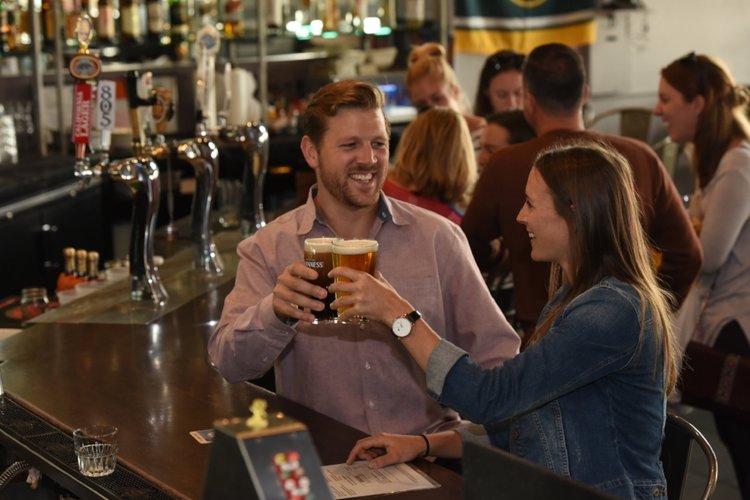 The activity is ongoing and can be done in a single day, or over multiple days. Participants can pick up a free Treasure Map at any of the 20 participating bars and attractions and collect stamps from each of the stops on the map. When they reach eight stamps or move they receive ‘the treasure,’ a golden metal pub glass, which brags, “I Got the Booty!”. 25,000 Treasure Maps will be distributed at over 250 locations throughout San Francisco in 2018. The FWCBD plans to continue this activity indefinitely. While there are no restrictions on what time the stamps can be collected, the verbiage encourages people to come after 7 p.m. to “skip the crowds.”

The 20 participating Fisherman’s Wharf bars and attractions, spanning from PIER 39 to Ghirardelli Square, include:

“Most people don’t realize that Fisherman’s Wharf has over 15 bars within a 15-minute walk of each other,” said Troy Campbell, executive director of the FWCBD. “These bars, combined with our unique evening attractions and late night eats, like In-N-Out Burger and Krispy Kreme, offer a nighttime experience that you can’t find anywhere else in San Francisco.”

The program launch was timed to coincide with the opening of the neighborhood’s first brewery, San Francisco Brewing Co., which opened on May 4, 2018. The brewery is a 12,000-square-foot space with a tap room, automated tap wall, on-site brewery, and full-service restaurant serving elevated pub fare.

The program and campaign launch come on the heels of the recently unveiled Fisherman’s Wharf Retail Strategy report, released by the FWCBD, in which a major goal is to promote the neighborhood’s unique nighttime offerings.

ABOUT THE FISHERMAN’S WHARF COMMUNITY BENEFIT DISTRICT:
The Fisherman’s Wharf Community Benefit District (FWCBD.com), a nonprofit organization, was founded in November of 2005 by the business and property owners of the San Francisco neighborhood. The district is funded through an annual assessment for 15 years from the property owners. The purpose of the Fisherman’s Wharf Community Benefit District is to preserve and enhance its vast San Francisco waterfront landscape and multi-cultural heritage while integrating modern efficiencies to enrich the experience of visitors from both near and far. VisitFishermansWharf.com

Did you miss me? My blogs over the past two weeks were “Vintage Eve” articles as … END_OF_DOCUMENT_TOKEN_TO_BE_REPLACED