When I was offered a sample of Marlee’s Green Tea Whiskey to try I thought: 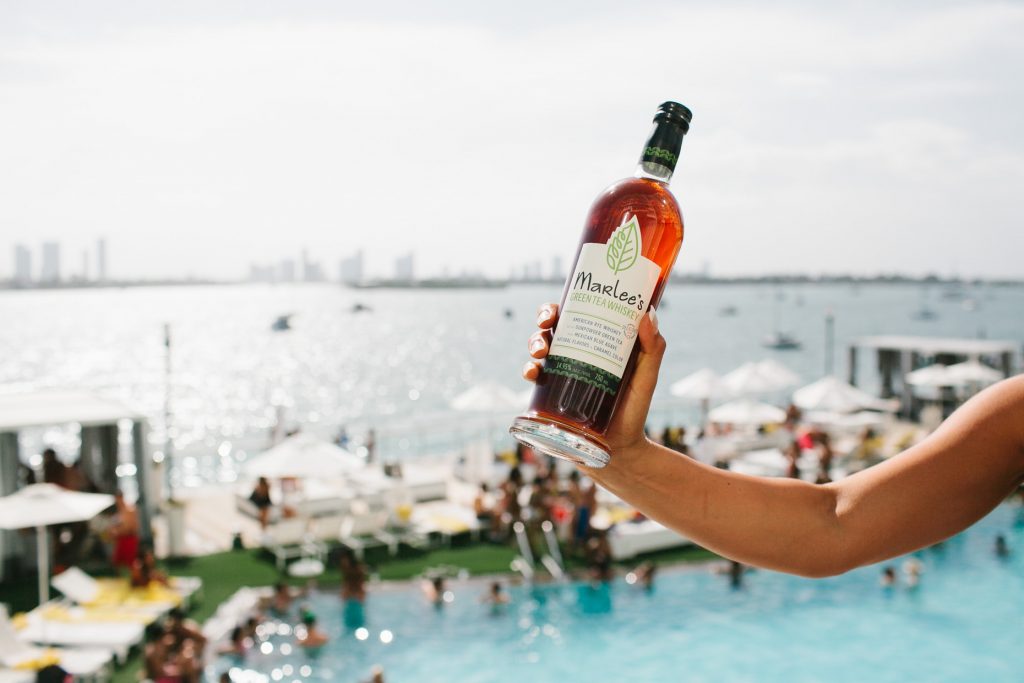 I asked about the caffeine level as I didn’t want to be up all night after sampling, and if Marlee’s can be purchased in California as their based in Florida, I learned, “Marlee’s does contain caffeine but only trace amounts…9.3mg per 100g. For comparison a cup of coffee has 40mg per 100g. Marlee’s is considered to be the perfect drink for day drinking more so than at night–since it is not a nightclub drink, most prefer it for day drinking by the pool or at a barbeque. Marlee’s is not available for purchase in California yet, only Florida. However, it is available for purchase online.”

With only 14.95% ABV (a standard rye whiskey has been distilled at no more than 80% ABV according to Wikipedia and bottled at no less than 40% ABV according to Serious Eats) I thought why not, so I had my first taste in the afternoon, straight, which was kind of cool in itself.

Wanted a wee bit more rye flavor to come through, but then again if this is going to be the “gateway spirit” to get people into rye, it totally works.

Of the ingredients I already had at home I had a choice to try Marlee’s in The Classic (4-6 ounces over ice), Marlee’s Palmer (4 ounces over 2 muddled lemon wedges and ice) or Marlee’s Mule (4 ounces with 2 ounces ginger bear and the juice of one lime). I opted for the Palmer.

Aroma: Same as the above mentioned aromas, with the addition of lemonade and a fruity iced tea.

Flavor: A lot more pleasant than a sweet Arnold Palmer (iced tea and lemonade). Definitely a grown up drink as, when I compare it to the non-alcoholic version I do taste the kick of the rye. Well done and want to try in the other cocktail recipes now too.

Press Release (This gives ALL of the details)

MARLEE’S GREEN TEA WHISKEY: “ALL THE GOODNESS OF GREEN TEA, AND MUCH MORE FUN”

NEW YORK – Turning over a new leaf on flavored whiskey, Marlee’s Green Tea Whiskey is taking it back to the colonial days with a blend of ingredients that are a natural fit. Crafted in the whiskey capital of the world, Bardstown, Kentucky, Marlee’s Green Tea Whiskey does what your great, great grandmother likely did: mix up some whiskey and tea. Marlee’s takes a thoroughly modern slant on an old tradition by expertly blending American rye whiskey, with Chinese gunpowder green tea and a touch of organic Mexican blue agave resulting in a well-balanced, ready-to-drink whiskey beverage with an intriguing flavor profile that keeps it simple.

Jared Berlin, creator of Marlee’s Green Tea Whiskey, knew that tea and whiskey was a common coupling dating back to the 1800’s and wanted to create a premium ingredient product that would appeal to the modern consumer.

“When properly blended, whiskey and tea together create a stunningly refreshing drink that retains the integrity of both the tea and whiskey,” said Berlin. “I set out to develop a product unique from anything else currently in the market – using only amazing ingredients in the right balance – to celebrate this fantastic combination.”

Green Tea and whiskey are still ever present in Asian nightlife and culture. The Green tea is unfermented, which allows the natural enzymes to survive, bursting with antioxidants and natural energy, resulting in a whiskey with all the benefits of a green tea – and much more fun! While still an alcoholic beverage, and thus should be consumed in moderation, it contains 140.8 mg of polyphenols per 8 ounce serving, more than most cups of green tea! Polyphenols are the central compound in green tea that delivers much of its antioxidant benefit.

The process behind creating Marlee’s Green is just as unique as the drink itself. It begins with its proprietary blend of green tea, a special formulation created by tea sommeliers uniquely for Marlee’s Green, sourced from select farms in China. The tea is then brewed and blended with American rye whiskey and a touch of agave, which not only provides sweetness and fullness to the flavor of the whiskey, but also makes Marlee’s Green a low calorie alternative to other flavored whiskeys. The mixture is then filtered to remove the larger particles that form when working with all natural ingredients. It is then bottled and labeled in Bardstown– ready to be opened, poured and enjoyed.

Marlee’s keeps it simple, using only a handful of natural ingredients, and it is recommended that you drink it the same way – simply. Just pour it over ice, or add a touch of lemon, muddled mint sprig or a splash of ginger beer. If you want some added inspiration find some delicious recipes online. Marlee’s Green makes cocktailing simple, fun and delicious.