By the time this article runs Valentino Santa Monica will have shuttered after over 40 years in the same location. The cellar, a Wine Spectator Award winner for many decades, will have been completely depleted via sales and/or being moved to a new restaurant in Newport Beach. The longtime owner, Piero Selvaggio, will have moved out too, soon to be found in Newport Beach with his wine and new restaurant, Louie’s by the Bay. (Read more about the move here in this August 2018 article in the LA Times.) 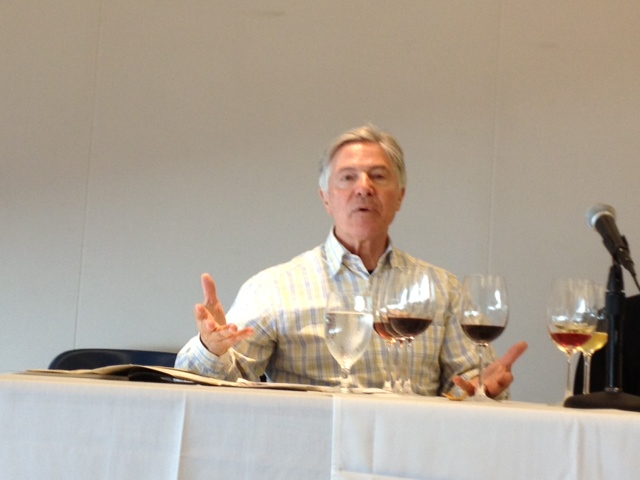 Piero lecturing at the Skirball

While people knew the restaurant for the wine, cuisine, location, Piero and his staff – I knew it for at least two completely different things. Over the years I was able to attend at least three classes that Piero lent his expertise to and enjoyed a few special occasion press dinners as well. Every one left its mark on me.

The most recent class I attended with Piero was a presentation by Planeta Winery focusing on the Nero d’Avola grape that is cultivated in Sicily. Piero shared his own experience growing up in Sicily before coming to the states and entering the restaurant business. After the class I was lucky enough to sit beside him for lunch. When the waiter brought over a plain green salad with nothing but a yummy dressing I took to the cheese and charcuterie that had also been served and “dressed up” my salad a bit more. Piero, watching me a bit, asked for the tray of goodies so he could do the same. I was tickled.

A few years earlier I had attended a lecture via Tasting Panel Magazine where Piero was part of a panel discussion and presentation at the Skirball on the wines of Calabria. Once again I was amazed by the amount of knowledge this restaurateur had under his belt and vowed to never underestimate the amount of knowledge, and sweat, that goes into running a restaurant for so many years.

The very last meeting I attended where Piero hosted was at Valentino and discussed the sticky wicket of the how and why of corkage policies. As I listened to somms and restaurant owners lament the demise of their business due to corkage policies that were demanded by customers, I was charmed by Piero who never once criticized a guest. A real gentleman.

There were also a few press dinners I attended courtesy of Piero. We were “guests of the Briziarelli estate” for the multi-course dinner, which was fabulous. LOTS of photos in this link. I remember a slight lull in the evening and I was able to get Piero to take a few minutes to show me his famed wine cellar. Hall after hall, room after room, up a staircase to a larger room, and finally opening up into the private cellar dining room. I had literally died and gone to wine writer heaven that night.

Another dinner heralded in the latest Brunello di Montalcino 2010 vintage, again in a multi course menu, only to be interrupted…by the blare of a horn? It was famous Italian butcher Dario Cecchini from Panzano, Chianti! And why Valentino for this special dinner? “Valentino was ONE of only 26 restaurants to toast the Brunello 2010 as only 26 were awarded the Leccio d’Oro prize; the restaurant was also one of the first to receive this prestigious award in 1995 – and the first outside of Italy.” Part one on this story is linked above, this is the link for Part two.

The most memorable dinner for me had to be the Prosciutto di Parma event. A group of press were invited into that private cellar dining room, after appetizers on the second story patio and then after a demonstration and lesson with Francesco Lupo we sat and enjoyed dish after dish created by Chef Nico Chessa. My mouth waters to this day when I reminisce about that dinner.

Okay, only now, after having written all this out, I can say goodbye to Valentino and all that Piero gave to us. I will be forever grateful for his gracious press invitations and the wealth of education I gained from it all. Can you say the same about any restaurateur you have known?

What a fun book! In the book Dragonvine by Steve Laine we begin by going to … END_OF_DOCUMENT_TOKEN_TO_BE_REPLACED