Now celebrating its eighth year, Art Beyond the Glass VIII (ABTG) took place on Sunday, June 23, 2019 at Los Globos in Silver Lake. L.A.’s premier cocktail culture festival featured more than 100 top bartenders making cocktails and showcasing their artistry, from painting and sculpture to photography, live music and more, all while raising funds for Beautify Earth. Ria Soler and Josh Gelfand hosted the event. Los Globos was graciously donated to ABTG for the third consecutive year. Opened as L.A.’s first American Legion hall in the 1930s, Los Globos is a massive two-story venue with multiple rooms and state-of-the-art sound and lighting. 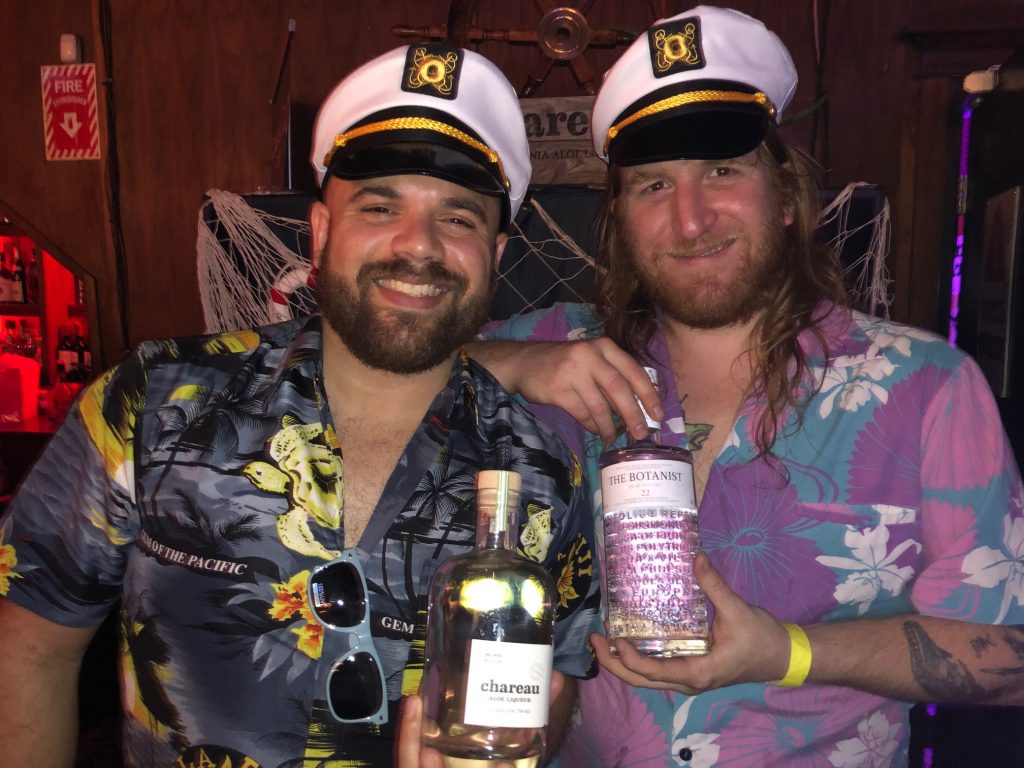 Yea, so this (nine photo grids) happened again. Such a fun event where we get to sample so many different spirits, are entertained by different themes at each bartender station, artists were painting, dj playing music and live music – all spread out through three exciting floors.

We had a lot of fun, and discovered a lot of great cocktails and spirits. Of note for us was Pomp & Whimsy Gin Liqueur in cocktails made by a crew in Alice in Wonderland costumes, bartenders wearing gas masks served up drinks made with Plymouth Gin, coffee liqueur served over rolled soy vanilla ice cream in the circus area, sailors serving up The Botanist gin, Jack Daniels in BRO-Tein Shakes in a cross-fit themed booth, 1856 whisky in a ball-park booth, Hendricks Gin in served up with some of the characters from Shakespeare’s Midsummer Night’s Dream (video), Ford’s Gin served up in an ice glass by more sailors, Redemption Rye in a campground for the “Lowboy Scouts of Echo Park Troop 1540” had a “survival remedy”, bartenders danced around a Fernet Branca ice sculpture (video), Aviation Gin cocktails by several bartenders dressed as Deadpool…

Lawrence Moore, of Lawrence Moore & Associates (Public Relations, Marketing Strategy and Social Media agency) said that more bartending teams dressed in themes than in any previous year – and this definitely added to the exceptional event for all.

Harry Chin – Here’s looking at you

This year the Jack Daniel’s Performance Stage featured Dream Machines, The Cauterizers, a return session by the dynamic duo of musician Brandon McCulloch and tap dancer Lee Howard. There were also DJ sets thanks to sponsor Azunia Tequila, who also donated all of the recyclable paper goods and non-plastic straws at this year’s event.

As always, Art Beyond the Glass VIII is being produced with the participation and support of the USBG Southern California Chapter.

About Art Beyond the Glass (ABTG)

This annual event showcases the artistic pursuits of bartenders outside of their bars. At ABTG, everything from the cocktails to the art and music is created and performed by bartenders. Art Beyond the Glass has also grown into a national event, and ABTG VIII is welcomed participants from across the country: Julian Cox (Tartine Manufactory) and co-host Josh Gelfand from the Bay Area; Brynn Blackstone (Raised by Wolves, San Diego), and Chris Barrett & Colby Poulin (A Clockwork Pour) from Oklahoma City, which is hosting its fourth ABTG later this year. Proceeds from every ABTG event are donated to a cultural nonprofit organization. Since its inception in November 2011, ABTG has donated over $171,000 to nonprofits across the country and following ABTG VIII, the fundraising total will potentially top $200,000. “We’ve had such an amazing response from the whole bar community this year. Everyone has been working so hard to make this the biggest Art Beyond the Glass yet,” says Clare Ward (Hippo), Head of Production.

Art Beyond the Glass was co-founded in 2011 by Courvoisier National Brand Ambassador, Zahra Bates and Daniel Djang, Founder of the cocktail and spirits blog, Thirsty in LA, and Content Manager at Discover Los Angeles. “We are so grateful to the extraordinary family of L.A. bartenders and our wonderful sponsors that have donated their time, talent and product on behalf of these vital nonprofits. From saving an arts facility from closing to restoring a historic mural and contributing to the construction of a public radio station and community gathering place, Art Beyond the Glass will continue to make a positive and lasting impact on L.A.’s cultural legacy,” says Djang.

Once upon a time there was a street dubbed “Stinkin’ Lincoln,” named after a run down and dreary street on the west side of Los Angeles. That street is Lincoln Blvd. Evan Meyer, a local Santa Monica resident decided to take action and coordinate murals on dozens of walls on this street in Santa Monica and Venice. Others followed suit around the country, labeling their own “Beautify” projects after their street, town, or city. And there the movement was born – The team formed a 501(c)3 non-profit and became Beautify Earth. It all started right here in our hometown of lovely Santa Monica. Learn more at www.BeautifyEarth.org.

Haven’t done a “round-up” article in a long time. That’s where I ask pals on … END_OF_DOCUMENT_TOKEN_TO_BE_REPLACED