I think I need to finally admit something…

Back when I first started developing my appreciation of Zin, there were the three Rs of Zinfandel – Rosenblum, Ridge and Ravenswood.

More recently, although still about 20 years ago, my own tastes elevated Turley and Carlisle to the top spots. Bedrock, the relative newcomer [first vintage was 2007] was added to round out this trinity a decade or so ago. 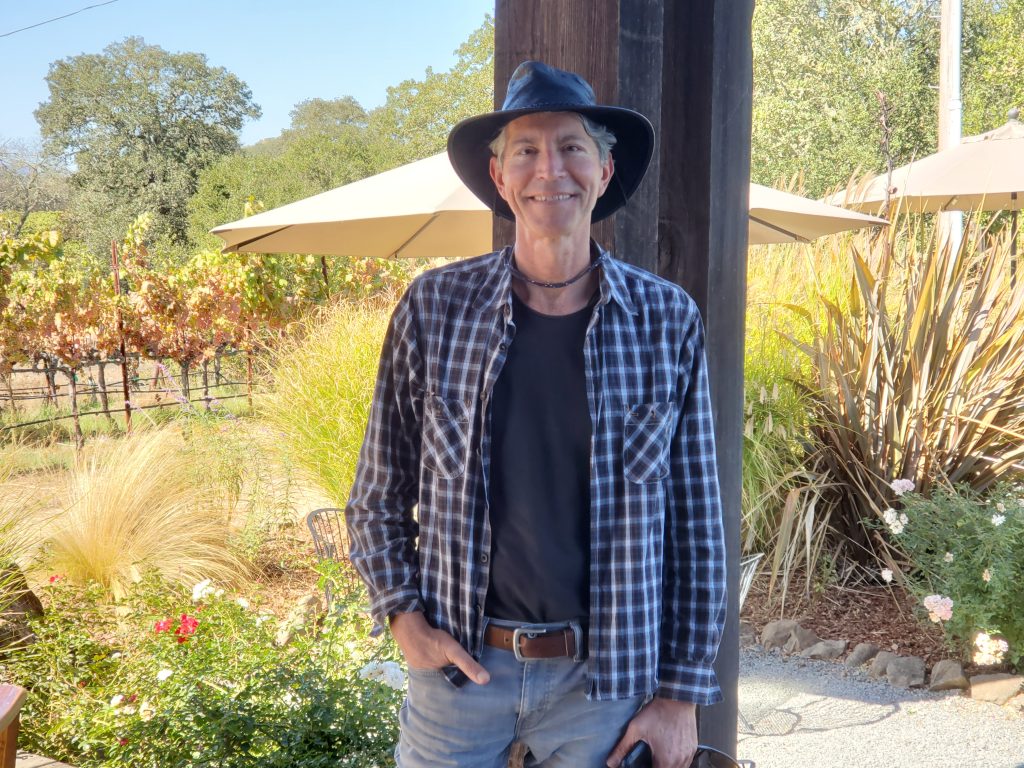 This is not to say that there aren’t other great Zinfandel producers out there. But the abovementioned three always seem to rise just enough above the others to stay in that top spot of Zins that one cannot do without.

But at a recent visit by Karen and me to Mazzocco Sonoma in the Dry Creek Valley, it dawned on me. We’ve visited this winery several times and have never failed to be totally blown away by the quality, especially the famous Zinfandels. This properly socially distanced visit with winemaker Antoine Favero was no exception.

Mazzocco is doing all the right things with their tastings, of course: reservation only, outdoors, tables far apart, masks worn except when seated at tasting table [all subject to change as protocols change, of course].

We had pulled Antoine away from harvest duties, so as we awaited his arrival we started out with a taste of the Kenneth Carl Brut [named after winery co-owner Ken Wilson] followed by the 2018 Chardonnay Reserve Stuhlmuller, Alexander Valley which had just won Gold at the 2020 Sonoma County Harvest Fair. [You’ll note a lot of Gold and above winners at Mazzocco, more than just about any other winery that I’ve encountered and from fairly local and extremely legitimate events where the judges know of what they speak – and taste!]

Antoine’s arrival prompted air hugs, followed by tasting through some of the wines he suggested we try, along with conversation about the crazy year that we had all experienced.

Now Antoine makes a lot of wines at Mazzocco, mostly Zinfandels, far too many to taste all of them, so we put ourselves in Antoine’s hands and off we went.

But, put on the brakes just for a second. Before trying the Zins, we wanted to try the 2018 Grenache Chemise, Dry Creek Valley. Made in a totally different style from the Zinfandels, this really emphasized the softer Grenache fruit. Of course, multiple Golds for this beauty.

But Antoine knew we were there for Zinfandel, so he led us through a tasting of some amazing ones:

2018 Serracino Reserve – Dry Creek Valley [Wonderful aromatics of baking spices, blackberry, and wisteria lead to a harmonious flavor medley of chocolate truffle, nougat, and vanilla bean with hints of gooseberry in the mouth. The tannins are velvety, ending with a smidgen of French oak, a hint of dusty rose, and a dusting of cacao.]

2018 Warm Springs Ranch – Dry Creek Valley [Captivating aromatics of violets, wild cherry, and potpourri meld seamlessly in the nose followed by a fleshy palate of boysenberry and hazelnut framed by luxurious and inviting tannins. This is a well-balanced Zinfandel with round plush tannins and a long caressing finish, hinting of exotic spices, Madagascar vanilla with a smidgen of coffee bean.]

2018 Maple Reserve – Dry Creek Valley [Inviting aromas of blueberry and rose petals fuse with cacao-scented oak and hints of toffee, showcasing the intense flavors to follow. An opulent entry opens the way to wild cherry marmalade, blackberry, and spice with a smidgen of vanilla bean and traces of hazelnut with cardamom and spice residing in the background. As the layers contribute to the complexity, so do the round supple tannins and integrated oak.]

There are a lot more, but we had to draw the line at some point.

I’ve never been good with tasting notes and I am not going to try to BS my way through with some here. The notes above were provided by Antoine. Suffice it to say these were some of the hardest wines that I’ve ever had to pour out from my glass in order to move on to the next one, and in some cases the only pouring was into my open mouth. Just outstanding.

A tasting with Antoine wouldn’t be complete without a taste of one of the Three Amigos wines, ultra-premium versions of the best the winery has to offer, each one named after a key person with the winery, Kenneth Carl, Juan Rodriguez and Antoine Phillippe. We tasted the 2017 Antoine and it was truly amazing, not surprisingly.

As we tasted we talked about the changes they had to make during the pandemic, both within their now eleven-winery organization as well as with tasting experiences. Of course, problems were exacerbated due to the fires, with many vineyards experiencing fire and/or smoke damage.

Smoke taint can be the kiss of death to a wine. Its impact can be a matter of degree, but no winery wants to put out a product that shows even a hint of it. The amount of samples from the entire area being submitted to labs for testing create a huge backlog. Antoine needed to run some preliminary micro-fermentations on his own to get a handle on things before getting the actual lab results to confirm his findings. He let us taste one result from a vineyard that he declared a total loss for 2020.

This was actually quite interesting. The sample did not taste bad. Antoine compared it to mezcal; we also noted distinct BBQ notes. It just didn’t taste like wine and it was definitely an indicator of a vintage lost for that particular vineyard. And Antoine saved this for the end for a good reason, as after tasting this our palates definitely needed a rest.

Now Antoine had to get back to finishing harvest and we needed to make our purchases and be on our way. As we walked back to our car [wearing masks, of course], I thought – “the Zinfandel trinity has officially become a quaternity”. Long past due, for sure.

Michael Perlis has been pursuing his passion for wine for more than 30 years. He has had the good fortune of having numerous mentors to show him the way, as well as a wonderful wife who encourages him and shares his interest.

After a couple of decades of learning about wine, attending events, visiting wineries and vineyards, and tasting as much wine as he possibly could, he had the amazing luck to meet Eve Bushman. Now, as Contributing Editor for Eve’s Wine 101, he does his best to bring as much information as possible about wine to Eve’s Wine 101 faithful readers. Michael is also President of MCP Financial, which provides outsourced controller services. Michael can be contacted at michaelthezinfan@aol.com or mcpfinancial@aol.com.