If you don’t know Compass Box scotch whisky you are really missing out. Let’s pretend that you do: Forget for a minute that they make several blends as well as single malts, forget that their creamiest (in my humble opinion) isn’t made from malted barley but from grain whisky, forget that their whisky makes a damn fine cocktail, and maybe even forget that their labels are incredibly colorful as well as informative and provide complete transparency. But even if you can forget the unforgettable of all of the above, there is no way you will be able to forget how damn fine, and very different from each other, that these whiskies are. 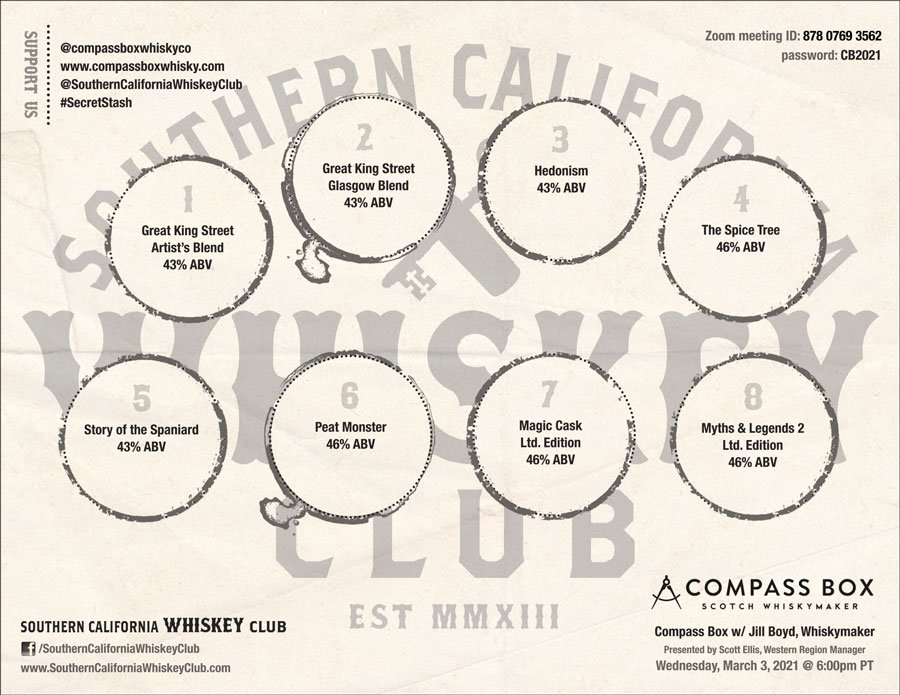 Hope I have served to whet your whistle! Now, moving on, this was the sold-out invitation that the members of the Southern California Whiskey Club received:

We are delighted to welcome Jill Boyd, Whiskymaker at Compass Box, for a virtual Masterclass. Since joining the team in January 2017, Jill has become a key whisky maker at Compass Box and will be joining us all the way from the UK for this special event. Jill hails from the North-East of Scotland, and her job includes working on the brand’s blends, purchasing new-make spirit to be filled into their own casks, as well as choosing and buying matured stocks. Apart from making whiskies, she is also a brand ambassador for Compass Box. She is the perfect person to be presenting the whiskies that we will be trying, as she has probably created and put them together with John Glaser.​​

When we got into the tasting Boyd, at 3am her time, was animated and charming. To the point that I made very few notes of my own, only to find myself wildly animated as well as I nodded, clapped, gave the thumbs up while finishing every single drop of the list below. The notes I have added are mostly Boyd’s.

The line-up, in the order in which we tasted:

Hedonism: This was a whisky I had tasted at the Universal Whisky Experience, aka the Nth, a few years back. I loved it so much I gifted Eddie a bottle later that year. There is vanilla, caramel, cream, and it’s 100% grain whisky. Boyd said it’s the grain whisky that accounts for the creaminess. She also said it tastes like Spring to her. This brought up a discussion about how many distilleries in Scotland are working with grain and the collective answer was seven.

Great King Street Artist’s Blend: We found a creamy nose with no burn, and a more traditional malt whisky finish though it was only 55% malt and 45% grain. Boyd said that the use of a sherry cask acts like an amplifier to the blend and allowed for notes like waxy apple, greens, woodiness, blossoms…fruity and juicy. And a literal steal for $35.

Myths and Legends: This was my favorite whisky in the tasting, after Hedonism. A single malt and not a blend. Creamy, vanilla and benefitting from charred barrels. I think this one goes for $170.

The Spice Tree: A 100% blended malt whisky. Boyd noted ginger, clove, Christmas spice, cinnamon and star anise. She also suggested making it in an Old Fashioned. Now that I want to try.

Magic Cask Ltd. Edition​: Reminded me of warm waffles with a lot of maple syrup, also noted some dried fruit. Boyd commented that the vanilla notes came from the use of bourbon barrels and that the whisky was “lush”, to which I agreed.

Story of the Spaniard: This is their newest whisky, I had the Spaniard (Not the Story of) at the Nth event as well and recalled liking it very much. Both are made with a Sherry cask. This newer version was sweeter to me, and I think it would be a nice gateway whisky for newbies, an easy sipper.

Great King Street Glasgow Blend: Always serve your peated whiskies at the end of a tasting, and that’s what we did here. This one with some Laphroaig whisky (a whisky known for its great peat) had green notes and was really nice with a little water.

Peat Monster: Made with 35% Laphroaig whisky, as well as some Caol Ila whisky, there was a nice lemon, smoky bacon and green apple according to Boyd. A little water with this one worked for me too.​

Founded by US entrepreneur John Glaser from his kitchen in 2000 as a blending house for the modern era, constantly innovating a range of innovative blended Scotch, blended malt and blended grain whiskies. John is also always pushing for more transparency with the blends, and happily gives you the recipe to all his blends (something that is actually not allowed according to Scotch Whisky Association rules).

A group of friends to gather together to enjoy and talk about whiskey and other spirits:

Who likes sparkling wine? The ultimate wine for celebration, and celebrated as a … END_OF_DOCUMENT_TOKEN_TO_BE_REPLACED