Two bottles of incredibly rare 1889 Tokaji Essencia, Zimmerman Lipot from Hungary’s most renowned wine region Tokaj and from the most famous family to produce it, will be offered in Dreweatts Fine and Rare Wine and Spirits sale on July 8, 2021. The Tokaji Blend is a term used to describe the varietal composition of the revered wines of Tokaj, Hungary and the area and vineyard, which have an impassioned history, centred around the first winemakers of the region, the Jewish Zimmerman family. 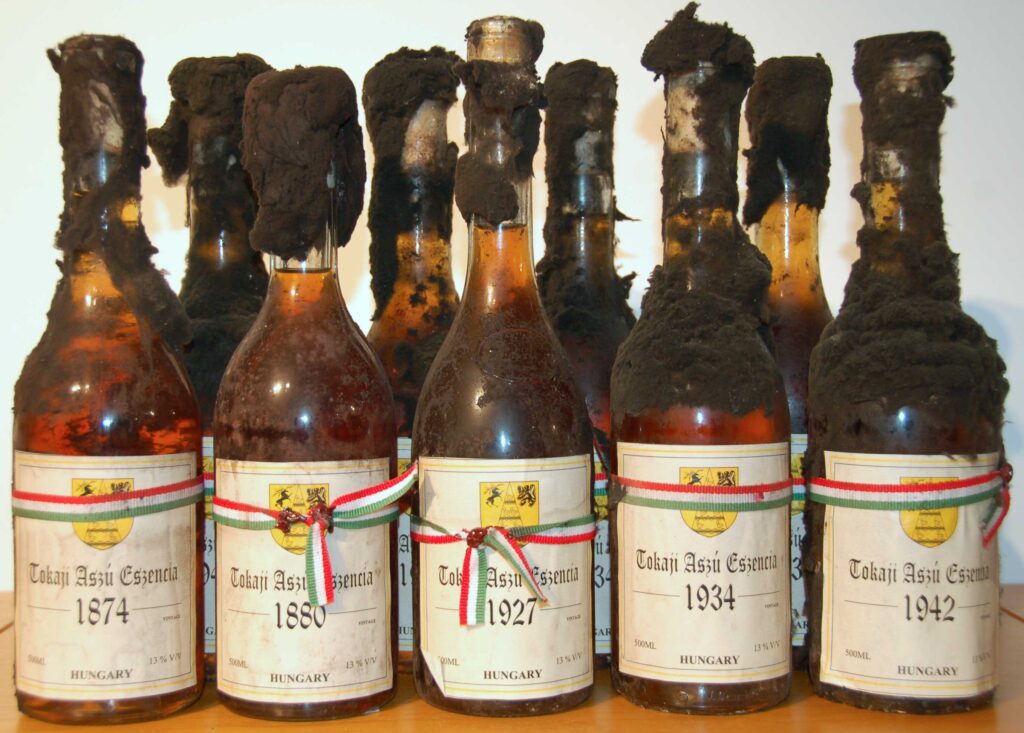 This photo is NOT of the wines in this auction, it is just to give you an idea and photo credit goes to FinestAndRarest.com

The Zimmermann family were wealthy Jewish landowners, creating the region’s legendary sweet wine from first-growth vineyards from the 19thcentury until World War II. They had numerous vineyards across Tokaj and approximately 60 cellars and lived in an elegant townhouse in Mád, as well as having a second residence in Abaújszántó. Highly successful, their wines were prized, receiving several gold medals at competitions in Berlin in 1892 and Paris in 1896. The company continued to flourish with offices in Budapest, Berlin, Katowice, London and New York, until the occupation of Hungary by Germany in 1944. It was then under General Dome Sztojay and SS Colonel Adolf Eichmann that 437,402 Hungarian Jews were deported to Auschwitz, amongst them the Zimmerman family, in an attempt to eradicate the last intact Jewish community in occupied Europe. The vineyards were left to fall into disrepair and eventually taken over by the communist state when Hungary fell to the Red Army in 1945 and communism ruled until the 1980s.

It was in 1990 following the fall of communism, that the first foreign investor in the region purchased the land and vineyards. British wine writer Hugh Johnson acquired it from more than 60 individuals, who had bought it when it was privatized some years before. In doing so, he founded the winery known as Royal Tokaji, which has established itself as one of Hungary’s most foremost wineries. The region of Tokaj was also designated a world heritage site in 2002.

In June 2016, six descendants of the Zimmerman family’s holocaust survivors unveiled two plaques at the front of the headquarters of the Royal Tokaji wineries in Hungary, recognizing the family’s unequivocal link to the history of winemaking in the region and in tribute to the Jewish community there that lost their lives.

The first plaque reads: This was the home of Miklos and Blanka Zimmermann and their two children and the second notes the former home of Lajos and Margit Zimmerman. The signs also go on to note the Zimmerman family’s long history of involvement in: the cultivation, production and marketing of Tokaji wines, since the early 1800s.

The two bottles of 1889 Tokaji Essencia, Zimmerman Lipot being offered for sale at Dreweatts are therefore exceptionally rare and are almost a slice of history. Mark Roberston, Head of the Wine department at Dreweatts says, “One can almost distil the political history of Europe in the 19th and 20th century through Tokaji” and regarding the wine itself he comments; “The free run juice of the aszu grapes can take 6 or 7 years to ferment fully to a maximum 3-7%. This supernatural concentration of sweetness is beautifully married with an unusual level of acidity creating a wine that can age effortlessly across the centuries. Traditionally served on a crystal spoon, what an experience awaits”.

Michael Broadbent, MW describes it as follows, “Several consistent notes. Most memorably, on my first visit to Budapest in 1972, with Josef Dömöter, Head of the Hungarian Wine Trust and Fred May, the UK Monimpex importer. Neither had ever tasted an old Eszencia before. I opened it in Herr Dömöter’s office, to great wonder and satisfaction, and took the remaining half the following morning to Tokaj, where, in Tarcal, I had lunch with the technical Head of the Research Institute for Viticulture. He didn’t like it! Briefly: a deep, warm amber; glorious fragrance, rich, chocolatey, spicy; sweet of course, plump, concentrated taste of singed sultanas, excellent acidity. Last tasted in Leiden Nov 1982 *****”

Mark Robertson concludes, “These are important bottles and I hope they are enjoyed with a chink of the glass to the man and his family who made them”. They carry an estimate of £500-£1,000 per 500 ml bottle and will be sold in two separate lots.