LOS ANGELES –  The Legacy Cellar Foundation’s inaugural event, “A Goliath 60th Celebration,” honored St. Jude Children’s Research Hospital®’s 60th anniversary and raised more than $3 million on Saturday, May 14. The centerpiece of the evening was a massive 27-liter bottle of 2003 Sine Qua Non The Inaugural Syrah, a priceless 100-point wine and the only bottle of its kind in the world, which raised an unprecedented $1.8 million and set a record donation for a single bottle of wine. 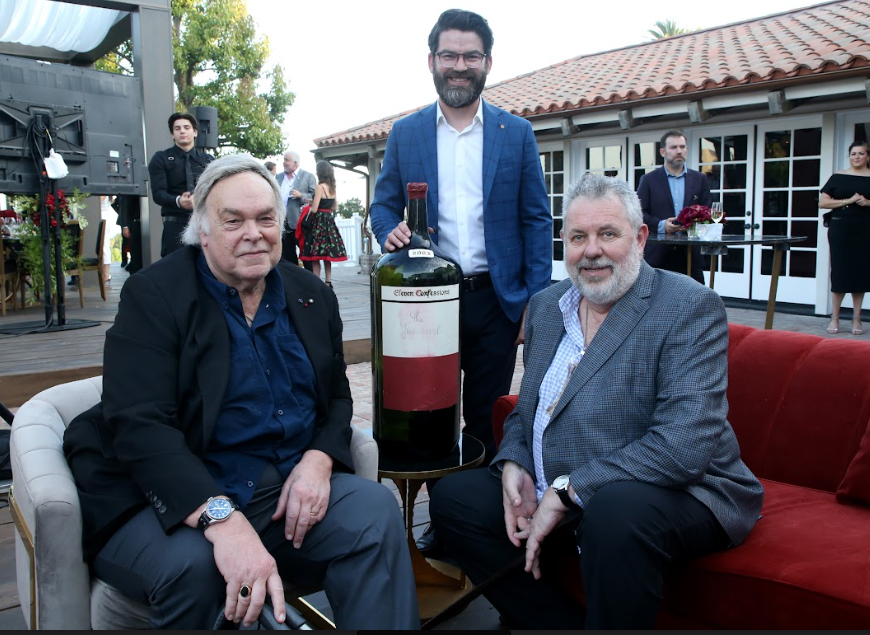 The intimate, unprecedented affair was held at a private residence in Bel Air, California with 60 St. Jude supporters donating $30,000 each to experience the extraordinarily rare Syrah, which was generously donated by Robert M. Parker, Jr., widely considered the world’s most influential wine critic. The unicorn bottle of wine was paired with a dinner prepared by James Beard award winning chef, Nancy Silverton. The Legacy Cellar Foundation made it possible to donate 100% of the proceeds to St. Jude. The “Goliath” 27-liter bottle was equivalent to 36 standard bottles of wine and weighed an estimated 134 pounds.

“Through the generosity of Robert M. Parker, Jr., donors, sponsors and participating chefs, we are thrilled to have raised more than $3 million at our inaugural event for St. Jude Children’s Research Hospital,” said Garth Hodgdon, director of The Legacy Cellar Foundation. “We knew the 27-liter bottle of 2003 Sine Qua Non The Inaugural Syrah was a staggering wine but transforming it into a record-breaking $1.8 million life-saving gift for children has made it truly priceless.”

Nearly 20 years ago, Robert bestowed The Inaugural Syrah wine a rare 100-point rating and commissioned this one-of-a-kind bottle from famed winemaker, Manfred Krankl, for his personal collection. To date, it was the one and only time Manfred bottled a wine of that tremendous size, which required a custom cork and corking. The dinner drew on the rich history between Manfred and Silverton, who were partners in La Brea Bakery and their James Beard Award-winning restaurant, Campanile. After the sale of La Brea in 2001, Manfred dedicated his full efforts to Sine Qua Non. It was that same year that this wine was bottled, and it was the first wine fashioned entirely from the Eleven Confessions Vineyard. This was Parker’s first public event since retiring from The Wine Advocate in 2019.

Jason Thomas Gordon and his sister, Dionne Kirschner, the grandchildren of Danny Thomas and children of Terre Thomas, were joined by Dionne’s husband, Trevor Kirschner; Richard C. Shadyac Jr., president and CEO of ALSAC, the fundraising organization for St. Jude Children’s Research Hospital; his daughter, Coury Shadyac, the organization’s senior vice president, territories; and Noah McMahon of Anonymous, LLC. Robert was joined by his wife, Patricia Parker; and Manfred by his wife, Elaine Krankl. Silverton was joined by Steve Samson, chef and owner of Rossoblu, in preparing the phenomenal dinner.  Following the dinner, iconic 80s rockstar Rick Springfield performed some of the greatest hits of his illustrious career.

This was the first of many events planned for Legacy Cellar Foundation, which, through the generous support of a private benefactor, ensures 100% of wine donations go directly to the nonprofit of the donor’s choice. The organization’s mission is to convert wine collections into charitable donations – bringing a previously untapped source of funding to the philanthropic sector, enabling greater positive impact and ensuring curated wine collections will be enjoyed by future enthusiasts.

The evening honored the legacy of Danny Thomas and his family, which has carried on his dream. His vision for the organization was as rare today as it was then: a research hospital where children with catastrophic diseases receive care and treatment regardless of their ability to pay.

During Richard’s opening remarks, he shared that St. Jude was the first hospital in the U.S. to receive patients from Ukraine. Just hours after Russia invaded Ukraine, St. Jude Global, in partnership with ALSAC, the fundraising and awareness organization for St. Jude, began working through its global network of more than 182 institutions in 61 countries, including long-developed partnerships in Ukraine and Poland, to move children with cancer across Ukraine to safety and continued care.

More information about St. Jude Children’s Research Hospital can be found at www.stjude.org.

About The Legacy Cellar Foundation:

The Legacy Cellar Foundation is a 501c3 donor-advised fund that collects, authenticates and liquidates wine collections for charitable purposes. The organization’s mission is to convert wine collections into charitable donations – bringing a previously untapped source of funding to the philanthropic sector, enabling greater positive impact and ensuring curated wine collections will be enjoyed by future enthusiasts. More information about The Legacy Cellar Foundation and upcoming events can be found on the website at www.legacycellar.org  and Instagram.