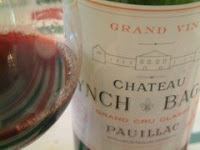 It’s a wine holiday! Since 2000, a special Saturday night in February has been designated Open That Bottle Night. This year, the special day falls on February 28.
A little bit of History about Open That Bottle Night: Most winos have a bottle of wine sitting around that is too fancy or expensive to open on just any old Saturday night. After years of saving, the perfect moment never seemed to come and the bottle is just collecting dust in your ‘under the sink wine cellar.’
That’s why two Wall Street Journal wine reporters* created Open That Bottle Night eight years ago. Open That Bottle Night becomes the reason to pop open a bottle that, for one reason or another, you just have not gotten around to drinking. So dust off that gem you’ve been saving and Open That Bottle!
*Dorothy J. Gaiter and John Brecher of WSJ
So here’s the dilemma…what to open? And…make it a party or a party for two?
I e-mailed a wine guru to suggest he make an evening out of it. No response – so I guess he’s not sharing.
Today’s my sister-in-law’s birthday…do I ask her to hold off a week before she opens that second bottle of her new favorite: Duckhorn Migration 2006 Pinot Noir?
Do I take a nice ready-to-drink bottle from my mini storage, formerly the garbage-compactor space in my kitchen, or from my sub-zero sized cellar in the garage? (The second option means I have to TELL MY HUSBAND.)
Can I even convince my husband?
I have a week to make decision…but here are some choices:
Joseph Phelps Insignia 2001
Silver Oaks 2001
Pride Mountain Merlot 2002
Phifer Pavitt Cabernet Sauvignon 2003
Lynch Bages Bordeaux 2000, 2003
Banfi Brunello 1999
Poggio Antico Brunello 1997
Costello Banfi Brunello 1997
Chateau Ducro Bordeaux 2000
Marcarini Barolo 2000
I’m stopping here as instead of OTBN it’s going to become OTB(EVERY SINGLE)N! I await your comments…with thirsty palate, empty wine glass and an-ti-ci-pation.