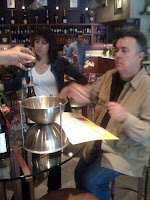 While drinking into the night at Valencia Wine Company, as is our habit, I had an epiphany. Well, actually it was just an idea for a column where I could score a wine tasting at the same time. Apparently I have a lot of epiphanies…

Owner Guy Lelarge was talking about some outstanding wines his rep had brought in earlier that day and what he chose from the sampling to have in his shop. I wanted in and Guy agreed that it would be a fun column. But then he also agreed that I should work at his shop one night, with tips going to the Firemen’s Widows and Orphans Fund. The first idea didn’t require me to work, so that’s why I started with it. (Big surprise there?)

So, fast forward if possible, in the other arena sat wine friend and Paso afficionado, Diane G. Diane goes to Paso up to 6 times a year. I can’t think of anything I do 6 times a year, I don’t drink 6 of the same wine a year, don’t save just 6 corks a year, and luckily don’t have 6 hangovers a year. But Diane is one of these nice wine people, the ones that go six times a year to frequent the same B & B and make friends with the same wine people.

And for Ecluse owners, Steve and Pam Lock, having Diane and her husband Jim, visit means two extra sets of hands. “We really don’t help in the vineyard,” Diane said. “We visit, learn about the way things are done and pour for them when we can on event weekends or busy weekends.”

This is why I hate her. Well, maybe just a little healthy jealousy. She is living my life…drinking my wine.

So fast forwarding again, Diane tells me about her trips to Paso and the amazing Zin’s they are producing there. I’ve been to Paso but I don’t have the same passion as Diane…for anything. (Was she a cheerleader…is that it…is that the piece of the puzzle she’s kept from me…the piece that pits her growing energy against my failing one?)

“I always go to new wineries I’ve not been to, as every time I go, there’s at least 1/2 dozen more new ones and I can’t keep up! Diane Babcock, actually living there and having to recommend them to her guests, visits them and tries to keep us in the direction of the ones we like.”

Okay, so how can I get up to speed? Diane arranges a tasting with my Guru Guy and asks me to come by. Filling all of my needs, and hoping to look-good-to/keep-up-with Diane, I agree.

Steve brings out 6 bottles of wine, Guy arrives and the two men shake hands and then sit down to business. Guy brings out a dump bucket to spit into and Steve hands him a portfolio of information on the wine and pricing.

Diane and I are left at the adjacent table, grabbing at bottles to taste to keep up with them. My pen is scratching away, attempting to take notes of their conversation, but the table is wobbling under the pressure and all I can think of is that I’m missing some of the wine.

This is what I can decipher:

Steve has made the 3 hour drive to show his wines to a few local merchants. The only other way to have his wines would be from the tasting room or maybe a high-end restaurant. He is the winemaker and owner of Ecluse, 30 acres, near Summerwood, two miles west of Paso. He started out with 8 acres.

08 Prelude made with Grenache Blanc and Viognier was a lighter, somewhat grassy wine. A good start. Next up was an 05 Syrah with a really nice mouthfeel and good oak. Following that, very quickly, came the Rendition 06 that Robert Parker rated 90. At this point, Guy, doing his best spitting that I’ve ever seen and is limited to this part of his job, commented that it was “lovely”. Diane and I didn’t pour that out, or spit, and at that point decided to no longer follow the men. We were there to drink – not speed date wine.

Then we tried the 06 Cabernet from Lock Vineyard, 05 Ensemble and lastly the Blind Dog. The Dog was a very approachable, drink now, wine that…I wanted to keep. But when Diane told this to Steve he said he had more stops to make. I made a mental note (well, I actually wrote it down) that I would make sure to be a reps last stop next time.

At this point in our sampling the men settled in for a minute, with Guy trying some of the ones he liked a second time. Steve then told us a little more about his techniques.

When will we let you taste?

Guy and Steve set up a date for you to come to Valencia Wine Company on July 11 from 2-5pm. Call the store for details. 661.254.9300 and learn more about Ecluse wines at their website: http://www.eclusewines.com/about.htm