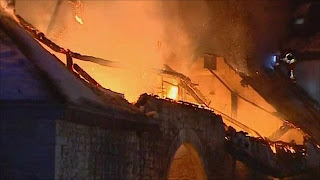 On December 30, 2010 a fire broke out and damaged the Rochefort Monastery in Belgium.  This abbey at St Remy-Rochefort is famous for its Rochefort beer and dates back to the 13th Century.  The abbey has been producing beer since 1595 and is known today for producing one of the strongest brews at 12% alcohol. 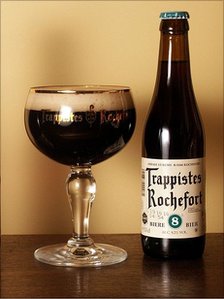 The source of the fire was near a recently installed generator being used to circumvent recent  power drop outs and interruptions at the monastery caused by the recent weather.  The Trappist (Cistercian) monks were dining when fire broke out at the abbey.  All of the monks escaped unharmed. The other good news is that the brewing vats as well as the monks library containing a large collection of very old literature was not damaged.

The abbey has been destroyed on two previous occasions.  Once by the troops of Lorraine in 1650 and again during the French revolution.

Francois Bellot, mayor of Rochefort, said he was confident that it would be possible to resume beer production within a few days.  Rochefort is one of only five breweries where Trappist beer is made by Trappist monks.

In closing, I am thankful that the 70 firefighters were able to minimize the loss of such a historic structure.  I am also thankful that the monks will be able to resume brewing in the near future as this is their only means of supporting themselves and the monastery.  Trappists monasteries try to not rely on donations and make every attempt to be self supportive.  The ancient Benedictine motto describes them in 2 words…ORA & LABORA (work and prayer).