What a treat to tour caves at least at one winery in Paso Robles last week.  Got us out of the rain, AND SNOW, and allowed us to imagine that we were dining at an exclusive candlelit wine dinner or an intimate wedding.  Rows seemed endless, barrels calling out to us with their vintage years and types of oak, the perfect place to start a day of wine tasting.  And our host?  The winemaker at Eberle Winery: Ben Mayo. 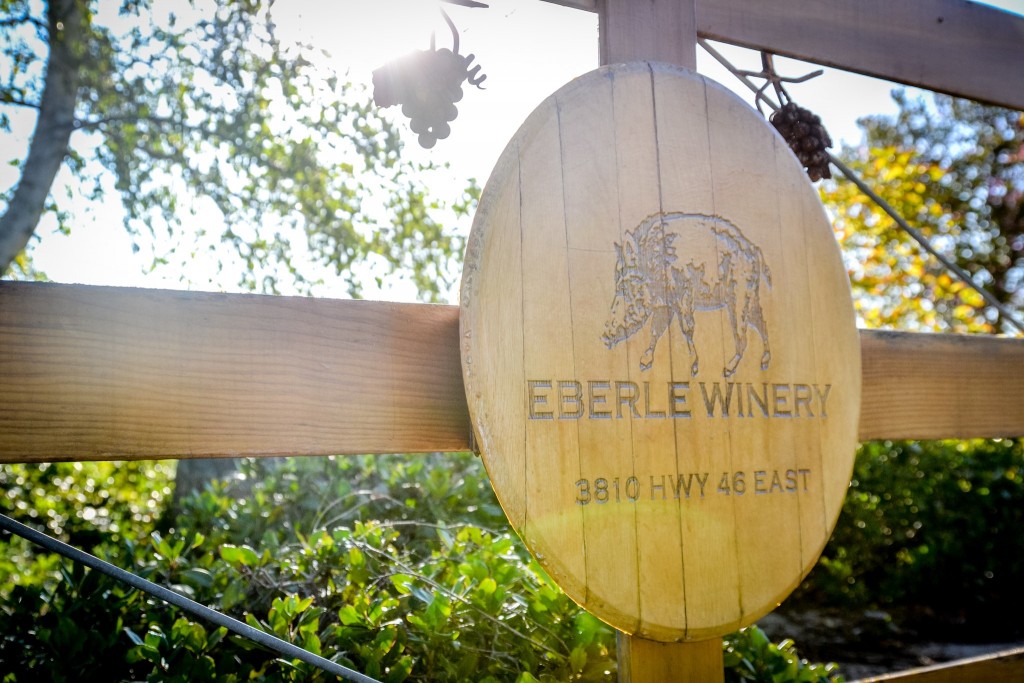 “Here at Eberle we are ‘own-rooted’ as opposed to using root stalk.  We also focus more on quality and less on production.  I look over 19 vineyards – in all directions – amounting to 3 tons per acre,” Ben began. “Then we sample the grapes that we produce ourselves –  not grape selections from farmers, but our own.  It’s very hands-on for the three of us: me, my assistant and our cellar rat.”
As Ben spoke he led us down below the tasting room, first to the winemaking area where some equipment – that is used outside – had to be covered up to protect it from the weather.  Inside we saw the usual suspects: Gleaming stainless steel tanks.
But then he led us a little deeper.  Into the caves they had built to house the bazillions of wine aging in oak barrels.  I wished and wished that he had a wine thief handy for an impromptu barrel tasting, but alas, it was my first winery of the day, and I was too shy to ask!
No matter, after we found our way out of the caves, Ben led us back to the tasting room.  We had about  a dozen, and these are the ones I could recall:
2009 Viognier Mill Road Vineyard
The colors and aromatics from the 2009 vintage are exceptional. A cold, dry winter led to a normal bud-break in March, with bloom and fruit set following shortly
thereafter. During the summer, tight clusters formed with small and even berry sizing. Canopy development was ample, protecting the clusters from sunburn
throughout the summer season. A heat spike in early September brought fruit into the perfect physiological ripeness, readying the clusters for harvest.  The 2009 vintage is the result of a stellar growing and ripening season.These wines are remarkably well-balanced, displaying concentrated fruit, intense flavor profiles and vivid color extraction.  One of the best vintages from the Paso Robles Appellation yet!
Eve: Floral aromas, as well as some grass and lemon, the taste had a nice honey against the acid, nice long finish.
2008 Cotes-du-Robles Blanc (We had 07 too but not the white – nice!)
The 2008 growing season was challenging to say the least. A cool and relatively dry winter led to bud break in mid-March. An unexpected frost in late spring followed by high winds caused “shatter”resulting in smaller berries and lighter yields. Warm temperatures during the summer with cool evenings brought along veraison at the normally expected time frame of mid-July. However, the latter part of September and early October brought cooler than normal conditions, slowing down ripening of the berries, while allowing more hang time on the vines. The 2008 growing season was challenging to say the least, but the result of this vintage are
wines that display well developed flavor profiles with balanced acidity.
Eve: Sweet yet tangy with some acid and a nice finish.
07 Sangiovese
The 2007 growing season while unique, has turned out to bean exceptional vintage for the Paso Robles wine growing region. Below average rain fall in the winter with warmer than normal temps encouraged an early bud break in the spring. Warm days and cool nights throughout summer brought early season varietals in at normal harvest times. However, a drop in temperature in late September delayed harvest for mid to late season varietals, increasing hang time and allowing fruit to come to the perfect flavor maturity. Overall, while crop yields were lighter for 2007, the result was a well-balanced, high quality vintage that displays concentrated fruit, intense flavor profiles and vivid color extraction.
Eve: Nice mushroom aroma and ripe black fruit taste.  My notes are falling away here, palate fatigue so soon?  Say it isn’t so! 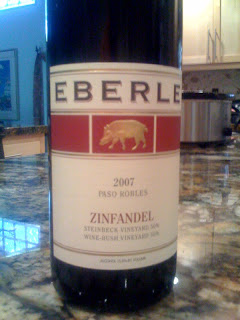 Eve: Very traditional Zin nose and a nice balance.  All in my party agreed it was the best we tasted !

08 Syrah Steinbeck
The 2008 growing season was challenging to say the least. A cool and relatively dry winter led to bud break in mid-March. An unexpected frost in late Spring followed by high winds caused “shatter”resulting in smaller berries and lighter yields. Warm  temperatures during the summer with cool evenings brought along verasion at the normally expected time frame of mid-July. However, the latter part of Fall, brought cooler than normal conditions, slowing down ripening of berries but allowing more hang time on the vines. While 2008 was a challenging year, the resulting vintage displays well developed flavor profiles with adequate tannins and balanced acidity.
Eve: Some grass, gaminess, nice dry finish.
03 Reserve Cabernet Sauvignon
The growing season for 2003 began with a cool and wet spring, but warmed up mid-summer. A heat spell lasted through the months of May and June, which created some set and bloom issues. The remainder of the ripening season held ideal temperatures with warm days and cool nights. Although overall yields from harvest were lower from the smaller fruit clusters produced, quality of the berries was exceptional.
Eve: Exceptional. White pepper, perfect jam qualities and a nice, long, finish.  Ben said that 2010 will also be a good Cabernet year for Eberle as their Cabs, “age beautifully.”  (Full disclosure, I paid for the Zins.)

The KFWE is the destination for wine and food lovers alike, affording … END_OF_DOCUMENT_TOKEN_TO_BE_REPLACED