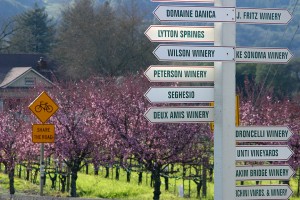 The 2011 San Francisco Chronicle’s Top 100 American Wines report featured 27 Sonoma County wines, significantly more wines than any other region in the report. Sonoma County wineries were prominent among the sparkling wine, chardonnay, pinot noir, zinfandel and cabernet sauvignon categories, a testament to the diversity of the region’s appellations and climates.

In the Wine Spectator’s October 15, 2011 California Pinot Noir issue, the cover story headline proclaims “How Pinot Became Sonoma’s Signature”, a huge coup acknowledging the evolution taking place as vintners and growers learn more about their sites, clones and nuances in winemaking. Senior editor James Laube’s story, entitled “California’s Burgundy” chronicles the wine’s evolution in Sonoma County from the 1980s to the 2009 vintage and highlights 20 Sonoma County producers and 15 great vineyard sites before extolling the virtues of the critically acclaimed 2009 vintage. “In terms of the number of great wines, ’09 is head and shoulders above any other vintage in California Pinot Noir history,” Laube writes.

In another exciting acknowledgement of Sonoma County’s Pinot Noir quality, 2009 Kosta Browne Sonoma Coast Pinot Noir was ranked the number one wine in the Wine Spectator Magazine’s Top 100 Wines of 2011, a huge accomplishment considering that over 16,000 wines from all over the world are reviewed each year by the publication. Ten Sonoma County wines were in the Wine Spectator Top 100 for 2011 from regions throughout the county, including Russian River Valley, Sonoma Coast, Alexander Valley, and Knights Valley.

The Wine Enthusiast honored Pinot Noir from Sonoma County in 2011 by naming Joseph Swan Vineyard’s 2007 Trenton Estate Pinot Noir the number two wine of the year in their annual “Enthusiast 100 Must-Have Wines of the Year”. Editors of the publication also lauded Bob Cabral from Williams Selyem, one of Russian River Valley, Sonoma County’s pioneering wineries, as Winemaker of the Year in their 2011 Wine Star Awards. Russian River Valley was nominated this year as the top region of the year, as well.

About Sonoma County Vintners
Sonoma County Vintners is the leading voice of Sonoma County wine, dedicated to increasing awareness and improving the quality image of its wines to consumers, media, and trade locally and globally. With almost 65,000 vineyard acres planted among the county’s 15 American Viticultural Areas (AVAs), Sonoma County is considered one of the world’s premier winegrowing regions, producing an unparalleled range of varietals and wine styles. SCV has promoted this diversity and quality since 1944, and currently represents more than 175 member wineries and 25 Affiliate Members. For more information on the wines and wineries of Sonoma County, visit www.sonomawine.com. 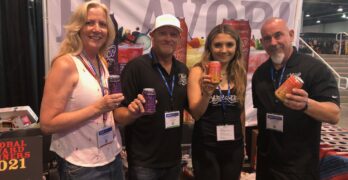 We’ve been covering the Nightclub and Bar Show in Las Vegas for a few years. … END_OF_DOCUMENT_TOKEN_TO_BE_REPLACED