Don and I traveled to Southern France this spring, combining a Viking River Cruise of the Saone and the Rhone rivers with a driving trip along the French Riviera.  One reason for traveling with Viking is the complimentary (and free-flowing) wine and beer served with each shipboard lunch and dinner.  Enough said. 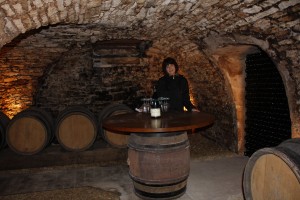 The caves of Beaune are interconnected underground. The barrels, made from special oak trees in Southern France, cost 700 Euros

Another plus for Viking is that most of the daily shore excursions are also included in the base fare.  The first morning of our cruise featured an outing to the medieval town of Beaune, the wine capital of Burgundy.  The Viking brochure indicated that we would be taking a “Burgundy wine route excursion featuring Hotel Dieu with wine tasting.”  I was rather enchanted with the idea that we would be tasting wine in an upscale hotel, only to discover that the French use the word “hotel” to name not only lodging facilities, but also a variety of public buildings.  For example, a Hotel de Ville is a city hall.  As for Hotel Dieu, it was a hospice or charity hospital from 1452-1971 and is now a museum.  It was wholly financed through the sale of wine from its vineyards.  No wine tasting inside Hotel Dieu for us, but the building is a must-see architectural jewel, and it houses a fascinating display of antique winemaking equipment.

As our sleek tour bus made its way from our dock on the Saone to the town of Beaune, we traveled for about an hour through the green and luxuriant Burgundian countryside, randomly plotted with small vineyard parcels.  This time of year, the dark and gnarly old vines appeared sadly stark against the delicate spring landscape.  Sadder yet was the fact that we summarily zipped past road signs that pointed one in the direction of Michel Lafarge and Le Montrachet.  Our guide narrated as we went.  Although not apparent from the bus, bud break had arrived.  We were in the Cote de Beaune region, and the word “cote” translates to “coast” in English.  “Cote” refers to the marine origins of the gold-colored, rocky limestone soils.  The great wines of Burgundy are made from 100% Pinot Noir or 100% Chardonnay grapes, and the wines are classified by vineyard.  The concept of terroir is clearly depicted here with the nearly infinite variations on exposure to the sun, slope, and drainage among the hundreds of small vineyards.

We arrived in the walled-village of Beaune and realized that it’s all about wine here!  Its narrow streets are lined on both sides with wine shops, wine cellars, wine museums, and gift/souvenir shops selling wine paraphernalia.
buy zoloft online buy zoloft online no prescription

After a worthwhile tour of Hotel Dieu, we made a quick stop for an espresso to take the edge off the bone-chilling cold morning.  It was now time for the included wine tasting at a local cellar.  Still cold, still jet-lagged, and still the A.M., we were not quite in the same mood for wine as we would be at, say, harvest season in Napa.  It also didn’t help that we (our group of 8 travel buddies), trying to pay for our coffee, got temporarily separated from the rest of the tour group.  After about 15 minutes of frustration and despair, we ran into a stray Viking guide who kindly reunited us with the rest of our tour group at Le Cellier de la Cabiote.  We were quite cranky when we arrived, finding the rest of the group seated, glasses in hand, cheerily sampling the first wine.  We, no doubt, missed the introductions and overview, but we were rushed in and provided with copies of the tasting menu, which follows, with my commentary:

Aligote is a minor white grape grown in the Burgundy region.  It is light and tart, but not in a good way.  It is often used in the Kir Royale aperitif.  (I prefer Kir Royales made with Champagne.)

This is a “village” Chardonnay from the Challonaise region.  It is fresh, lightly-oaked, and appley.  Nice for the price.

This is a  “village” red Burgundy (100% Pinot Noir) from the Cote de Beaune.  It has well-blended tannins, a complex structure, and flavors of smoke and raspberries.

Creme de Cassis is a specialty of Burgundy.  It is a liqueur made from currants and is used to make the Kir Royale aperitif.

Final Note:  It is apparent that Viking Cruise Line necessarily designs its wine-related excursions to appeal to travelers with varying degrees and levels of interest and knowledge of wine.  That said, they do a good job of meeting the needs of a diverse customer base and of providing an introductory experience.  However, my recommendation to the sophisticated wine enthusiast who wants a more intensive wine experience in France would be to travel independently and to arrange one’s own itinerary with a local guide specializing in wine tours.

Next Stop–Part II:  THE RHONE REGION 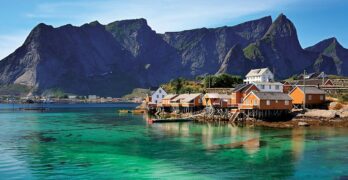