Today I am in the heart of Kyiv, the bustling capital of Ukraine. This is now my home and  I love this grand city. Kyiv is one of the oldest and most beautiful cities in Eastern Europe. The city has existed since the 5th century, and has long been established as an important commercial center. It is said that the name is derived from one of the city’s four legendary founders, and means “belong to Kyi.” There is also a legend that Saint Andrew ventured to the area and with him, he bought Christianity to the Slavic peoples. Since the Middle Ages, Saint Michael has long since represented the city and the duchy. 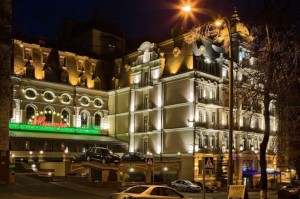 From the elegant and stylish Opera Hotel, I am joined by fellow sommelier, and very special friend, Elena Boiko. Elena chose the hotel’s fashionable international Bellini’ Bar for our tasting.

“Not only is Bellini’s a popular haunt for Kyiv’s posh notables,” Elena flashed me a quick smile. “They boast an extensive selection of cigars.”

“Ok,” I laughed lightly. “But neither of us smoke.”

“Larisa,” we both erupted euphorically. We have a mutual friend by the name of Larisa who loves to smoke cigars.

“Especially when she drinks brandy,” Elena was quick to add.

“We should have invited her.”

“She went to Lviv for the week,” Elena’s tone of voice took on a dreamy quality. “This is my favorite city in Ukraine. It is so beautiful and so Western European.”

The city of Lviv borders both Poland and the Carpathian Mountains, the fabled lair of Count Dracula. As far back as the 13th century Lviv was the capital of the Kingdom of Galatia-Volhynia.

“On that note, I am ready to enjoy some brandy,” Elena flashed me an eager smile.

“Grisha,” Elena smiled assuredly. “Your Ukrainian accent is coming along quite nicely.

Our first selection was from the Crimean based company, Koktebel. Elena had selected their 25 year old VIP brandy, “Kutuzov Speciale.” Koktebel is known for their French style spirits according to traditional brandy-production techniques. What makes their brandy unique is the volcanic soil in and around the Fedosia area, where Koktebel is based. The alcohol content is 40%. In appearance, our Koktebel is amber with golden highlights. On the nose, our Speciale was just that.
buy levitra oral jelly online https://www.ecladent.co.uk/wp-content/themes/twentysixteen/inc/new/levitra-oral-jelly.html no prescription

This is definitely a memorable spirit. There is a complex, delicate aroma with distinctive tones of both chocolate and vanilla. On the palate, it is rich, full, and harmonious. The finish is smooth and enjoyably long.

“This is definitely a brandy whose unique qualities can only be fully appreciated by the connoisseur,” Elena’s tone was one of delight.

“Precisely,” I concluded in agreement. “I especially enjoyed our Kutuzov Speciale. I found it complex, yet not overpowering. All in all, a very easy brandy to drink.

Our next selection was a Tavria Imperial Tavria is categorized as Alambic brandy. This process of alcohol distillation was first created by the Chinese some 5,000 years ago. The notable difference is a small opening in the top of the of the pot known as the “Alambic Vase.” Basically this is done to split various liquids boiling points. Tavria Imperial is then aged for 25 years using the Single-Barrel Aging method. The resulting alcohol content is 40%. In appearance, the Imperial is a rich dark gold. The nose is filled with an array of spices, chocolate, and cigars. On the palate, the Imperial is complex and elegant, with a very smooth and long finish.

“What I like most about Tavria Imperial is that it combines majesty and mystery along with delicacy and nobleness,” Elena said lavishly.

“I concur,” giving a nod of approval. “Tavria Imperial exemplifies all that is Ukrainian brandy.
buy zovirax online https://www.ecladent.co.uk/wp-content/themes/twentysixteen/inc/new/zovirax.html no prescription

It is very old, and a treasure in its own right.”

Our final selection was a Klinkov XO and from their “Family Collection.” This is an exceptionally refined style of brandy with an alcohol content of 42%. The Klinkov family migrated from Bulgaria to Ukraine and quickly established themselves as premier winemakers. Radostin Georgiev Klinkov is considered by many in the CIS (Commonwealth of Independent States) to be the grandmaster of brandy production.

On appearance, Klinkov XO is a dark amber in color. On the nose, there is a strong bouquet of fruit and walnut, which is often distinctive to this part of Europe. On the palate, there is an enveloping and pleasant taste of of nut. The finish is smooth and soft.

“I found our Klinkov XO very soft and elegant on my palate,” Elena paused to collect her thoughts. “I think this is a brandy that will appeal more to women.”

“Agreed,” I nodded lightly. “Although I do not object to such a refined style of brandy, I prefer a bit more complexity.”

“Yes,” Elena was quick to agree. “I also prefer my brandy a bit more robust.”

“I would also add a note of caution.”

“How so?” Elena queried.

“THe higher alcohol content will creep up on you,” I gave her a furtive wink.

“The cigar smoke is beginning to take its toll,” I coughed lightly. “I think it’s time to make a move.”

“I could go for a moonlight stroll along the river,” Elena smiled demurely.

“But that my friends, is another story … “