Recently my friends and I were at a wine and cheese party when the question arose, “what is the greatest wine ever made?” Though many wines were mentioned, only one prevailed like a Titan rising out of the mists in ancient legends. The 1947 Chateau Cheval Blanc is the most celebrated wine of the 20th century and perhaps every other century preceding it.

The 1947 Chateau Cheval Blanc is a wine produced in Saint-Emilion in France’s Bordeaux region. It is one of only four to receive the highest rank of Premier Grand Cru Classe. Over the decades every prominent wine reviewer has critiqued the 1947 Cheval Blanc. For many, it is the benchmark by which all Bordeaux should be measured. The most interesting fact is that 1947 was not at all a good year for Bordeaux. To begin with, the year was dominated by aberrant weather. By today’s standards, the wine was produced under primordial surroundings, after all, WW11 had only recently ended. The ’47 is also filled with a host of technical flaws that turned out delicious in spite of itself. 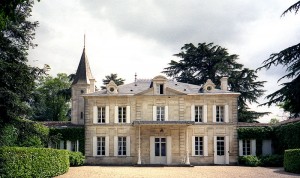 Chateau Cheval Blanc, French for “White Horse Castle,” had its early beginnings in 1832 when, Countess Felicte de Carle-Trajet of Chateau Figeac, sold 37 hectares (about 91 acres) to the Ducasse family. The purchase also included a narrow ridge that runs through Figeac and reaches Chateau Petrus, just over the border in Pomeral. However, the Ducasse family continued to produce wines under the Figeac label.

In 1838 the Ducasse family acquired more of the Countess’ vineyard, augmenting their earlier purchase to 41 hectares (about 101 acres). In 1852, Mlle Henriette Ducasse married Jean Laussac Fourcaud and the family officially began producing wines under the Chateau Cheval Blanc label. By 1862 and again in 1867, Chateau Cheval Blanc was taking international awards and proving itself a serious player on the international wine scene. This is primarily due to the vineyard’s considerable attributes. First, it borders Pomeral. Second, the Graves.

This is an important subregion of Bordeaux which is situated on the left bank of the Garonne River. This famed subregion is the only area within Bordeaux that has excelled in three primary wine types, reds, dry whites, and sweet wines. The Graves encompasses one-third of the vineyard. Lastly, The remaining one-third of Chateau Cheval Blanc’s vineyard is in Saint-Emillon. This is the key wine town in the Libournais district of Bordeaux. This appellation has thrived since the days of the Roman conquest. Today Saint-Emillon is home to not only Chateau Cheval Blanc, the list of renown wine producers includes Ausone, Angelus, Fideac and Pavie. An interesting fact to point out is that while Saint-Emillon is primarily merlot country, Cheval Blanc excels in Cabernet Franc. This has always made for some most distinctive wines.

Recently, fellow contributor Rusty Dale Sly and I had an interesting conversation on vintage wines. We agreed that oftentimes we found some real gems in what were considered off years. And why not. Many factors come into play when it comes to wine making. And putting it bluntly, we experts aren’t always correct in our assumptions. Such is the case with the 1947 Chateau Cheval Blanc. Those who have experienced this wine have all agreed that it is like no other. So at $304,375 for an Imperial (six-litres, 8 bottles) is it the best wine ever made? Frankly, I can’t say. I have not yet been so fortunate to try the ’47. The closest I’ve come is the 1955 Cheval Blanc.

Chateau Cheval Blanc 1955. In the glass, our Bordeaux Blend showed deep and dark in color. We also allowed our wine to breathe for 10 minutes in the glass. The release of a wonderful array of aromas was allowed to permeate the air. On the nose, it is quite earthy with hints of gravel, truffles, and cherry. The floral bouquet comes through nicely, while the cherry accents entice. On the palate, it is a surprisingly fresh, full-bodied wine. Though filled with vigor, it does not over power. The ’55 is elegantly rich in complexity and flavors of spice and fruit is followed by a sublime and long finish. The 1955 Cheval Blanc is a steal at $600 a bottle.

Today, Chateau Cheval Cheval Blanc is owned by by Albert Frere and Bernard Arnaut. Perhaps I should forward them a copy of this article and with a bit of luck, they’ll invite me to taste the legendary 1947 Cheval Blanc.

“But that my friends, I sincerely hope that will be another story … ”