The theater house lights lowered to a dim. As the title flashed across the “Silver Screen,” a hush fell over the audience. With the onset of the the film’s overture, Prince of Foxes, Twentieth-Century Fox’s 1949 swashbuckler classic opened to an eager crowd anticipating high adventure. Of course, the film starred the one and only screen heart-throb who could boast the mantle of, “Il Magnifico,” Tyrone Power. 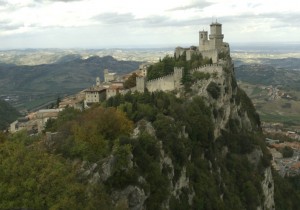 As our limousine pulled up to San Marino’s 11th century fortress, Guaita, a multitude of thoughts raced through my mind. Yet ever present were the chants of “Il Magnifico.” Filmed on location some 64 years ago, I could still imagine Tyrone Power guarding the fortress’ three towers as the forces of Cesare Borgia (played by Orsen Wells) ascended Monte Titano and stormed the walls of the Guaita.

Tonight, we were in for a magnificent night of vintage wine tasting. Dressed in our finest evening attire, we accompanied a select group of Italian wine aficionados to sample some wonderful Barolos of the 1960s.

Once again I am joined by long-time friend and fellow sommelier, Serena Dutto. We are in the Republic of San Marino, which is situated on Italy’s north-eastern side of the Appennine Mountains. Tradition has it that Saint Marinus, a mason, left the island of Arba in present day Croatia to build a church in foothills of Monte Titano. He eventually founded the city and State of San Marino in the year 301.

Twentieth-Century Fox’s Darryl F. Zanuck himself, could not have found a more majestic setting for what promised to be the event of the season. At length, the sommelier, complete with a tastevin around his neck, announced the evening’s wine list.

What makes Barolo so special and why has it been cherished by many throughout the centuries? Put simply, “Rex vinum, vinum regum, .” This is the Latin version of the saying, “The king of wines, the wine of kings” Perpetually loved by the kings of Savoy and aristocracies around the world, the Nebbiolo grape has always reigned supreme. However, prior to the mid-19th century, Barolo was a sweet wine. As modern techniques came into play. The art of wine making quickly progressed onward. It was French enologist, Louis Oudart, who first crafted Nebbiolo to an almost dry wine. This then became the first modern Barolo. The name, Barolo is from the ancient Celtic city, “Bas Reul,” meaning “low place.” Once the Romans captured the city, they began producing wines throughout the region.

The decade of the 1970s-1980s saw great great change in Barolo palates throughout the world. Vintners began producing wines the were fruitier and less tannic, and of course, consumed earlier. In the past, Barolos could be very rich in tannin and it could take up to 10 years for the wine to soften. Today’s wines can be aged for 5 years and labeled as Riserva. 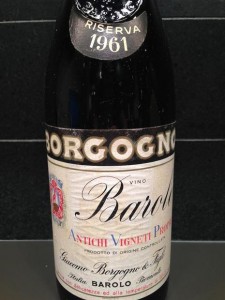 Let the festivities begin. First up, 1961 Giacomo Borgogno & Figli Barolo Riserva. The wine had been decanted for 2 hours. In the glass, this Barolo was much lighter than in the decanter. Yet this ruby colored Barolo did not lose any of its eye catching appeal. The nose, immediately thrilled our senses with aromas of dried roses, citrus peel. On the palate, the character wine remained true. Medium- bodied, earthy, macerated cherries, all melded into a wine of classic proportions with a memorable and long finish. The alcohol content is 14% with a price tag of $500. 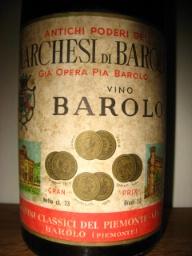 Next we enjoyed a 1961 Marchesi de Barolo. The wine had been permitted to breathe for a 3 hours and in the glass showed a remarkable dark red with bronze highlights. The nose was earthy with some notes of spice, cracked pepper, and fig followed by wood and dust. On the palate, this wine of character is powerfully structured, with good acidity, and complex fruit flavors. There is just a hint of tannin on the finish. The alcohol content is 13.8% with a price tag $200.

Our next wine, 1962 Cantina Terre del Barolo was decanted for 2 hours. In the glass, it is a beautiful deep ruby. The nose is filled with enticing aromas of roasted fruits, herbs, toast, and blackberries leap out of the glass. On the palate, the wine full-bodied and earthy. Ripe dark berry fruits dominate this richly decadent wine. The finish is soft and pleasurable. The alcohol content is 13.7% with a price tag of $180.

After letting the wine breathe for almost 3 hours, we were presented with our next selection, a 1964 Azienda Ceretto Barolo Riserva Annate. In the glass the wine is illuminating and a bright ruby. The nose is evolved and shows layers of aromatics. It is earthy with rose petals coming through, followed by hints of leather, dry cherries, and with a light smokey overlay. On the palate, the wine medium- balanced and elegant with citrus rind fruit dominating. The finish is solid and accented with a light intensity of cherry flavors. The alcohol content is 14% with a price tag is $250.

Our next selection was a 1967 Fontanafredda Barolo. The wine was allowed 2 hours to breathe before it was served. In the glass, it is brilliant and lively. Bright red in color and striated by brick colored hues. The nose was lightly scented with sweet red berries and cherries, followed by dominant earthy tones of mushrooms, dried roses, and a whisper of Autumn leaves. On the palate, the tannins are soft, yet powerful and accentuated by raspberries and minerals. A refined wine that is balanced with just the right amount of fruit and acidity. The elegant finish is long and pleasurable. The alcohol content is 14% with a price tag of $175.

Our last selection concluded with a 1969 Giacomo Conterno Barolo Riserva Monfortino. The wine was allowed to breathe for a good 2 hours. In the glass, the color was a medium purple with slight bronze hues. The nose opened up with lots of orange, walnuts, and dried violets. On the palate, the wine was very smooth. Initially, there was a suggestion of sweetness, though in actuality, the wine is very dry. Well-balanced and nicely acidic, the finish is enjoyable and lingering. The alcohol content is 14% with a price tag of $700.

As our limousine rolled quietly along, my thoughts centered on the evening’s vintages, “Such powerful wines,” I muttered softly.

“Yes,” Serena agreed. “Tonight’s selection seemed to overwhelm the palate, capture and hold it for ransom.”

“My sentiments, exactly,” It was almost as though she could read my thoughts. “The wines we enjoyed tonight are worlds apart from the Barolos in vogue today.”

“Precisely,” Serena spoke with calm finality. “And this is what creates their irresistible allure.” 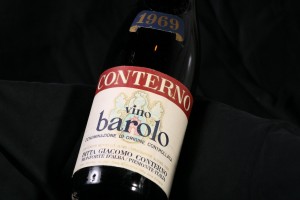 “What a night,” I thought to myself. “A gourmet dinner accompanied by the wine of kings, and a beautiful and enchanting woman at my side. Perhaps in my own

personal way, I am a prince of foxes … But that my friends is a different story … ”

The KFWE is the destination for wine and food lovers alike, affording … END_OF_DOCUMENT_TOKEN_TO_BE_REPLACED