First Tasting of Cuvees before Public Release to be Held on April 19, 2014 in The Funk Zone

Master Sommelier Brian McClintic and Sommelier Eric Railsback, partners of Les Marchands Wine Bar & Merchant,  the award-winning wine bar and retail shop in Santa Barbara’s Funk Zone, announce the 2nd Annual 2014 Santa Barbara County Wine Futures Tasting. On Saturday, April 19, 2014, more than 50 of the hottest local wineries will gather for an exclusive tasting next door to Les Marchands at 131 Anacapa Street, which will be transformed into an indoor tasting room. Attendees have the rare opportunity to be among the first to taste and purchase special cuvees available prior to release at a 20% discount off standard retail price. The Santa Barbara County Wine Futures Tasting will shine a light on the emerging local wine area and allow consumers and trade to secure allocations of the most dynamic and relevant producers of the region. Notable producers Au Bon Climat, Qupe, The Ojai Vineyard, as well as recent standout projects Sandhi and Tyler Winery participated in the inaugural 2013 tasting. Tickets for the 2014 Les Marchands Wine Bar & Merchant’s Santa Barbara County Wine Futures Tasting are $70 for advance purchase on the Les Marchands website or $80 at the door. The event will take place from 12 p.m. to 4 p.m. next door to Les Marchands at 131 Anacapa Street in Santa Barbara. Parking is available on the street or adjacent parking lots.

The Santa Barbara County Wine Futures Tasting exists to raise awareness of the pedigree and diversity of our local terroir.  Santa Barbara County is quickly gaining a reputation as one of the most exciting regions in the country to make wine. Prominent figures in the industry from around the world are recognizing the tremendous potential of the inlying appellations: Santa Rita Hills, Santa Maria Valley, Santa Ynez Valley and Happy Canyon.  The unique soil and climatic conditions of this coastal hamlet are inspiring ambitious new wine projects. Les Marchands intends to spotlight the small, hidden gem producers while paying homage to the pioneering wineries that paved the way.

In years past, the Wine Cask made the Santa Barbara County Wine Futures Tasting one of the premiere tasting events in the country.  Les Marchands Wine Bar & Merchant aims to build upon the foundation that Doug Margerum and his team laid down and continue to grow the event in scope and importance.

Recently awarded the “Wine Bar of the Year” by Imbibe, Les Marchands Wine Bar & Merchant is a labor of love between two sommeliers whose wine trips to Paris and Burgundy have inspired a fresh and dynamic vision for retail, dining, and education.   Translated as ‘the merchants’ or ‘the shopkeepers,’ McClintic and Railsback create an environment where intimate product knowledge meets personalized service.  This philosophy is lived out nightly in the wine bar but is integral to every phase of their business from private cellar consultation to custom education classes to the launching of Les Marchand’s wine clubs.  The great wine merchants Eric and Brian have admired over the years distinguish themselves by seeking out quality-conscious producers.  Their import selections are Eurocentric, representing the most relevant producers in France, Italy, Austria, Germany, and beyond.  On the domestic side, the focus relies heavily on local producers who are shaping and redefining the region.

Les Marchand’s commitment to sourcing out the finest products starts in the cellar and spills over into the kitchen where quality meets execution and the simplest dishes on their menu aspire to greatness. Share some mainstays from their cheese and charcuterie program, such as Camembert with Straus Dairy butter and freshly sliced Jamon Serrano. Guests can drop in and enjoy seasonal offerings prepared by Chef Weston Richards including local Hope Ranch smoked mussels, pork rillettes, and local farmers market pickled vegetables.  Stay up to date on special events and offerings by joining their mailing list, including weekly rituals, such as Ramen Noodles every Friday night and the renown Monday Night Special Menu and Flight of  Wine.

Brian brings 15 years of hospitality experience with him to Les Marchands Wine Bar & Merchant, a career spanning the major restaurant hubs of Los Angeles, Aspen, San Francisco, and now Santa Barbara. McClintic was one of four subjects featured in the acclaimed documentary SOMM, which chronicled his journey to the elusive Master Sommelier title, becoming the 107th individual in the U.S. to attain this honor. SOMM, distributed by Samuel Goldwyn Films, opened in 2013, receiving rave reviews by the public and film critics.  In addition to Les Marchands, Brian, and business partner Eric Railsback, have teamed up on a Santa Barbara Syrah project called Vallin, along with local winemaker Justin Willett and fellow Master Sommelier Dustin Wilson.

Eric’s emergence in the wine industry began taking shape in Santa Barbara nearly a decade ago.  After stints at the Wine Cask and the Hungry Cat, Railsback furthered his exposure to different regions and producers at Osteria Mozza and running the wine program at Gordon Ramsey in Los Angeles.  Eric has a strong connection to the wines of Burgundy.  Fluent in French and working harvests all over Europe, Eric brought his talents to Michael Mina’s RN74 – a premiere Burgundy-inspired restaurant in San Francisco.  There, he led a team of sommeliers for over three years before bringing it back full circle to Santa Barbara with the opening of Les Marchands Wine Bar & Merchant. 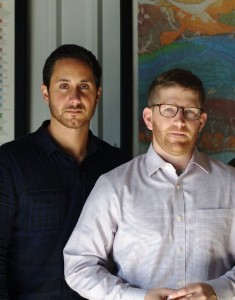 for more information the public can visit

The KFWE is the destination for wine and food lovers alike, affording … END_OF_DOCUMENT_TOKEN_TO_BE_REPLACED