The Henry Wine Group is a wine and spirits distributor with an excellent portfolio. Every couple of years, they give the trade and media an opportunity to taste a large sampling of their offerings. They call these events “Taste The World” and the most recent one was held on May 20th at the Beverly Hills Hotel. 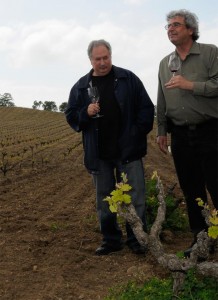 The lineup was huge [the tasting book was 218 pages], and I have long ago stopped attempting to taste as many wines as possible at these kind of mammoth tastings, preferring to focus on less quantity and more quality, spending some time to chat with the winery owner, winemaker or winery representative and learn more about the winery and the wines I am tasting.

A special treat for me was being accompanied by local Santa Clarita Valley wine [and guitar] legend Vic Herstein.

Some highlights for me were…

Winemaker Mike Sinor was pouring wines from Ancient Peaks and his own Sinor-LaVallee label. My favorites were:

It is always good to see Andrew Murray pouring his own wines. Really liked:

I’ve been fond of the Dashe Cellars Zinfandels for a long time, although they may come as somewhat of a revelation for drinkers used to the higher octane versions of this varietal.

As I mentioned above, I had the chance to hang out with Vic Herstein at this tasting. It was a great opportunity to taste the Alto Moncayo wines from Spain together, as he was the one who introduced them to me several years ago. All Garnacha [Grenache] and all excellent.

Other wines I recommend from the tasting:

And while I didn’t spend much time in the Spirits section [see Eve’s article about that], I did have to try the grappa offerings from Oregon’s Clear Creek. Both the Muscat and Pinot Noir grappas were outstanding, as was their cassis liqueur.

Love reviewing bubbly, and this time it was a Piper Sonoma Brut NV from Sonoma! … END_OF_DOCUMENT_TOKEN_TO_BE_REPLACED