Wowza – Suzanne Phifer Pavitt continues to blow us away!  Greeting us – on crutches from a recent surgery – we climbed up to see the brand new second story tasting room. (Last year when we visited it was under construction.) It was the perfect backdrop for us to visit, and taste the latest vintages of her award winning DATE NIGHT Cabernet Sauvignon and the second vintage of winemaker Gary Warburton’s Sauvignon Blanc.

Suzanne explained that the Sauvignon Blanc had some residual sugar, besides a few other surprises, so she suggested we taste the Cab first.  As Suzanne’s gut instinct about most things are dead-on correct, we switched up our usual routine and tried the Cab.

I was a wee bit distracted by the tasting notes provided by the winemaker, Ted Osborne, so I circled some of his that I found and added a few of my own: 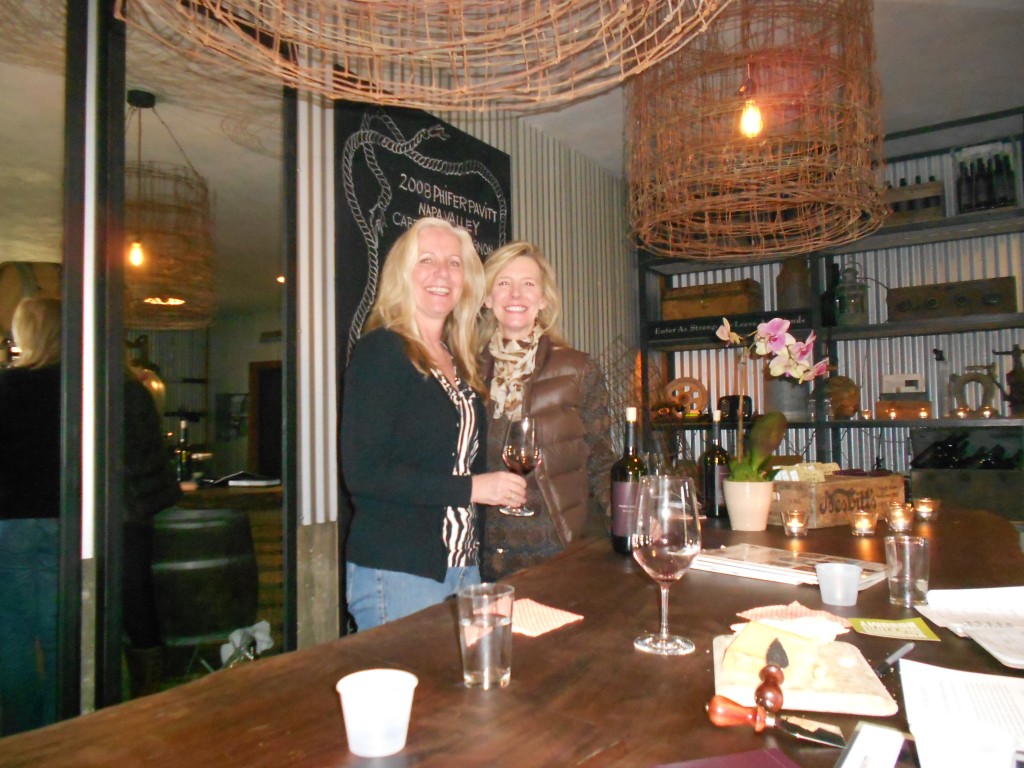 Osborne and I both found Cinnamon, tannins, chocolate. I also noted cinnamon toast, plum jam, spicy dark chocolate, and a perfect balance of fruit and tannin.

This is their second vintage.

Aromas of Sprite soda, green apple, sweetened grapefruit and a bit o’ honey. Flavors of crisp Ambrosia apples, apricots, pleasant mouth-coating viscous honey, and a long death-defying finish. (Tasting the wine it reminded me a little of the Kim Crawford Sauvignon Blanc for its nut fruit and low acidity.  However, Warburton’s work was better!)

Phifer Pavitt, prompted by Cub Reporter/My Husband Eddie Bushman, told us more about her work during our leisurely tasting.  She had recently returned from DC where she was honored, along with only six others, for being Fortune’s most powerful women in business.  One of her anecdotes was meeting Warren Buffet.  With her long, slim hand she reached through a crowd of ladies to shake his.  Then she introduced herself.  Buffet was intrigued by her boldness even further when she said, “Sixty-six percent of luxury goods are purchased by women, but not wine” and then vowed to change that.

“How will you change things?” asked the cub reporter, to which Phifer Pavitt said that one way was through “A Woman’s Palate” online magazine that has a campaign geared for executive women called, “Don’t Give Up The Wine List.”  Through their Wine Boot Camp a woman can be more confident about taking charge of a dinner she is hosting as well as she does the boardroom.  The program was started by Susan Citron and Sharon Harris – with Phifer Pavitt.

Phifer Pavitt’s goals, besides helping other women traverse the wine world with ease, is to remain true to her own: Never sell more than a case of wine to anyone.  This way when someone tells a friend about the winery, and that person tells their friends, not only will there be more people discovering Phifer Pavitt, they won’t run out of wine!

Conclusion:  Can’t wait for my annual lunch with Warburton to pick up the bottles I bought and hear more about his work in Calistoga!  And a possible DATE NIGHT Bubbly???

Did you miss me? My blogs over the past two weeks were “Vintage Eve” articles as … END_OF_DOCUMENT_TOKEN_TO_BE_REPLACED