We did a cellar clean out a month or so ago, a few older wines came out and some newer ones went in. We try and hold all Bordeaux for a minimum of ten years.

This one, the 2005 Chateau De Candale, had been languishing for 13 years just waiting for us. It was time. 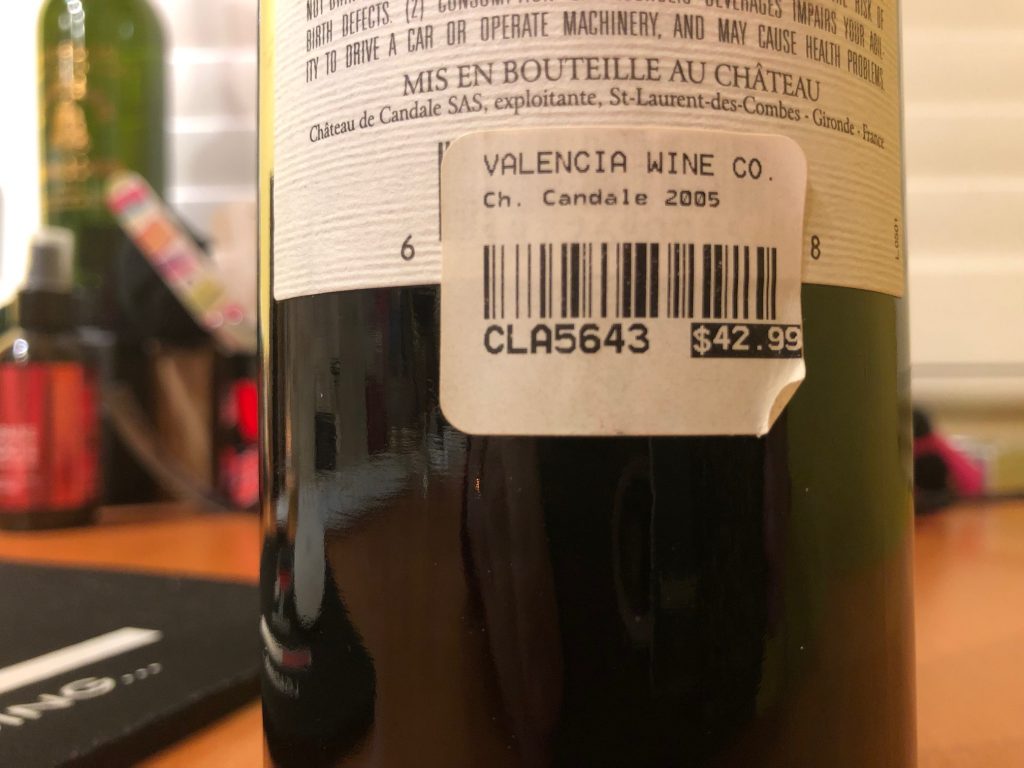 Notes on the Grapes

While a Merlot-based wine may be lighter and have more fruit-forward notes over a Cabernet Sauvignon, the addition of Cabernet Franc gave this Merlot a nice darker quality, in my opinion. (And it was good to see that the percentage of the grapes used in the wine were given on the back label as it’s always a crapshoot with a Bordeaux as to exactly what you may be getting.) Also, with the alcohol content at 14% the wine presented bigger than Bordeaux at 13%.

Another fun fact: the price sticker was still on the bottle, we had purchased the wine at Valencia Wine Company for $42.99. Knowing this was a wine bar and retail prices can be high, I was curious as to the worth of the wine now and did a Google search of it: it was $55 in 2009 according to a WE article and $35 on release according to WS.

Color: Blackberry, some brown on the edge (again that’s indicative of age) and opaque.

Flavor: Layers of spice, the same dark fruit I found in the aroma, rich mouthfeel, firm tannins, coffee grounds and a lingering finish of both the spice and fruit.

Fifteen minutes later: Got a little bit of jam and tobacco on the palate in the second tasting. Also some toasted oak and bell pepper on the nose. Nothing at all unpleasant, just an observation.

Pairing: We were having ham bone soup, second day so bound to be rich and hearty. The back wine label recommended a pairing or either poultry, lamb or grilled beef. Have to say that the wine took center stage with the rather average soup.

Conclusion: 93 Eve pts. WE gave it 91 points in 2009 and WS gave it 89 points in 2008. I think the wine benefitted from more aging, though one pal had the exact same wine and vintage a month ago and said it had hit its peak. Lucky us. Was also feeling nostalgic as we were regulars at Valencia Wine Company their first ten years or so, miss them and the tasting events they threw.