The team behind the new comedy movie The Argument (starring Dan Fogler, Emma Bell, Maggie Q, Danny Pudi, Cleopatra Coleman, Tyler James Williams and Charlotte McKinney and directed by Robert Schwartzman) is creating a multi-sensory movie-watching experience with the launch of The Argumentwine, a Sonoma Pinot Noir, to be enjoyed as a bundle with the movie. (Eve’s review of the wine and notes on the film are below, after this press release.) 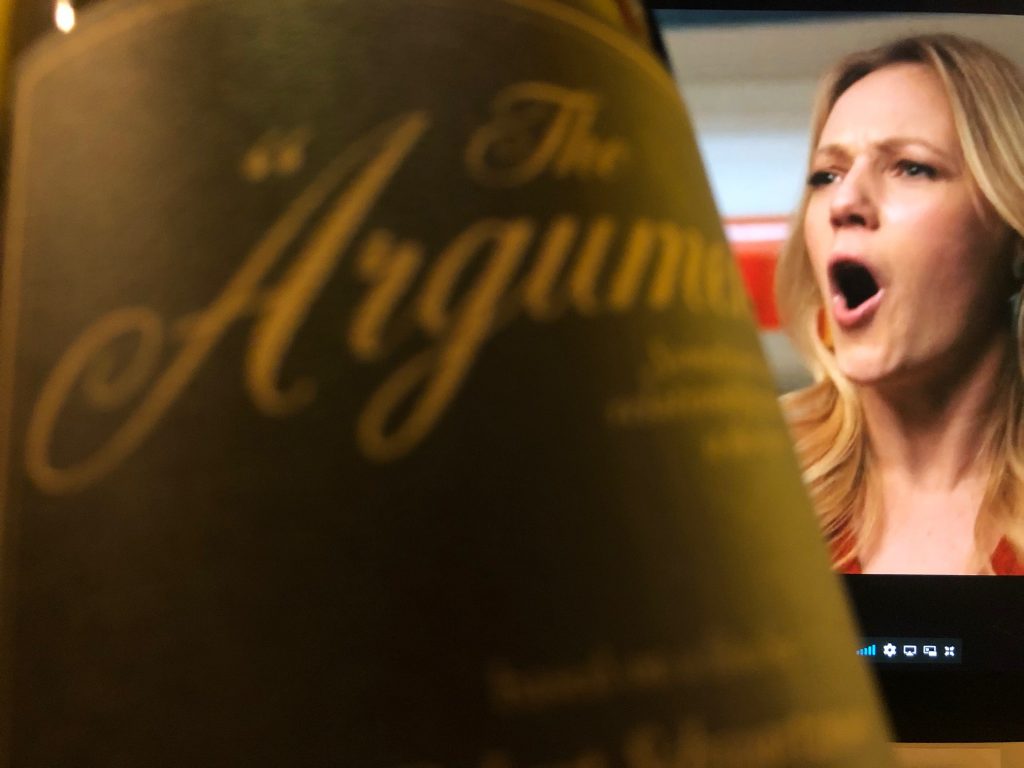 My bottle and a frozen frame of lead actress Emma Bell in full argument mode.

As enjoying new movies from the comfort of your home becomes the new normal, there’s no better time to pop open a great bottle of wine to enjoy with a great movie, and perhaps some cheese and charcuterie too. Inspired by the film, The Argument wine is the perfect pairing to enjoy alone or with friends, with 3 bundle options to choose from now available for purchase from TheArgumentWine.com.

Filmmaker Robert Schwartzman debuted his third feature film on September 4th in theaters and on-demand. The offbeat American comedy is set in a Los Angeles apartment where Jack (Dan Fogler from the Fantastic Beasts franchise) and his girlfriend, Lisa (Emma Bell from The Walking Dead) get into an argument during a get together with some friends over wine and charcuterie. As the argument escalates, the party comes to an end and all their friends leave — but the party isn’t really over. Jack and Lisa recreate the party over and over again — with all their guests — in order to figure out who was right.

The Argument wine is a 2019 vintage with fruit harvested from some of the best vineyards in Sonoma County. It was made by winemaker Matt Ahern of The Wonderland Project who notes aromas of Black Cherry, Coriander and Assam Tea.

The wine is sold as a single bottle, two-pack or three-pack with the movie and can be purchased from TheArgumentWine.com.

Check out the trailer for The Argument HERE.

I was certainly intrigued by the idea of a movie screening paired with wine, in the comfort of my own home! Especially liked the mention of The Argument taking place over the quintessential wine paring: cheese and charcuterie. And instead of a Ground Hog Day-esque film, with the main character not being able to wake up to a new day, this was unpredictable as the arguing couple purposely redo the same evening just to see who the heck was right…in the argument. To make it a wilder ride, they include the same guests and later, a set of actors!

Within a few minutes of the film I hated every character – but wait – that didn’t last long. There were twists I did not expect, some insults but no injury, but don’t worry, I won’t give you any spoilers here. The characters enjoyed a LOT of bourbon, but no red wine. Let me remedy that here with my review:

The nose of The Argument wine was filled with cherry cola (not sweet like the characters), brambly (like some characters), with notes of toasted oak, marshmallow and pine needles. (All of the characters had needling imperfections.)

The taste had that same cherry cola, raspberry, smooth and balanced with a medium length – much like the film at just under 90 minutes. And by the film’s conclusion the argument was over and, I’ll give you this, there was a smooth and happy ending.