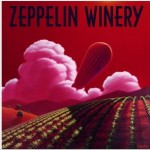 Zeppelin Winery ( http://www.zeppelinwinery.com) owns no vineyards. In fact, it doesn’t have a physical winery and definitely not a tasting room.

Yet, winemaker Stillman Brown manages to make some delicious wines, when he is not consulting for other wineries or posting on Facebook.

So, that is why our small caravan drove up Vineyard Drive and deep into Peachy Canyon to meet with Stillman [also known as Swilly Idle] at a vineyard / winery he is working with the Gill family to develop.

I think my companions thought I had finally lost it, as we kept driving and driving, looking for the landmarks that Stillman had provided so we would know we had not lost our way. But, despite the fears of my fellow travelers, Stillman’s directions were perfect, and as we made a final turn we saw him and his car parked right where he said he would be. 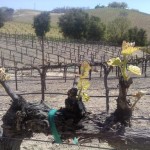 Stillman greeted us warmly and showed us around the vineyard property he was in the process of developing for one of his clients.

Then we went back to his car and he opened the trunk. Feeling like we were involved in some illicit activity, I helped him to pass around the glasses [only one had a stray lipstick mark] and he opened the bottles he had brought with him. Two of the wines were from his winery – his Cabernet Sauvignon and his Syrah. I was especially partial to his Syrah. In addition, he gave us a taste of the wine he was working on for the owners of the property we were visiting – a hugely powerful Syrah, 17.5% alcohol, yet with no heat and incredible fruit and balance.

[I also recently had a bottle of the 2009 Black Zeppelin, which is a Petite Sirah – a monster of a wine that needs more age but opened up nicely with about half an hour in the decanter.]

Stillman also shared with us his background, some of which I already knew. I recalled that he was winemaker co-founder of the old Jory Winery back in the 1980s – I have fond memories of a bottle of their Black Hand. Stillman actually produced his first Red Zeppelin while at Jory, as a tongue-in-cheek parody of Randall Grahm’s Bonny Doon Cigare Volant. When his partner in Jory retired, Stillman continued Zeppelin as his own label.

Perhaps best described as “interesting”, Stillman’s Facebook page says a lot about him, most of which I’ll leave to anyone willing to brave being his Facebook Friend to uncover. According to his page, Stillman attended UC Berkeley as a poli sci major and he’s been a self-unemployed winemaker since 1984.

While posting on Facebook seems to be Swilly’s primary occupation these days, somehow he manages to occasionally be a consulting winemaker for several wineries, play in his band Elvis Died For Your Sins, throw epic parties [such as the upcoming-as-I-write-this Wet Zeppelin III, which is scheduled for May 4th through 8th in San Luis Obispo County]. He also manages to fit in time to make his own great Zeppelin Wines. I am looking forward to future releases, but am really looking forward to more of that 17.5% Syrah!