Robert Simon owns two wonderful restaurants in Pasadena: a/k/a an American Bistro (www.akabistro.com) and Bistro 45 (www.bistro45.com). It had been way too long since we had visited either. But then we received the following via email:

Edibles for Epicureans
Events and Wine Dinners
In the continuing tradition of Bistro 45’s discovery of new wineries and terrific winemakers, Jim Mack of Jemrose in Sonoma County will be with us to personally proffer and pour all four of his remarkable repertoire of Rhone inspired renditions.  Both the Rhone Report and Steven Tanzer last year touted Jim and Jemrose as being “remarkable and stunning,” honoring him with 90+ scores on each of his wines.

Please join us, seating is limited…a dinner not to be missed!

Well, that was more than enough to pique my interest. I love the Jemrose Syrah that Shane Finley produces under his eponymous label Shane, and the Cardiac Hill Syrah made by Carlisle is consistently my favorite Syrah from Carlisle (which means it is probably my consistently favorite Syrah). Now, I had an opportunity to taste these wines straight from the source, along with Bistro 45’s excellent food. 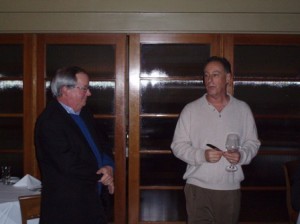 We arrived early and were warmly greeted by Robert Simon, who took us to our table. As we were sipping our Viognier, we had an opportunity to chat with winery owner Jim Mack.

Jim told us that he and his wife Gloria purchased 20 acres in Sonoma’s Bennett Valley in 2002. Initially they only sold their grapes to other wineries, but in 2006 produced about 500 cases under their own label – Jemrose (www.jemrosewines.com).

Jim also explained the origin of the name Jemrose. Feeling that the name Mack is too closely associated with trucks, he instead came up with a name to honor his family members:
J (Jamie, his daughter)
E (Erica, his other daughter, who joined Jim at dinner)
M (Mack)
Rose (Jim’s Mother). 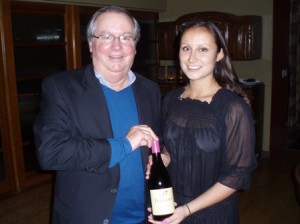 The wines were excellent.

While I love Viognier, too many made in California taste sweet to me, possibly due to residual sugar that is not necessarily mentioned on the label. But this one was about bright fruit, very crisp, with white peach and floral notes.

The Grenache had lots of fruit as well, and a nice long finish.

The Cardiac Hill vineyard is so named due to the steepness of the hill it is planted on.  The Jemrose Syrah version did justice to the vineyard. Wonderful rich wine.

My favorite wine of the evening was the “Gloria’s Gem”.  Admittedly, I was a little nervous about this unusual blend of Syrah and Merlot. And honestly, I don’t think this would have worked with just any Syrah. But, Cardiac Hill Syrah can be pretty monstrous if untamed, and the Merlot rounded it out perfectly. A beautiful wine.

Jemrose only makes about 1500 cases total, so if you want it, you should probably go to their website to order it.

As always, the food was excellent and care had obviously been taken to match the wines to the courses. Our server Mehdi took wonderful care of us. The Australian tawny port and dessert at the end rounded everything out perfectly.