Mélisse, the celebrated two star Michelin restaurant of  Chef Josiah Citrin, is proud to present its impressive program of thirty newly conceived cocktails and highly allocated spirits that have been added to their beverage list. An ambitious collaboration between Citrin, Mélisse Sommelier Brian Kalliel and acclaimed cocktail consultants Pablo Moix and Steve Livigni, the program was completely revamped and developed to match Citrin’s dedicated pursuit of excellence in food, beverage and service.  In keeping with Citrin’s philosophy of using the finest products from local producers and farmers, the new selections are designed to match and complement the artistry and taste of Mélisse cuisine.

Citrin feels that development of the cocktail list is a vital component to the Mélisse style. “We strive for quality in every aspect of the diner’s experience. It just follows that our cocktails should showcase our style as much as anything else we do, from the amuse bouche at the beginning of the meal to our cheese table at the end of the evening,” says Citrin. “This is a logical step in keeping our style current, creative and part of the taste of a today’s discerning guest.”

Moix agrees, saying, “Because Mélisse provides one of the best dining experiences in the country and Chef Citrin’s genius has been so well realized, the focus will always remain on the food.  Our contribution as consultants is to add an extra dimension to the guest experience by creating cocktails that will truly stand on innovation and complement the beauty of Citrin’s cuisine.” 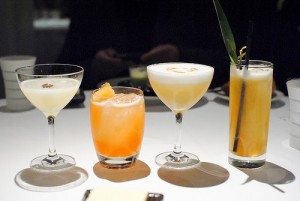 Moix and Livigni, who recently received three nominations as finalists for the prestigious Tales of the Cocktail® 2012 Spirited Awards® for their work with La Descarga and Harvard & Stone, are honored to be working with Citrin.  Together they have spearheaded the Craft Cocktail revival, perfecting drinks, overhauling menus, and heading bar programs for esteemed establishments such as SBE, OneGroup/Gainsevoort Hotel Group and now Mélisse.  Their richly conceptualized and textured themes are featured at La Descarga Cuban Rum Bar, Harvard & Stone, Pour Vous, Black Market Liquor Bar,  and Plan Check in little Osaka. Their work has been featured in GQ, Esquire, Angeleno, Los Angeles, Los Angeles Times, Los Angeles Times Magazine, L.A. Weekly, Food & Wine, L.A. Canvas and 944.

Since Mélisse first opened its doors in 1999, Citrin and his restaurant have been a tour de force in the world of fine dining and a fixture in California’s culinary landscape.  Citrin’s cookbook, In Pursuit of Excellence, debuted in October and is available exclusively through Mélisse, the restaurant website, www.melisse.com, selected retailers and Amazon.  The book is a recipient of the 2012 Indie Book Award and is a finalist for the 2012 Benjamin Franklin Awards competition in June.

Mélisse is known as much for its refined setting as it is its artistic, flawless cuisine and exceptional service.  Citrin passionately frequents local Farmers’ Market and manages to coax unexpected flavors from his carefully chosen ingredients. They are presented as edible works of art.  Citrin’s In Pursuit of Excellence showcases what has kept both the chef and Mélisse at the top of the culinary game.

Mélisse, located in Santa Monica, has become a leading restaurant for fine dining in greater Los Angeles, promising a memorable experience in the artful presentation of Citrin’s dishes served in a setting of supreme elegance with the highest standards of service.