Eddie hates cats.  So it was with some amazement on my part that he seemed to agree to Samantha’s unwavering requests for one.  He gave her several hoops to jump through first: having good behavior at school, writing her letters and numbers neatly, cleaning her room and clearing the dinner table.  And then he quadrupled the number of each task he had assigned!  (I of course had to agree to be responsible for the cat’s welfare.
buy clomid online https://healthcoachmichelle.com/wp-content/themes/Divi/css/new/clomid.html no prescription

)  When Samantha wailed at week two that she thought she’d never get a kitten I silently agreed with her, assuming that my dear husband, of “superior intelligence” fame, had discovered a way to painfully postpone the inevitable.  He was plotting against the two females of the house: praying on the attention span of one and the inherent laziness of the other. 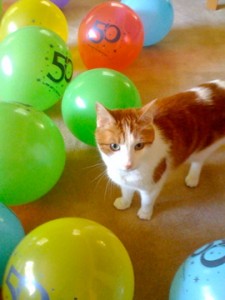 Wrong!  By the end of week three we knew it was going to happen and brought home several books from the Newhall library to help educate us all.  We read a few pages every night and slowly began to feel more prepared for the new member of the Bushman family.

I had cats growing up.  I was enthralled with the warmth and cuddliness of Snowball and my brother’s cat Popcorn was even more interesting.  Although Popcorn did not share Snowball’s friendly qualities he gave something more to our family.  He bathed my brother.

Mike’s favorite pastime was to lay on his back in the center of our small living room while Popcorn started licking his rough tongue meticulously from Mike’s chin to his forehead.  The bath never, much to my mother’s dismay and mine ended there.  Popcorn seized the moment and worked up and through Mike’s stiff hairline, seemingly to show his undying love.  Other days, Popcorn brought Mike gifts.  Strewn across our front porch we would find remains of the birds and small rodents that had dared to cross Popcorn’s path in her quest to care and protect Mike.  I wondered what we could hope to expect from our new cat.

We met “Lou” at The Cat Doctor and were immediately enraptured.  (We also thought it would help Eddie to have another male around the house.)  Would his constant purr and willingness to be held by a six-year-old give us what the books described as a cat with a good “personality”?  Or even if that were our luck, would Samantha choose a bath given by Lou over one by her dear old mom?

The staff at The Cat Doctor was equally informative, supportive and compassionate.  They agreed that Lou would be a fine addition.  Decision made we confirmed future immunization appointments and headed for the door.  We stopped up short though at the sight of a grown “handicapped” cat that Samantha just had to meet.  The Cat Doctor, not unlike other veterinarians I doubted, were caring for this large cat that was paralyzed from the waist down.  I was a little daunted by the sight of his elongated torso and straightened hind legs but the staff assured us that he was perfectly happy.  It made our decision to “donate” money to their responsible animal rescue program feel just apropos.

First idiot thing I did was inviting all of the kids from our street over to meet him.  I quickly realized our kitten wouldn’t last very long and herded everyone out the door within a half-hour.  We let Lou roam his “room” (our former guestroom) sniffing, scratching and completing his toiletries.  The constant rumble emanating from his tiny throat continued all day, and later when he finally settled into the small space between my neck and collarbone, all night.  After listening to his purring all night and contemplating what I was now responsible for I decided to call a friend that had formerly worked for a veterinarian to find out what else I needed to learn.

Neutering, spaying, vaccinations, teaching children the proper handling and care, spending the money on quality food, keeping him indoors safe from cars, disease and predators topped her list.  She continued with keeping the litter box clean, constant fresh water, yearly well cat visits to veterinarian, a well ventilated home, introductions to other non-cat killers (A dog if has been researched already.) with an adjustment period before you leave them alone in your home.

Declawing you cat is a big issue.
buy amitriptyline online https://healthcoachmichelle.com/wp-content/themes/Divi/css/new/amitriptyline.html no prescription

If he/she ever gets out he/she is completely unable to defend itself.  They can’t climb trees or do anything to get away from a predator quickly.  All they can do is bite to defend themselves; yet their swipes do nothing without claws.  It’s also a painful procedure.  Clipping their nails once a month (I’ve done it twice now with Samantha’s old baby nail clippers—takes all of ten seconds total.), your veterinarian can show you how and prepares them to allow you to continue doing it.

Check with your veterinarian before giving catnip in case there is an age restriction.  Kittens, not unlike babies, can swallow or choke on small items and toys.  When they are little get them used to being combed and brushed daily if you can, weekly as a minimum.  This helps keep your cats loose hair out to cut down on hairballs, matting, shedding and to check for fleas.  If fleas are detected then obtain the proper medication from your veterinarian.  Giving your kitten a scratching post will help them to learn where scratching can be done.

Always rescue a cat; don’t buy one because if you buy a purebred cat it encourages breeding.  “Rescuing” a cat saves a life.  Spaying and neutering saves hundreds more.  By being a responsible cat owner you can save lives and teach your children responsibility.

I forgot to ask how to cure the licking baths but I’ll wait that one out.  We are earnest in keeping him indoors safe from the “predators” outside and from him bringing small, catchable ones, to our door.  Samantha has learned not to squeeze him too hard because the meow he let out made her cry twice as hard.  Eddie has the warmest lap in the house so, if you can belief it, ten minutes of petting Lou has replaced his evening single malt scotch for stress relief.  And so far I’m enjoying Lou’s rough kisses, the way he nuzzles my computer mouse and while for the entire four hour duration of writing this column he tried to “catch” the jumble of letters on the screen as I sent them up there!  It took a little longer but it was oh so sweet.

LOVINGSTON, Va./PRNewswire/ -- Virginia Distillery Company and members of the … END_OF_DOCUMENT_TOKEN_TO_BE_REPLACED