Yep, it’s another pasta recipe!  But I’ve never had a pasta recipe that called for jarred BBQ sauce before.  It appealed to Eddie, and, except for failing to retrieve the shallot from my shopping cart (isn’t there always one ingredient left behind?) it seemed perfectly fine.  Except – everything had to be made at the same time, which is tough on a Chef 101er.  I had Eddie help and he only burned himself once and splattered chicken broth across the counter…at least he didn’t use every pot in the house as usual.  We were drinking Domaine de Canton Ginger Martinis while cooking which went fine with the dish.

Changes I felt compelled to make to the recipe are in the usual italics below: 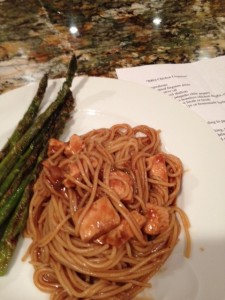 Directions
Pasta
Cook the pasta according to package directions. (We pulled early as the recipe called for us to heat it again and didn’t want gluey pasta)

While the pasta is cooking, heat the oil in a medium sauté pan over medium heat. Add shallots and jalapeño pepper; sauté for 2 minutes. Add the chicken; sauté for 3 to 4 minutes or until chicken is no longer pink.

Add the drained cooked pasta, the stock, and half of the barbecue sauce; simmer for 2 minutes then add the remaining barbecue sauce. Serve with grilled asparagus.

Grilled Asparagus
Lightly coat a grill pan with olive oil. Remove tough stems from one bunch (about 1lb) asparagus. Cut stalks into 2-inch pieces (oops, I didn’t notice that, we had nice long stalks). Drizzle with 1 tbsp olive oil; season with salt and pepper (Ed added Bay Seasoning and we ate every single piece); Grill for 4 to 6 minutes in grill pan or until asparagus is tender.

PORTLAND, Maine – Registration has kicked off for Vinexpo America and Drinks … END_OF_DOCUMENT_TOKEN_TO_BE_REPLACED