The Collins College of Hospitality Management at Cal Poly Pomona has been around an incredible 75 years. Per their website, it “is the oldest and largest hospitality management program in California”. They recently held a dinner to celebrate this achievement at their on-campus restaurant – The Restaurant at Kellogg Ranch.

In attendance were alumni of the school, as well as distinguished guests and supporters of the program. The menu was presided over by chefs who had graduated from the school, and the wines poured were made by winemakers who had attended the college — and in some cases from grapes grown on the college owned property – Horsehill Vineyards. 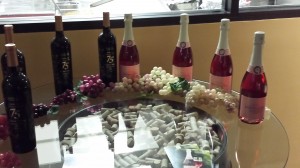 Here is the menu, including the wine pairings: 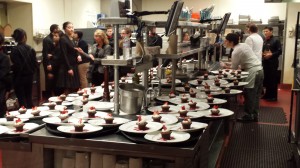 While I often am more concerned about the wine than the food I am pairing it with, it was an amazing experience having the various chefs showcase each course with a wine they felt accompanied it perfectly.

I had not known that Chef Mark Peel of Campanile had attended the Collins College and I really appreciated the opportunity to taste his food along with all the others.

In addition, I had not been aware that Ian Blackburn of Learn About Wine was an alumnus of the college. His Beekeeper Cellars Zinfandel was a perfect pairing with the quail dish and was a huge hit at our table, with multiple pours requested (and received).

But as a certified beef lover, my favorite dish had to be the short ribs. Full of rich beefy flavor. The Horsehill Cuvée made a great pairing, and I was even more impressed with the Gentleman Farmer Cabernet, more people who I had not realized had attended the Collins School.

I’ve written about Cal Poly Pomona before and knew about their onsite vineyard, but I hadn’t had the opportunity to taste wine from the property.  I was really impressed, particularly with the sparkling wine that was served with the appetizers. The cuvee, a blend of Zinfandel, Syrah, Touriga Nacional and Mataro was also drinking very well.  The vineyard shows a lot of promise, and it was exciting to hear that they are going to soon be adding additional varietals to the existing Zinfandel plantings. The original cuttings came from the Galleano family vineyard in Rancho Cucamonga and will soon be joined by the likes of Petit Verdot, Carignane, Cabernet Franc and Alicante Bouschet.

The future looks bright for the Collins College and, based on my conversations with some of the student servers, the hospitality industry is in very good hands.