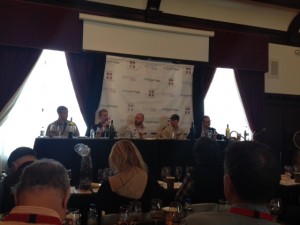 Parrish: He went to Davis, and from there worked with Robert Mondavi.  He was in Napa for 20 years, then bought 160 acres in Paso, planted 20 acres in Preston.

Parrish wanted enough “growing degree days”, which means that the Cabs need a warmer area, with good root stocks.  Parrish said, “A winemaker must educate themselves on the best clones, then look for calcareous soil, and also some clay…” and added that in Paso they have the “Goldilocks syndrome” in growing grapes and making wine as “It’s not too hot and it’s not too cold.”

Parrish mentioned that he had netted canopies that didn’t work to keep the birds from eating his fruit, and the netting hurt the grapes.  He heard about Falcons to keep birds out of vineyards and a falconer from Oregon was brought in.  “It’s unbelievable,” Parrish said.  “Like a Great White in the ocean but over the sky.”  Now no bird damage to the canopies.

“This wine has black fruit, tobacco, spice, and luxurious finish begging that you drink more …” 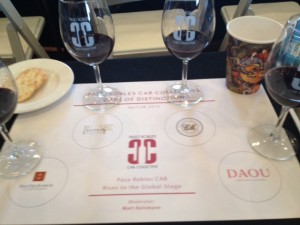 Saas: Halter Ranch is located in the west side of Paso Robles, and they have the largest planting on the west side.  With 15 varieties now – as Saas had removed some things – the owners had bought the property in 2000 and sold fruit to Justin.  Over time the owner decided to commit and build the winery. They dry farm to the degree that they can, and as they have 3 substantial wells, the water shortage is not effecting them.

Mooney: The Mooneys are 7th generation Californian.  Mooney looked at Sonoma and Napa, and then chose Paso and started here in 97 with all small production Bordeaux.

Mooney said, “The conversation of east side verses west side needs to go away.” Paso has over 600,000 acres so they can have many different varieties that can do well, and can be blended together from different areas.  “For me, lets spread the word on Paso Robles.”

As far as the question of water, Mooney commented, “We have had a huge water problem for years, El Niño is due next year, droughts come and go, the shallow wells have dried up and now the county must approve new plantings.  Hoping that ordinance will change.  No issue yet for them in Creston.”

Mooney said, “This wine has plush tannins and structure.”

EB: Younger nose in compared to the others in the tasting.  More bright fruit and acidity; same profile in the mouth, I want to give this wine a little more time, however, if you like bright fruit go for it!

Daou: In a 2 minute history, Daou spoke of how he co-founded DAOU with his brother Georges and how Paso Robles has the “most French-like terroir we could find in California.”  Their mountain is 100% calcareous clay – which gives natural acidity. Daou added, “Let the dream come to Paso…high density planting, lots of research of clonal selection to reflect terroir and what to produce in high quality fashion.”

Daou said they produced 550 cases of this wine, which saw “new French oak aging for 24 months, still needs some time.”  It sold out in five weeks in tasting room.  This terroir can produce a more expensive Cabernet, Daou believes, “It’s doable and it’s sellable.”

Daou wants to see more age-worthy wines produced in Paso and the continuation of the “Cabs of Distinction” Cab Collective over the next ten years.  “We’re not trying to be Napa,” Daou said. “Our soils are more like the 1982 ripe year in Bordeaux with natural acidity and minerality in the wine.   It’s always good to look at history, 1982 was a warmer year in Bordeaux; we are achieving ripeness every year…”