Most guests at the second annual TPC/West Ranch Art & Wine Gala, held this past Saturday night, had never been greeted with mellow jazz, Dampierre champagne and a Sancerre, appetizers and this on the opening page of any evening’s program:

More than 80 years ago, my great uncle, Walt Disney,

realized the need to support and educate the many artists that

were the lifeblood of the Walt Disney Company. Through his

and dogged determination, Cal Arts was founded in 1970 here

in the heart of the Santa Clarita Valley.

That vision has ﬂourished beyond even their lofty expectations.

As Cal Arts has grown, so has the arts community in the Santa Clarita Valley.

This evening marks yet another gathering of both communities.

Sheri and I are proud and honored to serve as its honorary chair.

This is a special evening in a special place with great food,

great wine and great guests. Enjoy the evening and thank all of you

for your generous support of these worthy arts organizations. 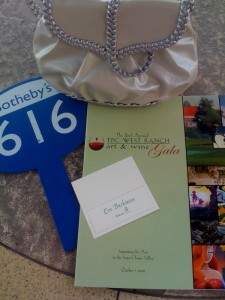 And with that welcome, guests lingered the first hour of the evening, enjoying their appetizers and drinks while bidding on several silent auction items.

I had my eye, and wine 10ers in mind, with three collections Steve and Amy Elzer donated from their private cellar:

And this for my husband that had to work that night: Downtown Toon Town (unframed ) – Mike Kungl of Jessica Rabbit in all her slippery svelte-ness.  Before I had a chance to beat out other happy bidders, it was time for the dinner to begin.

“Tonight is about enjoying your wine…and more wine…so bid a lot.” Said Roy P. Disney as he greeted guests and then turned the microphone over to the Chair of the event, Dave Bossert.

“I want to thank my co-chairs, Event Producer and Director Michele Golden, my wife Nancy Bossert who designed the gorgeous programs again this year and…Bob…where’s Bob Keller?” Bossert asked the room and a wave went up in acknowledgment.

“I want city councilman Bob Kellar to know that all the printing was done locally here in the Santa Clarita Valley!”  Many laughed over that one…

“And Guy Lelarge,” Bossert continued.  “This was an idea that we came up with last year and just thought, ‘Let’s do it’.  Even with this economic downturn we still grew 20% this year!”

To this Lelarge responded, “Is there anything better than art and wine?  Thank you for being here.  Tonight we also want to thank Mitch Cosentino for his unbelievable generosity.  If it wasn’t for people like Mitch we wouldn’t have such great wine.  And, one last person, my wife, Helen Leprairie will be playing tonight after the auction so no leaving early!”

Winemaker Mitch Cosentino also added, “This is what I keep coming to Santa Clarita Valley for each year, to work with Guy.  Tonight, to get you started on your dinner I have the Novelist, a ‘Red wine drinker’s white’ that you can drink throughout the dinner or, for a red, we have my Sangiovese.”

All matched well with Mitch Cosentino’s wines. The Novelist (a crisp blend white Meritage of Sauvignon Blanc and Semillon that is partially fermented is French Oak barrels.) and the Sangiovese that really opened up to rich smoky tones after a few minutes in our glasses.  Several guests noticed it and lingeringly enjoyed.

“It rivals any afternoon,” said Mark White of the Novelist.  “It’s both floral and delicious.”

A final wine, Couples & Co. “Pure Cos”, would have it’s official release by the time this story hits the Beacon.  Not even labeled yet, Mitch signed a few bottles for auction.  “There are two wines in my series with pro golfer Fred Couples.”

It was fun to watch the paddles go up during dinner, though no one put there’s up as soon as I did when a lot was announced with wine in it, but no worries.  I hadn’t been left unattended in an auction in a long time.  The Auctioneer quipped that my hand went up well before he even called the item.  (I had a program!)

But at least there was enough art for everyone!  Amazing paintings and prints, sculptures and movie premiere tickets.  And the fact that many of the artists were in attendance, many bid on their friend’s work.  It was lovely to see such support of friends, and the arts.

Then co-sponsor and chick singer Helen Laprairie may have sung “standards” but they weren’t “standard” by any means…the crowd, well all the blonds and two brunettes that shall remain names (D & D you know who you are), danced in a circle and then in circles around the room.

The evening proved to be just as Disney predicted.