For a long time, I’ve focused on whether a wine provides me with a pure and clean expression of fruit. But now along comes Abe Schoener, winemaker and owner of the Scholium Project (http://scholiumwines.com/), and changes all of that. 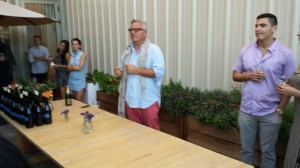 Recently, we had the pleasure to attend a barrel tasting of Scholium Project wines, led by Abe himself (accompanied by apparently his entire winery staff, including Brenna, who appears to be an extension of Abe’s right arm, handling all that contact with us pesky wine club members as well as doing her fair share of grape stomping – so I guess she is an extension of Abe’s right foot, but I digress) and hosted by the Urban Radish in downtown Los Angeles.

(Another digression – if you haven’t checked out Urban Radish (http://www.urban-radish.com/), you really should. It’s a neat wine and food store and restaurant in the downtown L.A. arts district. And right near where Abe plans to have his downtown Los Angeles winery, which means this parenthetical comment really isn’t much of a digression at all.)

Right off the bat – these wines are different from what you are accustomed to tasting. One of the main reasons is that all equipment and barrels at the Scholium Project winery are cleaned with cold water. That’s it. “What about those pesky microbes?” you might ask (along with “Why is the word ‘pesky’ used twice in the same story?’). Well, they’re left alone to do their thing with the wine. In fact, Abe says “husbandry of microbes” is probably the most important factor, along with the vineyard source, in how the wine ultimately turns out. The actual varietal comes in third, and you’ll rarely see it mentioned on the bottle label. Instead, Abe will give it a fanciful name (due to Abe’s previous incarnation as a professor of Greek Philosophy) and give due credit to the vineyard. The wines are typically single-vineyard productions, and they come from great ones, as you can see from the tasting list below. Actual varietal information can be tracked down on the Scholium Project website, for those so inclined, and that’s where I got the information below for the ones I couldn’t remember from the tasting. The website is also well worth visiting, not just for buying these very rare wines, but also to read Abe’s philosophies and explanation of the wines.

2012 Michael Faraday (Chardonnay from the Michael Mara Vineyard, which is owned by the Idell Family and farmed by Steve Matthiasson). I was really happy I read Abe’s story on the website about this wine, wherein he explained why he kept the name of the vineyard on the label, which the Idells named after their children, in spite of his initial inclination to name it after Steve Matthiasson, who is a rockstar in his own right. We had the pleasure of dining with the Idells at the vineyard a couple of years ago. They are extremely gracious people and their vineyard produces amazing fruit.

2013 Prince In His Caves (Sauvignon Blanc from the Farina Vineyards) (I try not to say I have a favorite wine, but year-to-year, even as things change, this is the SB I most look forward to.)

2012 Wolfskill Reserve (Cabernet from the Wolfskill Vineyard in Suisun Valley)

Abe said he prefers white wines, and considers his reds as made for white wine drinkers. From my palate’s perspective, his whites are made for red wine drinkers as they are far more complex than your typical Sunday afternoon poolside quaff. I won’t try to describe the wines – I’m bad at that anyway and definitely couldn’t do these justice. All of them make you stop and think. You can taste the varietals, but you can also taste the place, and those microbes – Abe even pointed them out in a wine that came that close to triggering a gag reflex. If you’re looking for a smoooooth merlot, you’re in the wrong place. But, if you are up for a challenge instead of just a beverage, Scholium Project is worth exploring. 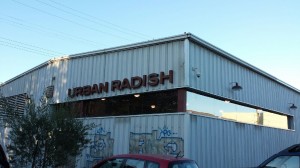 Finally, I close with some exciting news that I hope to have more information about soon. As mentioned above, Abe is planning a downtown Los Angeles winery. He will make wines there only from Southern California grapes, having recently been exposed to the great old vineyards in the Cucamonga Valley, as well as some San Diego properties that interest him. There is more Scholium in all of our futures.

Who likes sparkling wine? The ultimate wine for celebration, and celebrated as a … END_OF_DOCUMENT_TOKEN_TO_BE_REPLACED