On Tuesday January 26th New Moon Valencia held its first 5-courses 5-wines pairing dinner featuring Michael-David Family of Wines. This was something so new for Santa Clarita – a Chinese Food and wine pairing – that I had to attend. 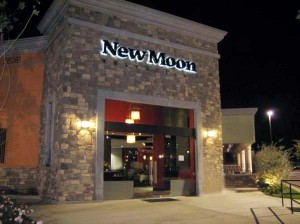 New Moon is usually described as a Chinese restaurant; this night I was to find that their “Asian-Fusion” styled food is not your typical Chinese.

Michael-David Family of Wines is well known for it’s 7 Deadly Zins and it’s 7 Heavenly Chards. What isn’t well known is how well wine pairs with Chinese food. I searched the net to see what the standard was and found most pair with beer, whites from sparkling to unoaked Chards, but not with many reds.

In What to Drink with What you Eat by Andrew Dornenburg and Karen Page, my bible and starting point for every pairing question, one red wine seemed only tentatively suggested for Chinese food: Zinfandel. With a special italicized notation to avoid tannic wine.

But, in another section of the book, I found that Stir-Fried Asian-Style Beef and Short Ribs could be paired with Cabernet, Merlot, Pinot Noir, Shiraz and the Zin suggested above. I now felt a little more prepped and ready for what might lay ahead.

Led past Asian screens to a private dining area, we were handed tall flutes of Sparkling Duet and wonton wrapped Rangoons filled with minced shrimp, warm cream cheese and scallions.

“The 100% Lodi fruit in this Prosecco-styled sparkling wine is made from both the traditional Pinot Noir and Chardonnay,” began Keith Shulsky, the Southwest Regional Sales manager and Sommelier from Michael David. “This is a good start for our evening. The Michael David family has been in Lodi for 7 generations, with plantings in 1850 and wine production in the early 1900’s, I believe in the family behind the wine.”

We liked the pleasant sweetness of the sparkling against the tang inside of our Rangoons and looked forward to the next wine.

The rich fruit of the 2006 Incognito Viognier was matched with chef Pung’s Cha Shu Barbequed Pork. Guest Erin Dixon was an immediate fan.

Next up was a 2007 Seven Heavenly Chardonnay with New Moon Chicken Salad. New Moon is known as “The first family to introduce Chinese Chicken Salad 45 years ago” with a signature light dressing and nuttiness. Assistant Manager Frank Cerna described the pairing as “Balanced, crisp, this is one of my favorite Chards.” While Keith prompted us into even more interest by telling of the 7 cooperages (different barrel types) used to make the wine “pop in your mouth”.

2006 Sixth Sense Syrah, my personal favorite of the night, and dubbed “a Rhone styled-varietal” was poured alongside a surprising pairing: Shrimp in a Blackbean Sauce. Whether it was the green bell peppers or garlic, all at our table agreed: Shrimp would normally not mate with a Syrah, but the sauce it was cooked in made it work perfectly.

“Shelby’s Beef”, a start of sugar with a bang of black pepper, was served with Incognito “rouge”. I found the pepper a bit daunting, and my husband Eddie had skipped right to the 7 Deadly Zinfandel to have with it instead.

Our last wine of the evening, making it 6 and not 5 in total, was 2006 Gluttony Old Vines Zinfandel. Served with chocolate covered strawberries and a rich chocolate mousse-styled cake, we were all gluttonous…our evening was drawing to an end. We had not only learned and tried something new, we knew we’d be back as Michael David Wines might only be found, at the moment but not for long we agreed, at New Moon Valencia.

New Moon Restaurant Valencia is located in the Gateway Village Center at 28281 Newhall Ranch Ranch Road, Valencia, 91355, 661-257-4321 http://www.newmoonrestaurants.com and you can find more information about the wines at http://www.lodivineyards.com

Back in 2009, or maybe even a bit earlier, I had an appointment with our … END_OF_DOCUMENT_TOKEN_TO_BE_REPLACED