Now and then I actually write about wine. Well, take that back, I go to a blind Syrah tasting, hosted by my friends in the Santa Clarita Vintners and Grower’s Association, ask them to take down notes and send them to me. So this really is a wine review column, but not just from a wine 101er, but from the real SCV experts: 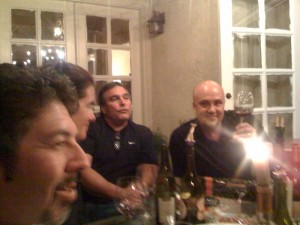 Here are our notes from the Blind Syrah tasting, 3/28

Great turn out.  14 wines, we made it through all of them.  I never doubted we wouldn’t make it. 🙂  Except for 1 or 2 wines, all the wines were very good.  Chris C., next time, please bring croissants & breakfast rolls with your #6. 🙂  Seriously though, 2-3 wines stood out.  Who is hosting the next one, what wine are you going to pick?  Looking forward to it.

PS: The best part about hosting a blind tasting event…..finishing the left over wine the rest of the week!  Tonight we finished the Old Creek, DeLisio, and working on the Sunstone.

Wines tasting in this order.

#10
2005, Zaca Mesa, Syrah
Tobacco, complex, French oak, very good. Roman said it’s a young Paso Robles, Patty & Thomas said it’s European and he would spend $30 ore more on it, Chris Connolly said it was a French wine, the other Chris C. said high alcohol. One of the best of the night. (Eve got that at Costco for less than $20!)
Group rating: 93-98

#12
2005, Mantis, Syrah, Paso Robles, Mantis is the very first project of what is now known as SCV Winemakers and Growers Association. Rose and geranium nose, nice finish. Thomas liked it and Chris Connolly thought it was homemade.
Group rating: 80-89

#14
2001, The McRae Wood, Shiraz, Clare Valley
Blueberry with hint of spice. Chris C. said it was Australian and awesome and Tomas liked it.
Group rating: 91-94

The newly formed SCV Vintners and Growers Association is a group of over a dozen local farmers, growers and winemakers.  They meet regularly to discuss their own winemaking techniques and to help one another with the pruning, picking, bottling and labeling.  In their love of winemaking they have all become great friends and also enjoy meeting just to taste and discuss wine. And having their personal blogger in attendance…