In spite of the great seminars and meals around town, the most exciting parts of the weekend for me were still the big Opening and Closing Tastings. As mentioned previously, the tastings featured 145 tasting tables at which to taste the wide variety of what the Rhone wines have to offer. With an understandably heavy-Central Coast representation, there were wineries from all over California as well as from Oregon and Washington. Internationally, wineries from Australia and Spain attended and of course there was a huge French contingent. 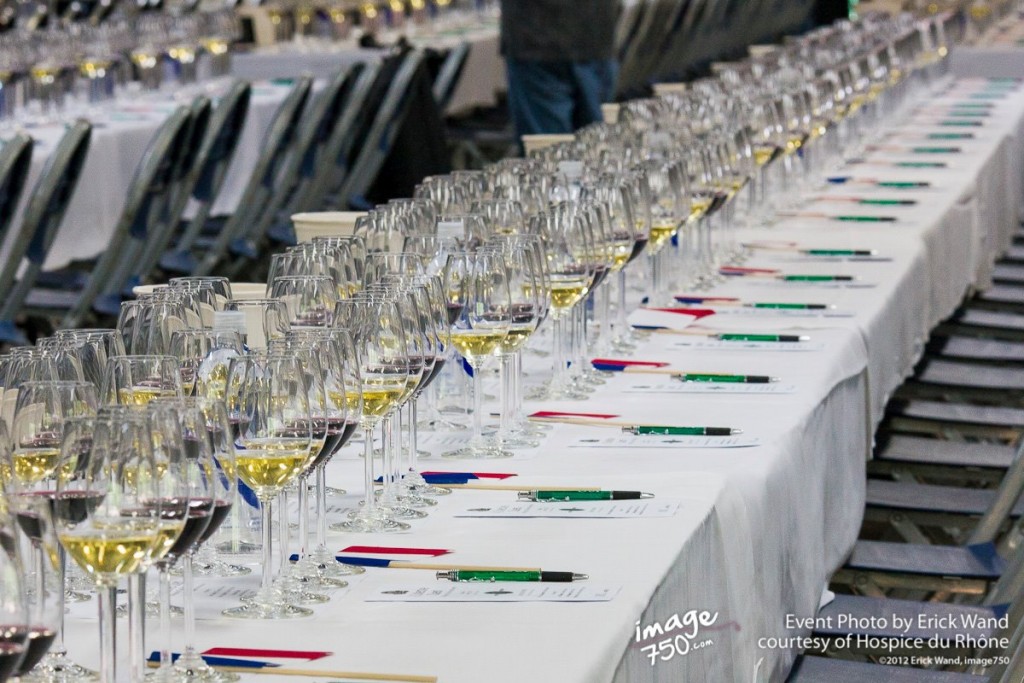 The Opening Tasting focused on wines from 2011 and prior while the Closing Tasting had the same wineries pouring current [2012 and younger] as well as wines that had not yet been released.

While I probably spent too much time chatting with many of the participants and attendees [but then that’s a big part of these kind of events], these were some of the wineries I tasted and enjoyed the most, either at the Opening Tasting, Closing Tasting or both, with just a few notes, as I’ve praised many of these wineries before.

Alta Colina [Paso Robles, CA] – wonderful vertical of Toasted Slope Syrah and the new Grenache has a finish that goes on forever.

AmByth Estate [Templeton, CA] – enjoyed the Grenache Blanc with skin contact that made it an “orange wine”. I’ve had mixed encounters with this technique, but this one was very tasty.

Copia Vineyards [Paso Robles, CA] – a new one for me. Delicious, powerful wines.

Mollydooker Wines [McLaren Vale, SA AU] – loved the 2011 Carnival of Love, which had a now local winemaker involved in the production, Jeffrey Strekas of the next winery, ONX.

Saxum Vineyards [Paso Robles, CA] – you know the importance of the event when Justin Smith is pouring old and new wines. The busiest table until he ran out. Delicious.

Turley Wine Cellars [Templeton, CA] – known for excellent Zinfandels, I’ve often felt that great as Turley’s Zins are, they might even be surpassed by their Petite Syrahs. A vertical of Hayne PS helped to support this notion. Wow. And note the spelling because, well…Turley.

Turtle Rock Vineyards [Paso Robles, CA] – Don Burns is assistant winemaker at Saxum and he makes great wines under his own label as well.

The Closing Tasting was not the end of the festivities, as there was a Farewell BBQ to be enjoyed. Frank Ostini of Hitching Post was in charge of the food with entertainment provided by Monte Mills and the Lucky Horseshoe Band. Wine was abundant on all the tables, and it was fun to chat with some of the winemakers in attendance, such as Carl Bowker of Caliza, Neil Roberts of Clavo Cellars and Steve Gower of Crux, among others.

Before closing, I’d like to mention that the HdR person of the year for 2016 is Sam Beall. Sam’s Blackberry Farm has hosted the Tennessee HdR event for the last seven years. His recent untimely passing saddened all of us who knew him or just knew of him.

Kudos to all involved in this event, most especially to John Alban [Alban Vineyards], founder of the event, as well as Vicki Carroll, President of Hospice du Rhone and Faith Wells of Faith Wells Communications who served as Consulting Director of HdR. Not to mention all of the workers and volunteers. Great job, everybody!

The KFWE is the destination for wine and food lovers alike, affording … END_OF_DOCUMENT_TOKEN_TO_BE_REPLACED