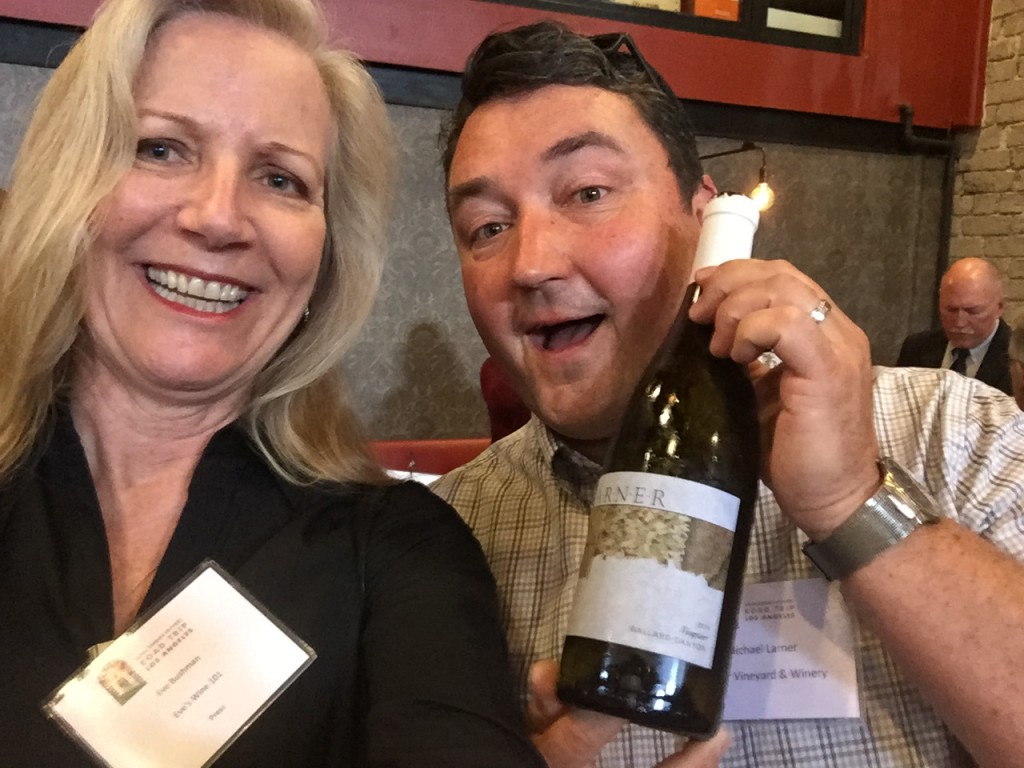 Eve and Michael Larner of Larner Vineyard and Winery.

As I’ve said before and will say again: One of the best ways for wine 101ers to learn about wine is to do a comparative tasting of the same grape or region. This time it was wine only from the Santa Barbara AVA, and to narrow it down further, I only did the Rhone portion of the tasting that included Viognier, Marsanne, Roussane, Counoise, Petite Sirah, Grenache, Syrah and Mourvedre (the last three often blended together and referred to as a GSM).

Wine 101 note: Rhone wines traditionally come from Rhone, France, where only certain varietals are allowed to be grown and turned into wine. Of course someone living in the Rhone valley could plant a grape that isn’t considered the best for the terroir (soil, climate, etc.) but they wouldn’t be allowed to sell it commercially.

Now, back to this stateside tasting. A few fun photos can be seen here of my afternoon at LA’s Republique restaurant tasting all things Rhone from Santa Barbara County. And my favorites of the day are listed below in bold, however, I didn’t make it to every table.

Larner 2014 Estate Viognier was a wonderful mix of refreshing fruit and vibrant floral, and my fave white of the day. Followed that up with Michael Larner’s 2011 Estate Syrah, Ballard Canyon.

Stolpman, poured by Jessica Stolpman, had a perfect line-up – as I had tasted them all recently. But I still enjoyed tasting them all again, including the 2013 L’Avion, blend of Roussanne and Chardonnay, Ballard Canyon and the 2014 Grenache, Ballard Canyon.

Tercero was my first stop as winemaker Larry Schaffer was free when I walked in. Another I had tasted recently, it didn’t stop me from enjoying (again) his 2015 Mourvedre Rose, Happy Canyon of Santa Barbara; 2014 Verbiage Blanc blend of Roussanne, Viognier and Grenache Blanc, Santa Barbara County; and a lovely Verbiage Rouge red blend.

Zaca Mesa is an old favorite I used to love to visit and I was not only happy to revisit, but to discover two new wines to enjoy: 2012 Z Blanc, Santa Ynez Valley and 2011 Mesa Reserve Syrah, Santa Ynez Valley.