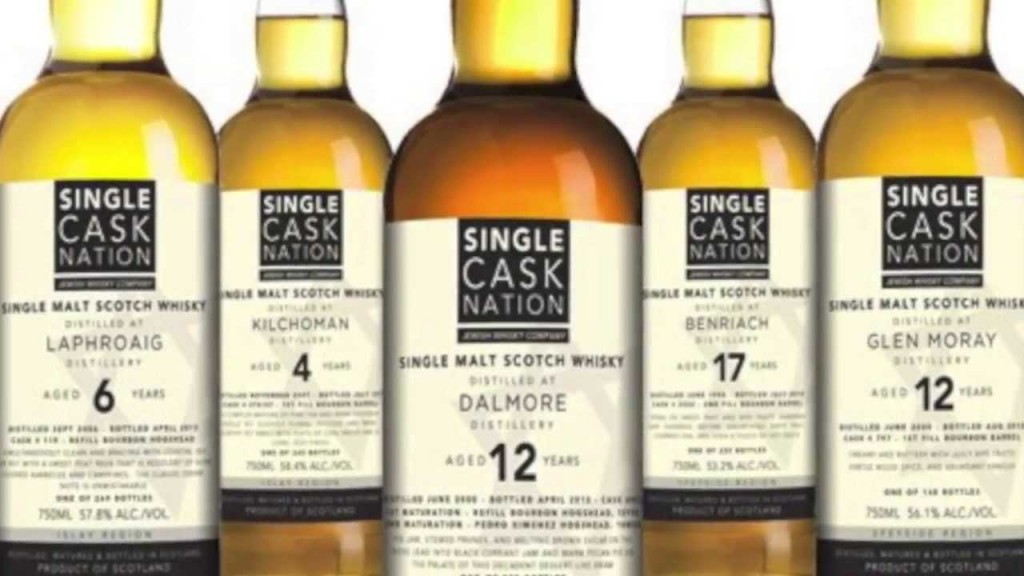 Our host Joshua Hatton began by telling the tasters assembled that he started out as a whisky blogger and continues to write on JewMalt.com. By 2010 he started an independent bottling company with a friend. They would go to a distillery company, ask about bottling, and so far everyone has said yes.  Their company distills one barrel at a time.

When they visit for a tasting Joshua is asked what kind of cask they would like, and depending on the distillery, they know what type of cask to ask for.  They had over 1000 samples and only made three cask strength whiskies.  Of that they only had 148 bottles to share of the Glen Moray (tasted below).  In a quest to get whisky knowledge out to the public the distillery may also give their own vintages to compare side by side.

Josh is joined in the company by Jason Johnstone-Yellin, the Vice President and Co-founder and Seth Klaskin, the Secretary and General Counsel.  When they taste and select which barrels to purchase Josh said, “all three must be wowed.”

The Jewish Whisky Company has the motto “One nation, under Whisky” in bottling their selected rare single cask Whiskys. The company does the independent bottling and only sells through membership and not in retail stores.  http://www.SingleCaskNation.com

Each whisky we were to taste was accompanied by notes regarding aging and yield.  All were bottled at cask strength sometime between 2012 – 2013 and all hovered at 50% ABV* or more.

Josh then asked the group if they had the opportunity to drink cask strength before and I think my hubby and I were the only ones that didn’t do this on a regular basis.

Glen Moray 12: Bourbon cask 12 years. No nose burn even without water.  Buttery hazelnut nose, honey, sweet nose, smoke, butter, some lemon.   On the mouth some burn without water, nutty, white fruit.  (According to Josh they chose high-octane whiskys that you didn’t have to add water to.)

Arran 12: Bourbon cask and then Pinot Noir. The distillery is located on the West coast of Scotland. Arran is a fan of Macallan and designed their stills alike. Josh called this one a “Kookie Bear” as it went from Bourbon to Pinot Noir cask for four years giving it a double maturation.  This was the first that wowed the three business partners and became the first to bottle.  Dark honey color, creamy nose with nuances of almonds.  The nose followed through to the taste – with what Josh described as dark chocolate and red fruits.  I’m liking it!  Even more with water, the Pinot Noir influence may be what balanced it out.

Benriach 17: Bourbon cask.  There’s the PEAT MOSS I hadn’t nosed yet!   Not overwhelming – thankfully.  But yet, I can discern some sweetness.   My palate wasn’t ready for the Bananas Foster that Josh mentioned on this one.  A little oily with some dried fruit.  Not a fave as I’m not a peat fan, but I can appreciate the gentleness of this interpretation.

Laphroaig 6: Bourbon hogshead. Lightest color so far.  Totally different nose, not as peaty, reminiscent of a Tequila for some tasters including me, with cigarette and vanilla on the palate.  More creaminess came out with more water.  Brandon Bartlett, Laphroaig rep and Sr. Sales Manager with Jim Beam, said that he hadn’t had one like this before and liked it.

Kilchoman 4***: Bourbon cask.  This is one Chris Uhde turned us on to at Whisky Live LA.   Another peated Whisky, but not as much according to Marshall.  Now, at my third peated taste, this one had a sweeter quality on the nose.  Happy to learn that a Buffalo Trace Bourbon stamp was on this cask.  I actually liked this one despite the peat.  The nose (after water) and taste is not all peat moss; instead I got cream, cinnamon, and an oily mouthfeel.  Josh said it was his “Breakfast Whisky” that helped him shovel snow one cold blustery morning.  And tasting in the morning, while the palate is fresh, Josh said that’s the best time to taste whisky.  He sampled 8 casks before settling on this one.  This one really shined he said; for the mouthfeel, sweetness and gunpowder (a spent gun shell/powder) qualities.

Conclusion: Join The Club To Get These Whiskies!

***Kilchoman is a very young distillery, established in 2005, its pretty recent to Islay.

“Single Cask Nation is a private, members-only whisky society.  The only way to gain access to our exclusive releases is to become a member of the Nation.  While access to our bottlings is the number one benefit associated with membership, we’ve also put together welcome packs for each membership level.”   Memberships are explained in detail here.