Besides my articles on touring and tasting at The Scotch Whisky Experience and Edinburgh Gin there were many other adventures my husband Eddie and I had during our first magical trip to Scotland. 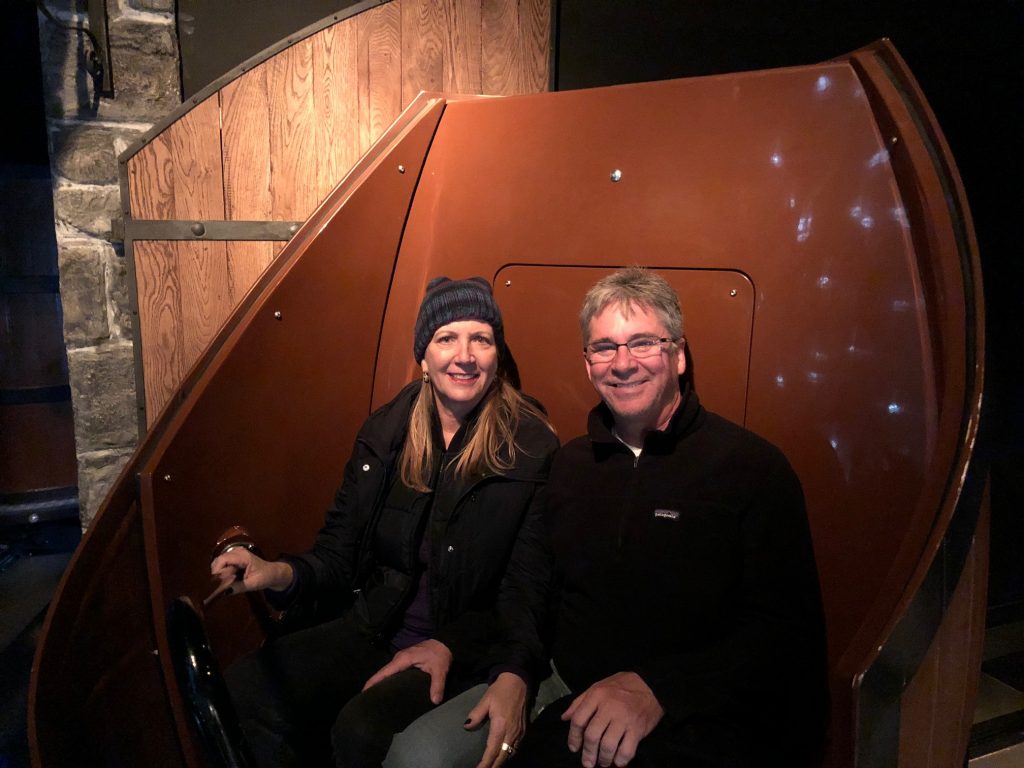 The whisky ride that starts the Scotch Whisky Experience.

Eddie had arrived ahead of me for business in London, so I met him there when he was through to travel to Edinburgh together. We desperately wanted to take the train, as we heard that the views were incredible, but due to other factors we had to fly. And that turned out to be the least eventful part of the trip. We told ourselves that since we had a three-day bus tour through the Speyside region we would be rewarded then. But first we started with touring a bit of Edinburgh, Scotland’s capitol.

And by the second day in Edinburgh, when my husband had to resort to spooning to keep me warm at night even though I was wearing flannels, I had more than warmed to Scotland. These are just some of the memories from our trip – in three parts – I wanted to share with readers, most are whisky-based while some share our thoughts on the people, the landscape, food and tourism:

On day one in Edinburgh we utilized some of our research. We knew we wanted to tackle the steep climb to the highest point of “Arthur’s Seat” so we made sure we selected the best day when no rain was expected, and none had arrived the day before to wet the rocky path.

This ideal day turned out to be our first day in Edinburgh. But FYI, I have a fear of heights. I battle it (love the Soarin’ Disneyland ride but my legs go numb from the knees down each time) so I knew what I’d have to do for the climb: not look down, ever. However, as it was as steep as promised, I still battled the numb-below-the-knees feeling as well as a pounding in my chest and some panting.

It was incredibly worth it. A 360 degree view of Edinburgh. And on a day a rally had been planned, with people from all over Scotland carrying/wearing/waving the blue and white Scottish flags all in the name of secession from the UK. We have no opinions on what Scots need best, that is up to them and their vote, but what an incredible sight. One we will never forget. (And, I know you are dying to know: Yes, there was an easier way down!)

Once we climbed down from Arthur’s Seat we started our walk back to our hotel by taking the Royal Mile route. This is a famous path for its many pubs, restaurants, shops and mingling with locals. We popped into many shops to look at woolen kilts, gloves and cashmere scarves, as well as the usual souvenirs. (I really wanted the coasters that pictured Scottish men with their kilts flowing up from the Scottish wind, but couldn’t imagine that they would be appreciated as much at home.)

Other highlights from our time in Edinburgh included a reservation to tour the Edinburgh Castle, fittingly perched on the top of the Royal Mile – and the view is breathtaking. Several buildings make up the castle and each had its own museum or display, including the crown jewels, the former prison, Mons Meg (giant cannon) and the great hall. The museums included both the National War Museum and the Regimentals Museum. These museums are not to be missed; we were awed learning about the battles and the history in scenes, writings, paintings and clothing. Learn more here.

We had fun checking out the various restaurants for local ale, cocktails, single malt whisky as well as fish n’ chips, oysters, steaks, fresh salads, Sunday Roast, gamey charcuterie and sharp cheeses. One bar, the Devil’s Advocate, was located on one of the many narrow “clos” between main streets that you have to climb down (or up depending on where you start) to reach. We were rewarded with a killer bar menu with cocktails slightly different than our own, as well as some people-watching.

We had two special dinners while in Edinburgh, the first was at the highly recommended Balmoral Hotel, in the Prince Bar, where we happily snagged an unreserved table, ordered very dry martinis (whisky would soon be the name of the game and martinis seemed to overflow with vermouth or brine in the UK) paired with oysters and charcuterie. We had a second round of drinks before we walked back to our hotel.

The other restaurant that we were referred to is Kyloe’s, which happened to be just steps away from Edinburgh Gin. The menu proved a bit more gamey than we were adventurous enough to try but our meal, filet mignon, and a nice split of Bordeaux, was spot on. Both restaurants were also perfect for people watching.

If I’ve interested you, next week I will share Scotland Part two: Granton-on-Spey and the last installment will be the week after that, Scotland Part Three: Speyside Whisky and The Views.