Los Angeles – The Legacy Cellar Foundation will unveil its first fundraiser in grand fashion with a wine of legends: the singular 27-liter bottle of 2003 Sine Qua Non The Inaugural Syrah. The 100-point wine, a generous donation from The Wine Advocate founder, Robert M. Parker, Jr., will be served at “A Goliath 60th Celebration” benefiting St. Jude Children’s Research Hospital® and its mission of “Finding cures. Saving children.®” on Saturday, May 14. The wine will be served alongside dinner prepared by James Beard award winning chef, Nancy Silverton and Steve Samson, chef and owner of Superfine and Rossoblu. 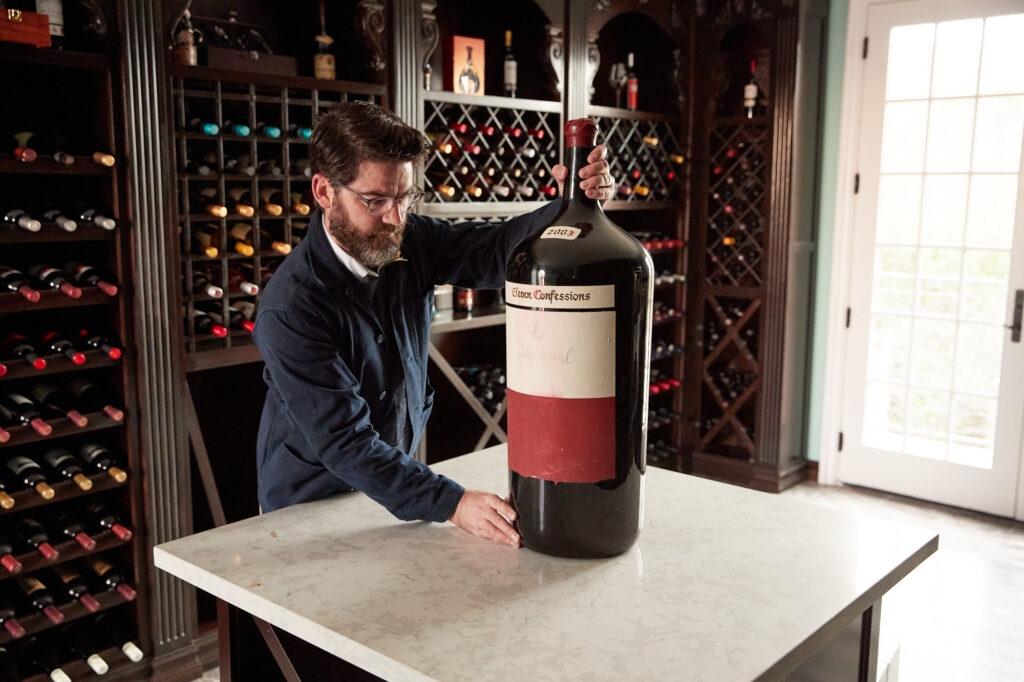 The intimate, unprecedented affair will be held at a private residence in Bel Air, California. The opportunity to savor the one-of-a-kind wine and dinner is limited to 60 St. Jude supporters to commemorate the 60th anniversary of St. Jude Children’s Research Hospital, founded in 1962. The evening will honor the legacy of St. Jude founder Danny Thomas and his family, which has carried on his dream. Thomas’ vision for the organization was as rare today as it was then: a research hospital where children with catastrophic diseases receive care and treatment regardless of their ability to pay.

“Through the generosity of Robert M. Parker, Jr. we are thrilled to support his desire to raise much- valued resources for St. Jude Children’s Research Hospital with this incredible wine, the only bottle of its kind,” said Garth Hodgdon, director of The Legacy Cellar Foundation. Attendance is in such high demand that much of the event is already committed and Hodgdon estimates that a minimum of $3 million will be raised through the once-in-a-lifetime dinner. Tickets may be purchased by contacting St. Jude here.

Because of generous donors and events like this, families never receive a bill from St. Jude for treatment, travel, housing or food, so they can focus on helping their child live. Plus, treatments invented at St. Jude have helped push the overall childhood cancer survival rate from 20% to more than 80% since it opened in 1962. St. Jude won’t stop until no child dies from cancer.

“We are so very grateful that the Legacy Cellar Foundation will help celebrate 60 years of St. Jude advancing lifesaving research and treatment,” said Richard C. Shadyac Jr., president and CEO of ALSAC, the fundraising organization for St. Jude Children’s Research Hospital. “The funds raised from this gala will make a difference now and in the future of childhood cancer patients by helping St. Jude with its six- year, $11.5 billion strategic plan which includes tripling its global investment and impacting more of the 400,000 kids around the world with cancer each year.”

The inaugural fundraiser for The Legacy Cellar Foundation champions its mission “to convert wine collections into charitable donations – bringing a previously untapped source of funding to the philanthropic sector, enabling greater positive impact and ensuring curated wine collections will be enjoyed by future enthusiasts.” Parker, who plans to pull from his impressive wine collection to raise money for causes important to him and his family, personally selected St. Jude for this initial donation.

More than 20 years ago, Parker, who is widely regarded as the most influential wine critic in the world, recognized the exceptional quality of the harvest and tasked Sine Qua Non’s winemaker, Manfred Krankl, with a commemorative, Goliath bottle. He sought to one day open the bottle for a special occasion, and now, in recognition of the bottle’s tremendous worth, is donating the wine to raise money for St. Jude.

“I’m thrilled to be a part of the inaugural fundraiser for The Legacy Cellar Foundation, which provides an innovative new model that makes it possible for me to give 100% of the proceeds from the donation of this wine to St. Jude Children’s Research Hospital,” said Parker. “This incredibly special one-of-a-kind bottle from my personal cellar will be converted into a multimillion-dollar gift to honor St. Jude’s Goliath 60th anniversary and advance cures, and means of prevention, for pediatric catastrophic diseases through research and treatment.”

The 2003 Syrah is the first made entirely from Sine Qua Non’s Eleven Confessions’ vineyard in the cool Santa Rita Hills appellation. Made from 97% Syrah and 3% Viognier, the wine was bottled in 2007 after 38.5 months of aging in French oak. The 2003 vintage precipitated what has become a storied and magical career for Krankl. Parker’s 100-point review of the wine by The Wine Advocate described it as:

“The mind-boggling 2003 The Inaugural Syrah is an emotional experience to taste as well as drink. Aged 38 1/2 months in French oak, it was fashioned entirely from the Eleven Confessions Vineyard, which is planted with Syrah clones #470, 174, and the Estrella River and Alban field selections. This stunning Syrah boasts a magnificent bouquet of spring flowers, blueberries, blackberries, charcoal, licorice, and roasted meats. It hits the palate with remarkable intensity, purity, and full-bodied power, but it somehow manages to dance across the taste buds with the gracefulness of a ballerina.”

Enlisted to prepare a main course to match such an exceptional wine is none other than Silverton, who famously founded La Brea Bakery and later Campanile with her former husband, the late Mark Peel, and Krankl, who led the wine program for the James Beard Award-winning restaurant. After the sale of La Brea Bakery in 2003, Krankl dedicated his full efforts to Sine Qua Non and it was that same year that the 27-litre bottle of Sine Qua Non The Inaugural Syrah was bottled.

Silverton attended Le Cordon Bleu in London and launched her culinary career in the early 1980s as pastry chef of Wolfgang Puck’s original Spago, during which time she penned her first cookbook, “Desserts.” After selling La Brea Bakery, which had become the largest artisanal bakery in the United States, she opened Osteria Mozza, Nancy’s Fancy and Pizzette. Silverton was most recently named Culinary Ambassador of The Farmhouse at Ojai Valley Inn.

About The Legacy Cellar Foundation:

The Legacy Cellar Foundation is a 501c3 donor-advised fund that will collect, authenticate and liquidate wine collections for charitable purposes. The organization’s mission is to convert wine collections into charitable donations – bringing a previously untapped source of funding to the philanthropic sector, enabling greater positive impact and ensuring curated wine collections will be enjoyed by future enthusiasts. More information about The Legacy Cellar Foundation and upcoming events can be found on the website at www.legacycellar.org, as well as on Facebook and Instagram.

St. Jude Children’s Research Hospital is leading the way the world understands, treats and defeats childhood cancer and other life-threatening diseases. Its purpose is clear: Finding cures. Saving children.® It is the only National Cancer Institute-designated Comprehensive Cancer Center devoted solely to children. Treatments invented at St. Jude have helped push the overall childhood cancer survival rate from 20% to more than 80% since the hospital opened more than 50 years ago. St. Jude won’t stop until no child dies from cancer. St. Jude shares the breakthroughs it makes, and every child saved at St. Jude means doctors and scientists worldwide can use that knowledge to save thousands more children. Because of generous donors, families never receive a bill from St. Jude for treatment, travel, housing or food so they can focus on helping their child live. Visit St. Jude Inspire to discover powerful St. Jude stories of hope, strength, love and kindness. Join the St. Jude mission by visiting stjude.org, liking St. Jude on Facebook, following St. Jude on Twitter, Instagram and TikTok, and subscribing to its YouTube channel.