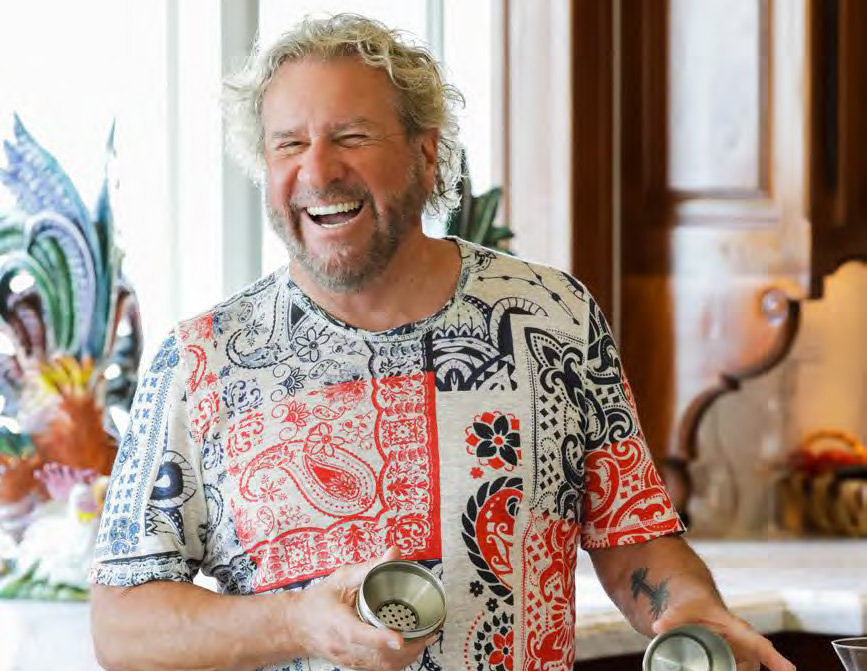 Hagar’s debut cocktail book brings his party rock anthem, “Mas Tequila!” to life with a collection of recipes paired with some of the Red Rocker’s greatest memories. “I wrote this book for the Redheads,” said Hagar of his dedicated fans. “I have been working and studying the art of making and drinking cocktails for decades now and have finally pulled together all of my favorites, my knowledge on how to do it, and what you need to throw the best parties with the best cocktails. I guarantee this is the only cocktail book you will ever need.”

Hagar’s longtime friend, Fieri wrote the forward for the book, in which he notes, “One of the greatest things about Sammy is how he loves to share all of these experiences with his friends, family and fans, and this book is a perfect example of that.” The recipes have earned praise, which are documented in the book, from famed foodies and rockstars alike. They include world-famous chefs Emeril Lagasse and Michael Mina, music legend, Toby Keith, Patrón Spirits founder, John Paul Dejoria and Campari Group Chairman, Luca Garavoglia.

Hagar created his Cabo Wabo Cantinas and Sammy’s Beach Bar & Grills as a place where people could hang out with their friends and families while enjoying cocktails and soaking up the unique cultures of the places he enjoys most; the recipes in Sammy’s Cocktail Hits: 85 Personal Favorites from the Red Rocker reflect those differences.

“Sammy Hagar’s Cocktail Hits: 85 Personal Favorites from the Red Rocker” is priced at $29.99 for hardcover and $19.99 on Kindle. Additional information is available at http://www.redrocker.com/cocktailhits.

For more than four decades, Sammy Hagar has been recognized as one of the best and most accomplished lead singers and songwriters in rock music. From breaking into the industry with the seminal hard rock band Montrose, to his multi-platinum solo career, to his ride as the frontman of Van Halen, Chickenfoot and his latest best-selling supergroup The Circle, Hagar has amassed 25 Platinum albums on sales surpassing 50 million worldwide. Along his journey, he has set the tone for some of the greatest rock anthems ever written with songs like “I Can’t Drive 55,” “Right Now,” and “Why Can’t This Be Love” and earned the highest respect of the music industry with a Grammy Award and induction into the Rock and Roll Hall of Fame. Since launching his flagship Cabo Wabo Cantina, he’s turned a lifelong passion for great food, music and spirits into a thriving and iconic lifestyle brand that now encompass top-shelf labels, Cabo Wabo Tequila (sold in 2008), Sammy’s Beach Bar Rum and Santo Tequila, as well as several restaurants. Never one to hit the brakes, Sammy’s also expanded his successes into publishing, TV, radio and beyond, including five seasons of his hit TV show “Rock & Roll Road Trip with Sammy Hagar” and as host of “Sammy Hagar’s Top Rock Countdown,” a weekly syndicated radio show broadcast airing on 90+ US stations. He’s also a #1 NYT bestselling author and dedicated philanthropist. Visit RedRocker.com for more information.

James O. Fraioli is a James Beard Award-winning cookbook author. He has more than 40 published titles to his credit. His celebrated books have been featured on the Food Network, The Ellen DeGeneres Show, and in O, The Oprah Magazine, Vogue, People, Forbes, The Wall Street Journal, and The New York Times. He is the founder and president of Culinary Book Creations. Visit www.culinarybookcreations.com.

Haven’t done a “round-up” article in a long time. That’s where I ask pals on … END_OF_DOCUMENT_TOKEN_TO_BE_REPLACED