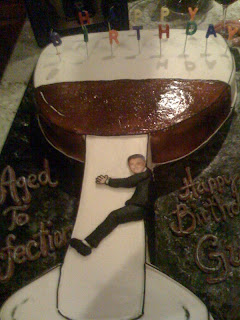 What does the owner of the classiest wine bar in town do on his birthday? What do you give him as a gift? And how can you surprise a Wine Guru?
These questions, and many more, can be found…gee let’s see…right here:
A few weeks ago I got a message via Facebook that Helen LaPrairie was planning a surprise birthday party for her husband, Guy Lelarge, owner of Valencia Wine Company.
Yes, we were free that night, and as it turned out, so were most of the regulars. We were to take Guy to dinner at 7, be back by 8:30, for the start of the Helen LaPrairie band’s first set that night.
Larry M. (known as Wall-E to me as he calls me Evaaaaaaaaa) made the dinner arrangements. Helen kept all a secret. But, as Guy got closer to his birthday he had a few more surprises, some of his family from Canada had flown in: son Matt and cousins Patrick and Elise. And, being the proprietor of a wine bar, well suffice to say, the party began before dinner.
Ten of us met us at the bar beforehand, each purchasing favorite bottles for dinner, then we “took over the street” as we meandered over to Salt Creek Grille and to the private dining room.
Guy brought a Miner Syrah that I sort of stole from his end of the table as my end was loaded down with Bordeaux: 2000 Chateau Haut-Tayac Margaux, 2006 Chateau Pedesclaux Pauillac and 2000 Chateau Franc Patarabet. There was a Chateauneuf-du-Pape and a Spanish and a Super Tuscan wine and…but this wine 101er did NOT drink everything.
We got back to Guy’s bar just in time for the band to sing the Beatles birthday song, walk through crowds of guests with – you guessed it – raised wine glasses and gassed up balloons dangling their curled ribbons framing it all.
Guy was surprised and elated to come back to his bar filled with friends. Between the dinner crowd and the bar crowd I spied a few readers: Helen and her great band, Kevin O, Dave and Nancy B, Steve and Rose C., Larry and Jennifer, Kim and Randy, Bill and Mo, John and Sandi, Tim and Erin, Rex B, Greg J…
Not sure what others gave Guy, other than the dozens of bottles they purchased and consumed on the premises, we tried hard to come up with something different.
Recalling that one of the Napa Cabernets we enjoyed at the LA Wine Fest last weekend was labelled with just one large word on the label, “GUY” made by a guy from New Jersey that certainly didn’t pronounce it with a French accent, we ordered one. (http://guyriedelwines.com/index.html)
As it didn’t arrive in time we put something else in the wine gift bag, another find from the Fest: SanTasti (http://www.santasti.com/index.php) palate cleansing beverage that promised to “reduce tannin buildup” among other things. Guy popped that puppy right open.
At this point, though Guy would return to his wine, I was refilling my smaller stemware with tap water every few minutes from the bar’s sink. One guest did comment that I would ruin my reputation doing this. I was left thinking I have no worrisome reputation, beyond wine 101ing it, but Guy’s reputation was intact, as always, with class.