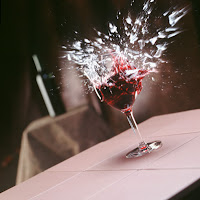 Associated Press WAMSUTTER, Wyo. —
Battling an intensely hot fire after a semitrailer crashed on Interstate 80, emergency crews were surprised to find themselves suddenly fired upon – by corks from exploding wine bottles inside.
“The corks were popping out of the bottles like the old Jiffy Pop we grew up with,” Wyoming Highway Patrol Lt. Scott Keane said. “My trooper got hit in the arm with one.”
The fire Thursday was so intense it burned the trailer down to its axles, melted the tires and damaged about 75 feet of pavement.
Besides the heat and flying corks, firefighters also had to deal with shattering bottles.
But Keane says no one was injured, and the truck driver, Cyndy Brown of Arkansas, escaped the fire. Keane says the wreck likely was caused by a locked brake or hub malfunction.
Theresa Herbin, public relations specialist for the Wyoming Department of Transportation, said the wines – various bottles of Merlot, Pinot Noir, Reisling and sparkling wine from Washington and Oregon – have retail value of $20 to $50 each. The total value of the loss was not available.
“There’s nothing left of the cab or trailer,” Herbin said. “There were a few bottles that didn’t explode,” but they vanished overnight. http://cms.firehouse.com:80/web/online/News/Wyoming-Crews-Dodge-Corks-in-Wine-Truck-Fire/46$65328
My husband sent me the above link. I found it another good reason to switch from cork to screw cap closures. But, the funny part for us was …the very last line of the story.
I mean really, after the wine bottles spewed their venomous corks, firefighters were injured, the flames so bad that nothing was left of the cab or trailer what in the hell did the thief think this wine would taste like? Was it curiosity? A souvenir? Or just a reminder that I need to hold a wine class for my husband’s platoon?