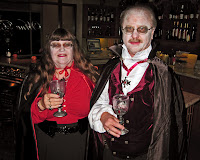 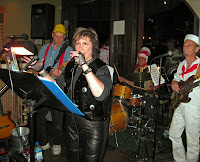 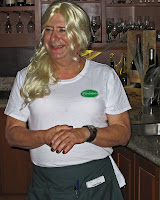 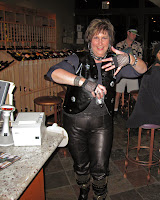 For the seventh straight year Valencia Wine Company has opened its doors to the after world allowing goblins, ghouls and witches to come together for a Halloween Bash. And yes it was a graveyard smash. We had Sookie and Bill from True Blood, the Village People, gladiators and damsels, doctors, nurses, hippies, counts and countesses, etc, etc, etc. Even Jon and Kate plus 8 showed up with all kids in tow as they were unable to find a babysitter.

To awaken the crowds from their usual morbid state The Helen LaPrairie Band rocked the crowds throughout the night with many of the classic rock and roll tunes that we all know and love. Even Kevin dropped his role as server for VWC and got up on stage with the band and sang a couple of tunes from the Doors. Guy, Helen and the Band were all dressed as the Village People. And yes, they did YMCA with a very enthusiastic and participating crowd. There was standing room only both inside and out as the night went on.

VWC provided some very nice gifts for the best and worst costume, most unusual, funniest and best makeup.

The comments that I was hearing from various patrons were that of pleasure and enjoyment. With such a fine selection of wines to chose from and the entertainment provided by VWC, as well as the guests, was fantastic.

A few weeks ago I received an email from Naushad Huda, the “Voice of Modern Wine … END_OF_DOCUMENT_TOKEN_TO_BE_REPLACED