When was the last time you drove up to Agua Dulce Winery?   Was it to picnic in or around the new gazebo with 10 dozen other friends (yes, the gazebo is that big), for a car show or maybe a wine club party?

I was a member of the winery years ago, when it had different owners and was known as Agua Dulce Vineyards, and I looked forward to trying some of the new activities they have going on now, and this day we would be starting with Blending 101. 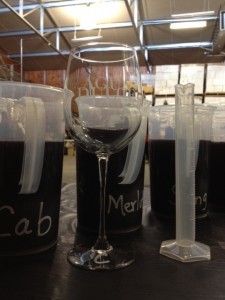 and Cheryl Dellepiane joined me for the day’s activity.  We met in the tasting room – which was filled with happy wine tasters up and down the same expansive bar I remembered – and then were whisked off to the winery.

Once in the cool barrel room we saw that our mad-scientist work areas had been set up: Large plastic pitchers of 100% Cabernet Sauvignon, Merlot, Sangiovese and Syrah; plastic vials that measured up to 25 ml; three wine glasses marked “A”, “B” and “C”; small paddles for stirring; black labels and silver markers.

And of course, there were napkins for spilling, the necessary pour out buckets, water bottles to keep us hydrated, and crackers to cleanse our palates.

Cathy MacAdam, assisted by two others, led the class.  Cathy was like a wine-cheerleader – she waved her arms as she excitedly spoke about traditional wine blends, bent down to the concrete floor to explain the rich soil and constantly engaged the group asking us to share what we liked.

Then we got down to the class.  We were first to taste all four wines separately, to see what we liked but also to think about the varying characteristics of each; and how they might benefit by blending.

Cathy instructed us to fill the vial no more than three times: 25 ml x three would be 75 ml in the glass and just the right blend to be duplicated in the 750 ml bottle.

I set off right away with two parts Merlot to one part Syrah, then, getting into it, I tried two Syrah to one Merlot, two Cabernet to one Sangiovese and finally two Merlot to one Cabernet.  While I stuck with only two varietals in my blending, others, like Cheryl and Kevin were mixing up to four, and of course, in less than 25 ml components.

Using my little paddle I stirred each, and then swirled a bit more.  Right off I noticed that all of the wines benefitted with blending.  Sure, this was a mini version of what the professionals do, but I could see for myself why they do it.  And how painstaking the process must be for a winemaker. 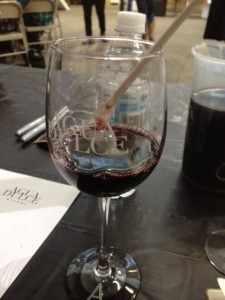 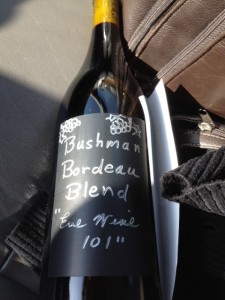 My favorite blend, to be duplicated in bottle, was the two Merlot to one Cabernet ratio.  I asked Cheryl, who has better handwriting, to do my label for me.  It now reads, “Bushman Bordeaux Blend, Eve Wine 101” – and she even drew two grape bunches on the top!

We were all pretty much completed with our blending in an hour.  Cathy then instructed us to join her up front where she would take the notes of our blends, and multiply them to fill a bottle.

We then selected our cork – all of the corks were the same size, but they sure are bigger before they get squeezed into a bottle – and we used a big hand-corking machine to seal them up.

We were to wait about 15 minutes for all of the bottles to be ready.   While the guests were prompted to return to the tasting room, where delectable sandwiches, cheeses, nuts and fruits had been laid out for us, I dragged my party to the grounds behind the tasting room.

They hadn’t seen the gazebo before, and on this mild afternoon, several people were picnicking with their favorite Agua Dulce bottles.  We then meandered into the vineyard where Cheryl noticed that the bud break had begun. 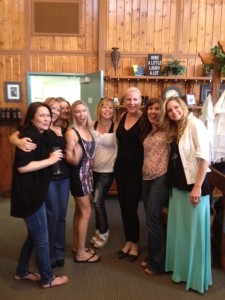 Me in all black, thrilled with "fans" that wanted to meet me. (Really?)

Back in the tasting room we chatted it up for a bit, when suddenly Steve Wizan, the general manager, came up and told me I had “fans” that wanted to meet me.  I found this quite surreal, but nevertheless, there was a group of about 8 very pretty 20-somethings celebrating a birthday, two of which actually did want to meet me and regale me with stories of their wine ta

Cheryl summed the blending of the day, from start to finish, as: “The whole is greater than the sum of its parts.”

LOVINGSTON, Va./PRNewswire/ -- Virginia Distillery Company and members of the … END_OF_DOCUMENT_TOKEN_TO_BE_REPLACED