One of the benefits of getting an allocation from Turley Wine Cellars, whether you buy a lot or a little, is you have the option of having your wine shipped to you or picking it up at their semi-annual Pick Up Party. When at all possible, going to the Pick Up Party is the best option – really a no-brainer. 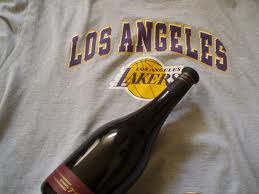 And, while we can’t make all of these events due to other commitments, we did manage to attend the party on November 9th in Paso Robles, after what for us was a year-and-a-half hiatus.

The event has gotten so popular that it has now been split in two – reservations can be made for either 11 AM or 1 PM. Valet parking has been added as well, all to make the experience that much more enjoyable for the attendee.

Delicious food is always served – in this case we got to feast on short rib sliders, empanadas, pizza and more. But, the star is always the wine.

On the verandah, the just released 2012 Juvenile Zinfandel was being poured. Turley makes a lot of Zinfandels, over 20, most of which go into their single vineyard bottlings.

But, some from younger vines go into their Juvenile designation, which at $22 is a great bargain for a wine of this quality. Usually, this wine isn’t released until the Spring, but they were offering it a few month earlier than usual. It definitely tasted ready to me.

In the tasting room, they were offering samples of two more Zinfandels, single vineyard this time from the 2011 vintage, one from the Pesenti Vineyard and the other from the Ueberroth Vineyard. Both of these properties are in Paso Robles; in fact the Pesenti Vineyard is the property that Turley occupies in Paso Robles, having acquired the Pesenti Winery in 2000. It was fun discussing with attendees which they preferred – to me both were great, but the Ueberroth was seemed to be drinking better on that particular day while the Pesenti, although delicious, could benefit from a little more time in the bottle.

My fondness for Turley Zinfandels is well known, but if anything exceeds the quality of their Zins, to me it is their Petite Syrahs. Winemaker Karl Wicka was providing barrel samples of the 2012 Pesenti Petite Syrah, which was tasting ready to drink.

Tastes of the 2006 Hayne Vineyard Petite Syrah were also given. While Turley produces wines from many vineyards, the Zinfandels and Petite Syrahs from the Hayne Vineyard in Napa could certainly be considered its premium offerings, and it was a real treat to taste a Petite with a little age on it, as my Turleys tend to go much quicker than that.

As usual, there was plenty of opportunity to not only interact with Paso Robles winemaker Karl Wicka, but also with owner Larry Turley and Christina Turley, director of sales and marketing.  And tasting room manager Malani Anderson did her usual great job of keeping everything running smoothly.

Here are a couple of newsworthy items you may have missed:

When we started out tasting that day, even before the Juvenile Zinfandel, we had a taste of Turley’s Cabernet Sauvignon. Only in its second vintage [2011], this is from the Turley Estate in St Helena. It is called The Label, which is a reference to a comment that Larry Turley made in a 2004 interview, when he said Zinfandel lovers drink the wine but people who prefer Cabernet drink the label.

And huge news for Zinfandel lovers, if you haven’t already heard, about a year ago Turley Wine Cellars acquired the Karly Winery in Amador County. We used to drink a lot of Karly wines, and have visited the property as well as other wineries in the area, but in recent years had kind of lost track of them. It is good to see the winery is in good hands. Amador County has some of the oldest zinfandel vines in California, and now that Turley has opened their tasting room [and is even having Pick Up Parties there], that would make a great excuse for a wine lover to visit the area.

Love reviewing bubbly, and this time it was a Piper Sonoma Brut NV from Sonoma! … END_OF_DOCUMENT_TOKEN_TO_BE_REPLACED