Chef David Lentz announces big news for 2015 at the Santa Barbara location of The Hungry Cat as he introduces Peter Cham as the restaurant’s new Chef de Cuisine along with some new menu selections beginning January 8, 2015 and a menu revamp launching February 1, 2015.

Cham, who has staged with top culinary talents Michael Tusk at Quince and Jennifer Lorenzo from The Fifth Floor, both in San Francisco, has recently arrived from Massachusetts where he worked under Matthew Gaudet, a 2013 Food & Wine Best New Chef.

Peter Cham was born and raised in Santa Barbara and received his training in the Culinary Arts at San Francisco City College. Cham has worked professionally as a cook since 2008, demonstrating a rapid rise in his career and indicating great promise. General Manager Bob Van der Veer continues to oversee the operation and will ensure that Cham is familiarized with the Santa Barbara community and The Hungry Cat devotees. “Peter brings a sense of professionalism that is welcome and refreshing,” says Van der Veer. “His positive attitude and affable presence will be hard to miss.”

David Lentz states, “We considered a lot of chefs for this position in Santa Barbara and felt that Peter would fit right in at The Hungry Cat. When we tasted his food, it was clear that he shares a similar sensibility towards our style of cooking and that he shares my passion for seafood. He’ll make a great contribution to Santa Barbara.”

In addition to The Hungry Cat’s signature Raw Bar and craft cocktails, new dishes to watch for include Pink Snapper Crudo with Granny Smith Apple, Candied Fennel, Wood Sorrel, Pernod Aioli, Fried Chick Peas and Sambal Vinaigrette; Fried Brussels Sprouts with Gochugaru, Toasted Peanuts and Fish Sauce Caramel; Squid Ink Tagliatelle with Charred Radicchio, Black Garlic Pesto, Tuscan Kale and Boquerones; and Black Cod with Baby Turnips, Broccolini, Sunchokes, Little Neck Clam, and Lemon Grass Dashi. A completely new menu will be unveiled on February 1, 2015. The restaurant will be temporarily closed on Mondays as Lentz and Cham work together during the transition. In the first week of February, The Hungry Cat Santa Barbara will resume Monday operations as well as Weekend Brunch on Saturdays and Sundays from 11 am to 3 pm. 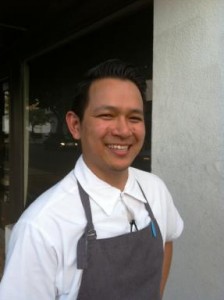 Daily operating hours will resume in February, including brunch

Chef /Owner David Lentz creates a new American Seafood sensibility, inspired by his Maryland roots, incorporating sustainable, seasonal fish, shellfish and produce into his weekly changing menus. This Santa Barbara location brings it all together with its urban setting, complete with signature raw bar, perfectly mixed artisanal cocktails and camaraderie at the bar and tables.

For further information and full menus at The Hungry Cat, visit www.thehungrycat.com

The Hungry Cat and David Lentz are Social!