Greetings! It has been said that there is often more than meets the eye. This is certainly the case of Soave, home to Italy’s leading white wine of place. Soave dates back to 1931 when, along with Chianti, it was among the first two regions to be geographically delineated in recognition of both its impressive popularity and importance to Italy’s wine market.

Fast forward some 80 years later and we find this dynamic region is again flexing its muscles, led by terroir-driven Cru bottlings and complex hillside efforts which, when complemented by the lush dessert Reciotos and small amounts of bubbly (yes, there is Soave Espumante), paint a much more complex picture than what meets the eye!

Soave is a key DOC in the Veneto and is the most heralded white wine region in Italy. In fact, Gambero Rosso reviewed over 100 Soaves for 2015 (as opposed to just six in 1991) and awarded five Soaves with the coveted “Tre Biccheri” designation. 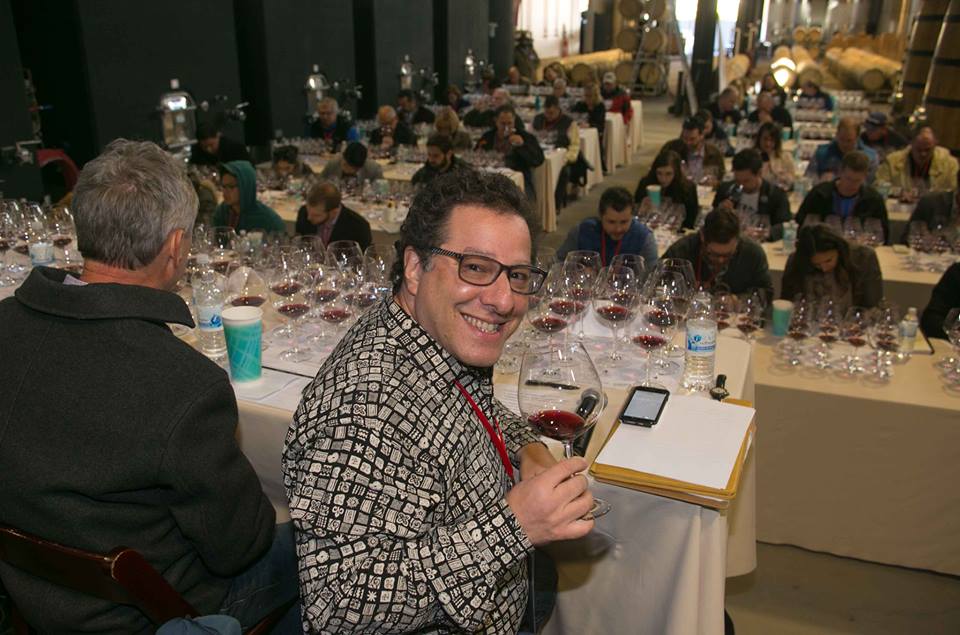 Led by Master Sommelier Evan Goldstein and Soave Consorzio Tutela’s Goivanni Ponchia, we did what Goldstein called a “kick start blind tasting” of ten wines to begin my education. Best to have them fresh and cool rather than sitting in front of us for a while, in what Goldstein called a “Sadie Hawkins” tasting, and then have the lecture afterwards. Ponchia agreed with Goldstein, that the wines should be tasted cold. We would taste 17 in all by the end of the lunch and the conclusion of our 3 1/2 hour tour of Soave.

As I would have zero chance whatsoever of making an educated determination of which wine was in which glass I looked for general aromas and flavors that I found in most. I was sitting at the big kids table of experienced wine buyers…slightly intimidated by some snobbish remarks towards others but I muddled through.

Color: All clear, with varying degrees from pale yellow to pale gold.

Aromas I found: Peach, pineapple, creamy unsalted butter, jasmine, brown butter, lemon zest, lemon furniture polish, browner/darker ones had some hay/oak aromas, and some were more pungent while others had a paler taste.

Our last wine, #10, must be their version of a late harvest or made from grapes with Botrytis. Caramel, butter, cling peaches and candy apple on the nose followed by a full mouthfeel of honey and buttered popcorn.

Conclusion for Wine 101ers: I found that the aromas and flavors were very similar to a Sauvignon Blanc but with much less annoying acid and more fruit. Would be lovely cutting through a sharp cheese or creamy pasta sauce, and equally nice with a chilled seafood salad or fruit compote on pancakes.

Wines Revealed Were From: Latium, Stefanini (about $12 retail), Cantina di Soave (1 of every 2 bottles made in Soave and the greater area is from Cantina di Soave and the one we tasted retails for about $15 retail), Cantina de Gambellara, Sandro De Bruno, Cantina del Castello (used to use barrels now only stainless steel vats, volcanic soil, $17 retail), Vincentini Agostino (gets 40 tons per acre), Gini, Monte Tondo and Franchettto. Our sparkling was from Riondo, retailing at $9.

Soave is near to Verona if you are visiting Italy.

Ponchia said there are two main DOCG municipalities, Soave Superiore DOCG and Recioto Di Soave DOCG. About 82% of Soave is exported; in 2002 more was added to DOC production (see map). Delineations are not yet noted on labels as not to confuse consumer.

Goldstein explained a little history of the wine. There is an iconic castle in the center of the town of Soave proper. Soave was the leading white wine while Chianti was the leading red. The Cru system was revisited in 1971 on the labels. Also in the 70’s names, like Soave, took off and became wildly popular. “Now is the time to re-impress people,” Goldstein said. Four percent of DOC wines from Italy are under the Soave appellation.

There is rare barrel use and the wineries are pushing a sense of place and terroir. Goldstein recommended that we all read the thick text, “Native Wine Grapes”, as it’s the best comprehensive lesson on Italian wines.

The grape, Garganega, “is a chameleon” in that it’s an old and prolific grape. Some chardonnay was planted but it’s not on the rise in Soave. Vines are not pulled out and replanted at a 30 year prime; instead they can go 35 to 40 years, some over 100 years, before the winery chooses to replant. A Soave mush have 70% Garganega, and only up to 5% of any other grape varietal may be added.

The soils in Soave range. They can be dark volcanic on northern and eastern parts, and produce richer wine that requires more time for ageing; while the southern and western side is calcareous, producing a more linear and floral taste, and ripening earlier.

The first course, calamari and shrimp, was served with a 2014 Dal Cero (sweet pear flavors) and the 2014 Fattori (tangy grapefruit).

Our second course, Risotto with sausage and Parmesan cheese, was paired with a 2013 Casarotto (acidic lemon-lime) and 2013 Suavia (peach and pineapple).

The third course, Veal Scaloppini, Prosciutto and Sage, was alongside a 2013 Marcato (honey and cantaloupe) and 2013 Cantina di Monteforte (pear and sweetened green tea).