The Southern California Whiskey Club had a special Friday night event with brand ambassador Jonathan Armstrong guiding us through the history and production of this famed Japanese company: The House of Suntory. “Founded in 1899 by Shinjiro Torii, the House of Suntory has pioneered the art of Japanese whisky. This event is for everyone interested in whisky, from veteran connoisseurs to beginners, and will include a short Japanese whisky 101 portion to provide an introduction to the category.” 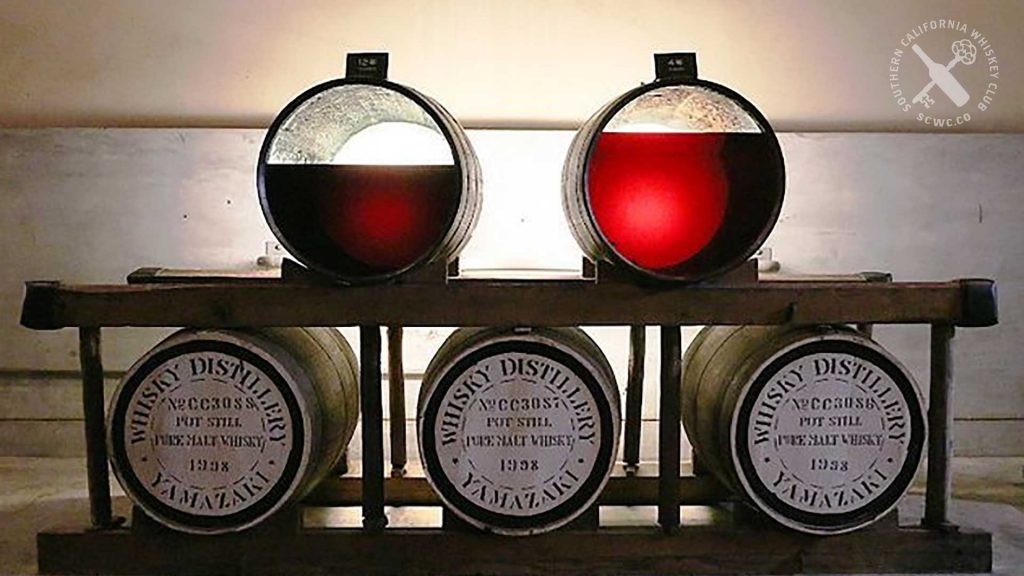 I had read two books on Japanese drinks, one completely devoted to whisky, to delve deep this is a link to my review of the book Japanese Whisky by Brian Ashcraft. Some of the same points were made by Armstrong: including, among other things, the use of Japanese white oak Mizunara casks and plum wine casks, and learning about Masataka Taketsuru, the founder of Nikka Distillery, who started his career in Scotland learning all he could about making whisky. From there he became the first distiller in Japan – at Suntory’s Yamazaki Distillery.

Armstrong also explained that Torii founded Suntory in 1899. The name Suntory is a nod to the Land of the Rising Sun (Japan) and Tory (Torii himself). In the beginning whisky was used for medicinal purposes. The imported Scotch whisky, blended it and sold it to their customers – including Taketsuru.

In 1907 they invented a “port wine” that was a blend of sherries and became a success. With the money they were making they were able to start the distillery in 1923. It was then that Torii went to both Scotland and France to learn what he could about both whisky and wine making. Consumption hit a high point in 1972 and they built a new distillery to meet demand.

Now, onto the tasting!​

Suntory Whisky Toki is a blended whisky, with a very light color, notes of cream, toast, apricot and apple. The Hibiki Harmony blend was made with five different types of casks, and exhibited aromas and flavors that included sweet caramel, roasted nuts and vanilla bean. Next we sampled the Hibiki 12 Year Old, a blended whisky that is no longer made! Another blend of whiskies and casks, this time three different ones, gave the whisky notes of smoke, almond, fruit, spice and mild salinity. The Yamazaki 12 Year Old had a really different nose from its predecessors: dried plum, berries, pipe smoke, kernel and cream.

Finally, the dram a lot of us were waiting for, the Yamazaki 18 Year Old was next to try. Armstrong explained that the 18 YO has a different recipe each time it’s made. He said it isn’t just the 12 YO with another 6 years. Destined to be my husband’s overall favorite, while I was quite happy with the Hibiki Harmony, the Yamazaki 18 YO was rich and layered, slight notes of golden raisins and a very full mouthfeel.

Taking a breath, and with two more whiskies to go, we jumped to the Hakushu 12 Year Old. This tasted a little peaty to me! Eddie thought I was nuts but lo and behold Armstrong said that the “bonfire” smoke was definitely there. Also contributing to the whisky were spicy hickory notes, one taster said it reminded them of beef jerky. And, finally we were on to our last whisky, the Hakushu 18 Year old. This last dram was all caramel, mango and mint – quite interesting and a nice finish to the tasting.​

Who likes sparkling wine? The ultimate wine for celebration, and celebrated as a … END_OF_DOCUMENT_TOKEN_TO_BE_REPLACED