There was a sold out crowd for the first wine pairing dinner between Reyes Winery and the new Thelma and Luis restaurant that I was lucky enough to attend.  The golden hue in the large dining room matched the sky outside – due to the still-burning Powerhouse Fire – and 70 Santa Claritans left their worries outside with it as wine after wine, and dish after dish, was served.

(I have to admit that I felt somewhat traitorous to Jason Park, one of my favorite chefs who recently departed the SCV with plans to move his popular Maru restaurant to a more lease-friendly address.  Thelma and Luis had taken over the Maru space.  And though it was a completely different experience, there was wine and good company, making it eerily similar.) 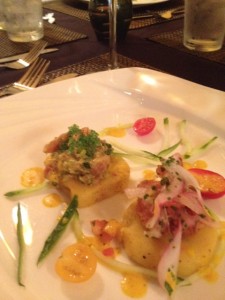 As guests entered the restaurant and were seated we enjoyed both a 2010 and 2011 Reyes Chardonnay served by Spencer, our very attentive waiter for the evening.

The first course (full menu is below) were two very different offerings on a “Causa potato cake”.  One, a tuna tartar with wasabi infused caviar, was really quite tasty with either Reyes Chardonnay as the wine softened the abrupt heat of the wasabi.

As I lingered over the pairing, and looked again around the room, I thought, “I’m enjoying gourmet dishes, in a new restaurant, there is wine in my glass, and all is right in the wine world.”

Robert Reyes, the owner and winemaker of Reyes Winery, got the crowd’s attention, “Welcome to Thelma and Luis!  Thank you for being here.”  Then Robert introduced his Marketing and Sales Director Beth Heiserman, who explained each dish as it was presented and the wine pairing.  (Beth is someone to know, not just because she manages Reyes Winery so well but also because she routinely whips things up at the winery – and her one-of-a-kind dishes are always infused with Reyes Wines.)

As our second course arrived, a crispy king salmon paired with a 2011 Reyes Zinfandel, Robert explained that the wine had been bottled just that day and it was unfiltered.  The label design –Robert has a different label for each wine, all of which are renditions of his own original paintings – was a 2013 Corvette.  The wine, called “Quinn’s Zin” had been named after his grandson who said he had liked the Corvette and wanted his grandpa to paint a picture of it.

The fish, with its Zin-infused citrus ginger sauce, was a surprisingly good pairing with the Zin.  Reminded me of winemaker Wes Hagen’s rule of pairing fatty fish with a tannic red wine, matching fat with tannins.  And the “crispy” salmon tasted similar to a salmon skin when it’s prepared for a Japanese sushi roll – again surprisingly good.

The Filet mignon with Gorgonzola and blueberry cab sauce with the 2010 Reyes Cabernet Sauvignon, was my favorite pairing.  I think our entire table agreed that the Reyes Cab was great with our without food, and we lingered over the course.   Went so far to ask for some rolls to lap up every bit of the sauce on our plates. 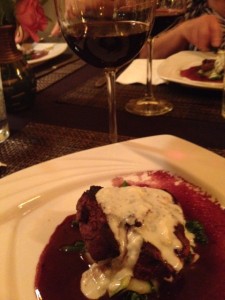 Robert explained that the Cab had received “three silver medals so far” and the label is his painting of the vineyard fountain that greets guests as they enter his circular drive.  Robert then shared that the winery has been commercial for the last two years and is proud to be carried in Whole Foods markets.

As the dessert was being served, Chef Luis came out of the kitchen and was greeted by a thunder of applause.  He stopped by every table to check in and meet the guests.  He was earnest, as was Robert and Beth, in insuring that everyone was enjoying the event.

Then came the last course, the crepe dessert, that’s what we were looking forward to.  I had them once before and was not disappointed.   Paired with Reyes White Delight – cold fruit salad, pear, yellow cling peaches, honey, floral – it was another excellent pairing of like with like.  Robert said that his White Delight is a White Port of Chardonnay, Muscat and Trebbiano.  For those of you that have not been to the winery, Robert said, you are officially invited to visit, find them on Facebook, twitter and reyeswinery.com 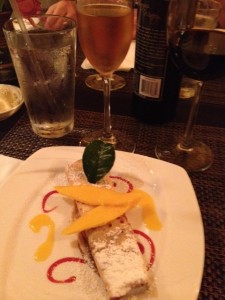