Since antiquity, the island of Corsica has been colonized by one Mediterranean power after another. First the Phoenicians, who gave way to the Carthaginians, followed by the Greeks, Etruscans, and eventually, the Romans. There was a time when even the infamous Barbary pirates controlled this sun-drenched and fertile island. It is also quite interesting to see how these various wine growing cultures have influenced Corsica over the generations. Though a territory of France, Corsican wines reflect their Italian influence. Today, three leading grape varietals, Nielluccio, Sciacarello, and Vermentino dominate the landscape. The wines they produce are clearly an expression of Italy’s wine making traditions.

Known throughout the region as the “Isle of Beauty”, Corsica does indeed live up to its reputation. Together with friend and fellow sommelier, Ivelisse Negroni, we have been exploring Corsica’s prolific wine regions. Though Ivelisse was primarily educated in France, she is from Ajaccio, Corsica, the birthplace of Napoleon Bonaparte. Today we have returned to Ajaccio to sample the local wines and have lunch in the city’s picturesque plaza.

“Grigorio,” she called for my attention. “I have selected some very interesting wines for our readers.”

“From indigenous grapes?” I queried.

“But of course, ”she replied in a tone that was matter of fact. “What is most interesting is the versatility of these wines. I believe this to be one of the primary reasons that over the past couple of decades, Corsican wines are growing in international popularity.”

Our first selection, Domaine Abbatucci General de la Revolucion Blanc 2010, is from the slopes of the Taravo Valley. It is a blend of six obscure varieties.  These include, 25% Caracajolu Biancu, 25% Paga Debitti, 20% Rimenise, 15% Rossola Brandica, 10% Biancone, and 5% Vermentino. On the eye, our wine is a pale yellow-stone in color. The nose is quite floral and filled with scents of wild chrysanthemums, lavender, mint, thyme, and tarragon. The entire bouquet is reminiscent of mountain air. On the palate, it is creamy, yet refreshing with notes of raw almond, pine nuts, melon, and citrus fruits. The finish is seemingly endless due to the interplay of flavors. The alcohol content is 14.5% with a price tag of $95.

“I must admit that when I first thought of the notion to blend six grape varietals,” I began to chuckle. “I did not expect to be so pleasantly surprised. What I discovered was by far, one of my most pleasurable wine experiences.”

“I knew that you would be pleasantly surprised,” Ivelisse openly displayed her pleasure. “This wine pairs nicely with any type of dish that is nut based. I love experimenting with it. Lately, I have been pairing this blanc with various types of roasted dishes.”

“These are obviously old vines,” I paused to collect my thoughts. “Roughly, what is their age?”

“They date back to the early 1960s,” she paused momentarily. “However, the vineyards have been completely biodynamic since 2000.”

“By the way,” I chuckled under my breath. “Who is the general the wine is named for? I know it could not be Napoleon. The emperor’s favorite wine was Chambertin.”

“Jean-Charles Abbatucci. He was a Brigadier general at the age of 25,” she paused on the moment. “He was a hero of the French Revolution.”

Our next selection, Domaine de Giobelli Cap Corse Blanc 2010 is made from Corsica’s fragrant Vermentino grapes, and partially fermented in cement casks. These egg-shaped casks are porous, and often preferred over traditional casks, by many Corsican wine makers who do not desire any oak character to their wine. On the eye it is a pale straw-yellow. The nose is filled with the aroma of blooming flowers and the slightest trace of scrubby herbs. On the palate it is subtly oily in texture and though pleasurable, a bit on the bitter side. The balance of citrus, lime, salt-tinged pineapple, and rosemary, gives this wine its character. The finish is long and invigorating. The alcohol content is 12.5% with a price tag of $32.

“Herb omelet?” I playfully teased. “Strozzapretti, is definitely a go.”

Corsica excels in Rose wines and Ivelisse ordered some very nice wines for our table. Our next selected, Yves Leccia Patrimonio Rose 2010 is filled with rhubarb flavor and muscular minerality. The grape varietal, Nielluccio, is Corsica’s primary red. One school of thought argues that this varietal is indigenous to Corsica, while the opposing thought is that it is a strain of Sangiovese. On the eye, this wine is Groseille, redcurrant, in color. The nose is floral and filled with the aroma of fresh strawberries. On the palate, it is filled with a nice balance of tart citrus and white melon. There are also traces of cucumber, and water melon. Overall it is medium bodied with medium acidity and a friendly finish. The alcohol content is 13.5% with a price tag of $27.

“I liked the crispness of this wine,” I nodded in approval. “I would pair it with swordfish.”

Agreed,” Ivelisse pursed her lips into a smile. “Nielluccio pairs nicely with fish and roasted meats.”

Our last selection, Coteaux de Cap Corse Domaine Pieretti 2012 is from the beautiful northern peninsula of Cap Corse. Lina Pieretti, one of the few women winemakers in Corsica, is responsible for this wonderful wine. It is a blend of equal parts of Nielluccio, Grenache, and Alicante. On the eye, it is coral-pink, bright and lively. The nose is filled with a bouquet of summer berries while the palate is delicate and fruity. This Rose unfolds nicely as it prevails its natural blending. The finish is long and smooth. The alcohol content is 12.5% with a price tag of $22.

“This Rose will pair nicely with most seafood,” Ivelisse was quick to add as she poured us both another glass.

“Undoubtedly,” I flashed her a quick grin. “It is dry and crisp, and will bring out most fish flavors.” 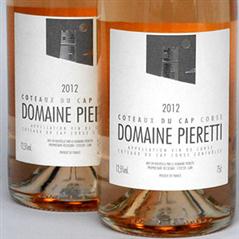 “By the way, both Lina Pieretti and Jean-Charles Abbatucci want to meet you,” her tone was warm and inviting. “Did I tell you that Jean-Charles is a direct descendent of the general?”

But that my friends, is a different story …”

Have you had a Boulevardier or a Negroni before? Both have only three simple … END_OF_DOCUMENT_TOKEN_TO_BE_REPLACED